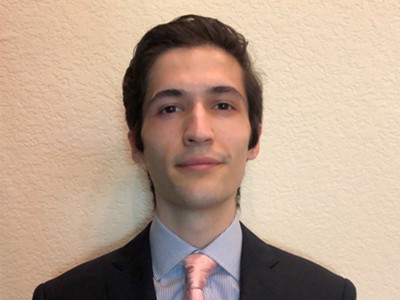 Born in Alabama, Rowan Sankar lived in India for two years before moving to the Dallas area in 2006, where he discovered First Presbyterian Church of Plano, Texas.

Even in a youth group with a membership alternating between 3 and 4, “there were many opportunities afforded to us, which helped me grow as a person and a leader,” Sankar, 23, said this week. Following conferences or youth retreats, “the congregation always wanted us to bring back what we learned, because it made our (faith) community stronger.”

Sankar, a 2019 graduate of Baylor University, was elected to be Grace Presbytery’s Young Adult Advisory Delegate (YAAD) to the 224th General Assembly, the first in the long history of the Presbyterian Church (U.S.A.) to be conducted online. The virtual assembly, which can be viewed here and here, begins at 7 p.m. Eastern Time on Friday, June 19, with the first plenary session and features the election of co-moderators.

Even though his GA experience will be limited to what he sees and hears on a computer screen or mobile device, Sankar said he’s excited to interact with “people who are completely different, but still hold the same core beliefs I do.” He said looks forward to “meaningful discourse” over universal challenges including race and the pandemic. “I think it’s an important time to be involved,” he said. “I was raised with beliefs of acceptance and inclusion and being good to fellow men and women, and so I want to be part of that conversation. I want to provide a voice that I think needs to be heard.”

Sankar said he looks forward to a Thursday virtual training session for YAADs. In advance of that, he’s spoken with YAADs who have served during previous assemblies as well as presbytery staff. “They have been really supportive about what I need to do,” he said.

Sankar was born to immigrant parents from India and lived in Alabama for the first seven years of his life. His parents divorced in 2004, when he and his mother moved to India. It was there he was first exposed to a number of religions — Sikhism, Buddhism and Hinduism in particular. His mother died in 2006, and he relocated back to the United States. His father then married a white woman.

“My whole life I’ve had fair skin,” he said. “I am treated as if I am white, especially when my dad and step-mom are walking with me in public. People say, ‘I see how this family works.’ It’s interesting — I know I am 100% Indian. I believe my life experiences have given me an introduction into life as multiple races.”

He said he’s particularly keen on hearing from denominational leadership during GA.

“Having been around the church for a significant time now, I’ve always wanted to understand how we as a (Presbyterian) community come together and agree on certain foundational principles,” he said. “How do we decide how we as a church wants to move forward?”

“I look at (GA) this way: This is a safe environment to ask questions without fear of people attacking me or judging me,” he said. “What questions can we ask in a divided world?”

Sankar had this take on what can be for some the biggest drawback to serving as an advisory delegate: during the assembly he has voice but no vote.

“It’s interesting,” he said. “Part of me thinks I can have an opinion that deserves to be represented, but I am conflicted. When you’re young, you’re a little more passionate, and sometimes we fall into a trap of extremism. My background is in psychology (his degree from Baylor University is in neuroscience), and I understand I can get very emotional about my opinions. At some level I understand why the precedent is there for our vote not to count.”

He said he will consider his participation in the 224th General Assembly a success “if I can learn from it and make meaningful connections with the people I interact with.”

“I will try to contribute, but I really want to learn,” he added. “This will be a fantastic experience, and our decisions will have impact on people around the world. We’re all going to have to be thinking straight, regardless of all the uncertainty that’s going on.”