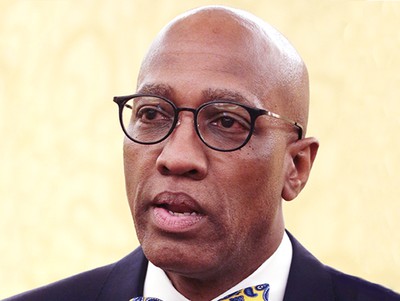 The Reverend Dr. J. Herbert Nelson, II, offered regrets that he could not deliver the greetings in person, but assured membership of the connection between the two churches.

“We are still brothers and sisters in the faith and in the work we have done historically as well as through the way we’ve continually communicated,” he said.

Conference attendees met to discuss changes in Korean society and the world as a result of COVID-19 and also to set the direction and goals of the General Assembly of the PCK and Korean churches in the future. The group also met to consider strategies and direction for revitalizing ministries, Christian education and mission.

“I want to thank you for the way by which you have actually set the tone so we could press through this virus,” Nelson said. “Although we are not fully out of it, we are still grateful for your partnership and the work you have done and your ability to help us learn from you.”

The PCK is the based in South Korea and has the second largest membership of any Presbyterian denomination in the world. It holds membership in both the World Communion of Reformed Churches as well as the World Council of Churches.

“We have always known of the way by which South Korea has been about the business of technology,” Nelson said. “We also know of the work you have done with regards to the ongoing progressive work in furthering the way we are able to move a lot faster with knowledge and understanding.”

Nelson alluded to the work currently under way for the 224th General Assembly of the PC(USA), which will take place completely online.

“Moving toward our own General Assembly, we have been feverishly struggling with what it really means to do a virtual gathering. It is an exciting time for us and yet it can be frightening some days,” Nelson said. “We know God is in the midst of all of it and Jesus Christ has already made the way and the Holy Spirit will guide us through all we are doing.”

Nelson had planned to visit South Korea again this fall but had to cancel the visit as a result of the pandemic.

“To whom much is given, much has been required. We have been given much in PC(USA) and believe that much is still required from us to lead the way to walk by faith and not by sight and remember always that everything we need has already been given by God,” he concluded. “It is just our responsibility to use that which God has given us.”

Rev. Luke Choi, manager for Korean-speaking Councils Support with OGA, says the Stated Clerk’s message was expected to be well-received.

“To me, what’s so clearly evident through his message is not only the respect and love our church has for our Korean partners but also his personal fondness and genuine longing to strengthen our ecumenical relationship with them,” he said. “The Clerk already has made a strong impression among our own Korean-American constituents by firmly supporting the Asian community against any unwarranted bias in this time of pandemic; hence his lifting up of Korea as one of the visionaries and world leaders in such a time will only bring more uniting force under his leadership in our own church as well as the church worldwide.”

The PCK has more than 2.8 million members and 8,200 congregations.