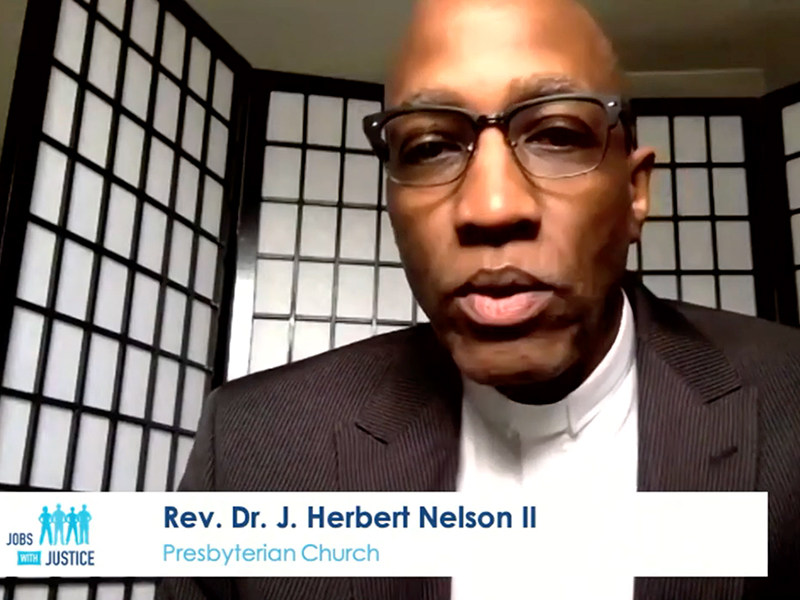 J. Herbert Nelson, II, speaks during an online broadcast of the Jobs With Justice awards program.

The Reverend Dr. J. Herbert Nelson, II, Stated Clerk of the General Assembly of the Presbyterian Church (U.S.A.), was honored Wednesday night by Jobs With Justice, a union rights organization, for his social justice work over the years.

“I met Dr. Nelson when I was 16 years old while participating in my first labor struggle. Black workers at a K-Mart store were asking for help in what was considered racial discrimination. As a result, more than 550 distribution workers negotiated and won,” Smiley said. “That was when I learned that unjust laws were meant to be broken, equality was worth the sacrifice, and democracy was worth the fight.”

In accepting the award, Nelson said one of the things people are facing in this nation today is a “great deal of lament.”

“We are seeing massive changes taking place in the world order, holding individuals at borders to ensure that the population doesn’t expand too much for those with privilege. We find ourselves turning local jails into places of long-term incarceration and struggling to end the cash bail system where we don’t have individuals in downtown jails overcrowded for misdemeanor crimes,” he said. “The system speaks of a speedy trial and yet, at the same time, it is not speedy nor is it fair. We find this as nothing more than a money mill within the U.S.”

Nelson has advocated ending the cash bail system across the country and led marches in downtown St. Louis during the 223rd General Assembly (2018) and another march in Louisville, Kentucky, last year. He has also met with numerous city leaders, including those in New York City, on efforts to improve opportunities for those who cannot afford bail.

“We find ourselves wasting the souls of individuals who could possibly make a difference, individuals who could be responsible fathers and mothers, responsible children, who, in their daily lives, could make a significant difference,” Nelson said. “This has been one chapter in U.S. history that has never changed. I think the movement of today is another iteration of trying to move beyond this saddled way of thinking that you have to have some who are poor at the bottom, and those who are at the top with the greatest expressions of power, dominance and control.”

Nelson said a great deal of his more than 30 years of ministry has always been the understanding that there will always be a fight for justice.

“Euro-Americans are finding themselves realizing this is a changing nation and they cannot continue to control it. This is why neighbors are being locked up at the border. This why we see this kind of herky-jerky immigration process,” he said. “We have not learned yet how to engage the otherness of the other. That is a part of our history, in our DNA to separate and segregate and leave others behind.”

Nelson said too many people have not had opportunity because of the unbalanced way in which people are governed.

“How do we become people we ought to be and see hope through the lens of embracing everyone and opening doors for individuals?” he asked. “That’s the fundamental challenge that we have to deal with in this nation. We will then be able to see all people receive an education, persons not stopped on the street for being intoxicated and serving five years in jail and not coming to trial. We will not see a group of people at the bottom, who on the day they are born, are being told they will not make it.”

The Reverend James Orange was a pastor and leading activist in the civil rights movement in America. He served as an assistant to the Reverend Dr. Martin Luther King Jr.