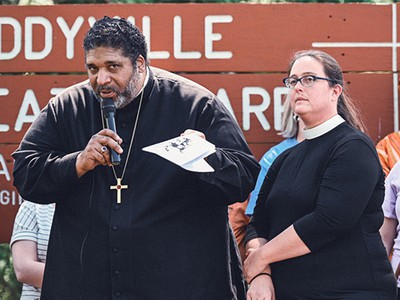 As plans were being made for the 224th General Assembly in Baltimore, a synergy was forming with another event down the interstate in Washington D.C.: The Poor People’s Campaign: A National Call for Moral Revival was preparing to hold its Mass Poor People's Assembly and Moral March on Washington during the GA’s opening days, giving folks a chance to shuttle down to the like-minded event.

Then the pandemic hit.

Along with General Assembly, the COVID-19 crisis has also forced the Poor People’s Campaign event online. That actually makes it even more accessible to Presbyterians, who will see church leadership involved in the assembly. The event is now just a few clicks away, and taking place on Saturday, June 20, which will not be an active day for the online General Assembly.

“Presbyterians are engaged in the Poor People’s Campaign and the synergy it is creating,” said the Rev. Jimmie Hawkins, director of the PC(USA) Office of Public Witness (OPW) in Washington D.C. “The OPW is playing a role in the roll-out to the June 20th global event, attending the Wednesday conversation and urging a Presbyterian presence. The goals of the campaign match up well with the social witness policy of the PC(USA). For decades we have been calling for an end to systemic racism and provided resources for congregations to combat its impact. Our denomination has ongoing policy on climate change, wage inequity, voting rights and the elimination of poverty.”

“The U.S. has always been a divided country when it comes to poverty and wealth,” says the Rev. Dr. J. Herbert Nelson II, Stated Clerk of the General Assembly of the Presbyterian Church (U.S.A.), who is expected to participate in the June 20 event. “Over the years, there have been efforts by pastors and community leaders to press toward a society for all individuals with equal opportunities. Rev. Barber has now picked up this mantle to lead in this present day, along with other individuals who have given their lives to this cause. This has been an ongoing desire and commitment for Reverend Barber since the beginning of his ministry and I am happy to join them at this time.”

The two-hour June 20 event will be presented at 10 a.m. and 6 p.m. Eastern Time, and again at 6 p.m. June 21. People can sign up at the event's registration page. It is purported to be “the largest digital and social media gathering of poor and low-wealth people, moral and religious leaders, advocates, and people of conscience in this nation’s history,” according to the PPC website.

There have been and will continue to be prelude events leading up to the march that people can keep track of on the campaign’s Facebook page. State campaign chapters can also be found through the campaign website. There was supposed to be an MSNBC special with anchor Joy Reid, Barber, and Theoharis on May 31, but it was postponed and will be rescheduled due to ongoing coverage of protests last weekend of the deaths of George Floyd in Minneapolis and Breonna Taylor in Louisville, Kentucky at the hands of police officers.

To organizers, the issues raised by those incidents, as well as the COVID-19 pandemic, lend increased urgency to the moment and the role the Poor People’s Campaign has to play organizing more than 140 million poor and low-income people in the United States.

“This is an important justice advocacy movement which is generating energy and is a source of motivation for people around the world,” Hawkins said. “It is a call for Presbyterians and others to lift their prophetic voices seeking to be hearers and doers of God’s will to ensure that the needs of desperate people are met, a chance for us to ‘do justice, love kindness and walk humbly with your God,’” he added, quoting Micah 6:8.

Nelson said, “I believe we have the power to eradicate poverty in the U.S. if we choose to do so. I believe we can eradicate some of the ills we face in humankind if we give individuals a chance to earn a living and support those that come behind them. This is all we ask in the campaign, to treat poor people as decent human beings and give them the opportunity to experience something far beyond what they are experiencing now.”