Commissioners and advisory delegates get down to business 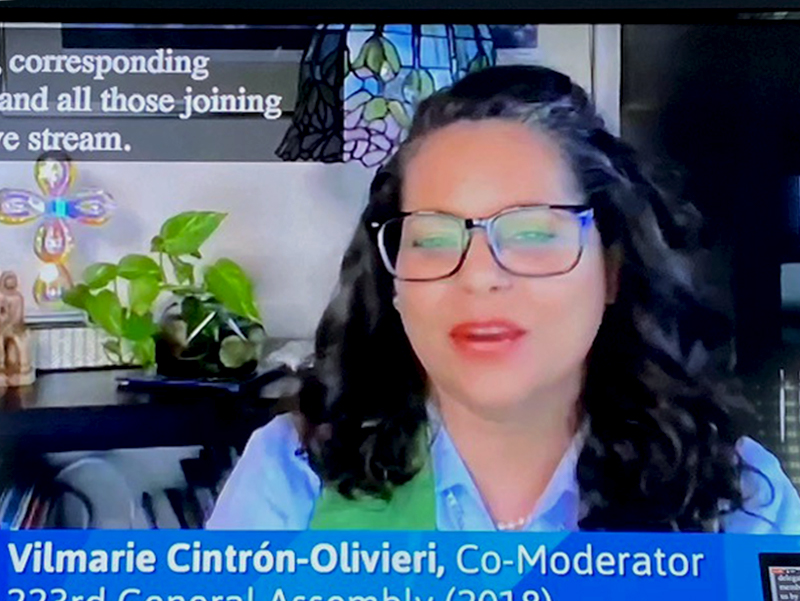 Vilmarie Cintrón-Olivieri moderates part of the first plenary of GA224.

More than 400 commissioners, over 180 advisory delegates, and hundreds of staff, churches, and spectators tuned in to take part in the first-ever, fully online 224th General Assembly (2020) of the Presbyterian Church (U.S.A.) on Friday night. Initially slated for two hours of business followed by the Co-Moderators’ election, the session lasted nearly four-and-a-half hours, prompting the rescheduling of the election.

With a technical crew and staff scattered across several conference rooms at the Presbyterian Center, the online assembly worked well, with only a few minor pauses and a few muted microphones.

The assembly opened with a series of music performances from Presbyterian churches around the country, followed by recognition of Indigenous lands.

The Reverend Dr. J. Herbert Nelson, II, opened the plenary by recognizing the various challenges facing the U.S. and the world, including the COVID-19 pandemic and racial justice issues.

“This is a time of unrest in our streets. The Breonna Taylor and George Floyd families must be remembered and recognized for how they found themselves at the center of this movement. We also have to remember Ahmaud Arbery and the loss of his life,” Nelson said. “We must get off of our blessed assurance and do what God is calling us to do.”

Nelson urged participants not to mourn the inability to gather in person, but to embrace the moment.

“Don’t be sorrowful about sitting in front of a computer. God has chosen the PC(USA) not because we are deserving of it, but because God chose us by grace,” he said.

The assembly was scheduled to meet in Baltimore, but the COVID-19 pandemic forced the Office of the General Assembly to reconsider options since there were no legal provisions to cancel the gathering altogether.

After receiving greetings from the Presbytery of Baltimore, the Co-Moderators’ report, and a quick test of voting tools, the assembly jumped into the business of the night.

The Assembly Committee on Business Referral brought a series of motions to allow the assembly to legally meet, defer matters to the 225th General Assembly (2022), and recognize a few concerns regarding social justice issues.

“Neither the "Book of Order" nor the Standing Rules authorize meetings to be held electronically. The closest we can get is to authorize what we are doing,” said Theresa Denton, committee moderator. “The 225th General Assembly (2022) will need to ratify what we do this year.” 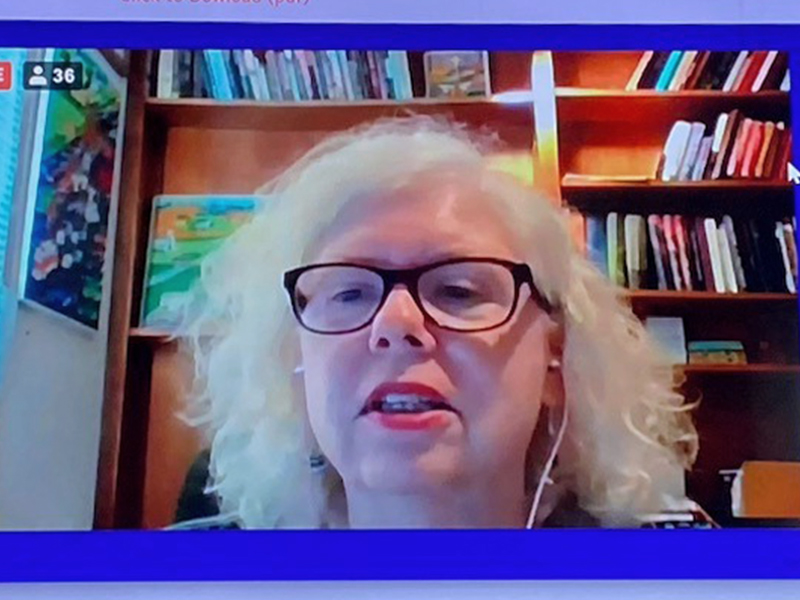 After the motion passed, Barbara Gaddis, moderator of the Committee on the Office of the General Assembly (COGA), told commissioners that all options were considered for conducting an assembly gathering.

“General Assembly is required to meet every two years and we needed to gather in 2020. Finding a time later in the year to meet would be difficult,” she said. “We didn’t know what venue would be available later in the year or even if we could find one. Meeting online was the only option.”

The Assembly Committee on Business Referral and COGA had recommended the assembly focus on critical business only during this assembly, but some commissioners felt it was critical to take up some issues that were not on the agenda.

“We need to amend the resolution to form an assembly-wide committee on how the PC(USA) will address social injustice,” said Commissioner John Graham of the Presbytery of Donegal. “I feel we should carve out time to develop plans to deal with critical social justice issues and I don’t feel we can wait to the next General Assembly to get the ball rolling.”

Corresponding Member Kerri Allen of the Presbytery of Chicago says she agreed with the heart and sentiment but felt this was not the answer.

“People are engaged in doing that work now and some of those cannot participate in this assembly in ways they would under normal circumstances. There are limitations to this type of meeting,” she said. “Maybe it would be more appropriate to hear from those voices directly who can’t participate at this time. We can continue being the Church of Jesus Christ, knowing these issues will be here at the next assembly.”

There was some lengthy discussion on whether to seat the Reverend Dr. Jana Childers with the University of Redlands Graduate School of Theology as a corresponding member of General Assembly. The university took over the San Francisco Theological Seminary last year and there has been debate over whether it is recognized by the PC(USA).

“The issue of seating at this particular time relates directly to affiliation. We are aware that the university owns what used to be San Francisco Theological Seminary, so the PC(USA) no longer has a seminary there,” said Nelson. “Seating on the floor at General Assembly requires membership.”