The first plenary of the historic 224th General Assembly (2020) of the Presbyterian Church (U.S.A.) is in the books and organizers are overall pleased with how the online process has worked so far.

From a technical aspect, all systems worked as expected and the overall performance was “fantastic,” according to Vicente Guna, manager of technologies for the Office of the General Assembly. There are a few coordination issues they will be improving for the next plenary sessions, but no major changes are planned for the systems.

“What we found is something we were expecting: commissioners feeling a lack of visibility over our processes. For instance, how many people are in the queue before them? On a physical setting, they would see the people physically waiting behind the mics. We are working on a solution, so they know at every point how many people are standing before them,” he said. “Also, the lack of parliamentarians sitting at those microphones on this setting has eliminated their assistance to commissioners before making a motion, so we found more issues when it comes to motions processed incorrectly. We are also modifying our processes to allow parliamentarians to have a more proactive role in helping commissioners process their motions correctly, so we minimize confusion and mistakes.”

Kerry Rice, deputy stated clerk with the Office of the General Assembly, says staff are already looking at ways to compensate for the lack of visual cues at the online assembly.

“We used to be able to look around the room and see the colored paddles. What new visual cues can we use? We’ve talked about that amongst the technical team,” he said. “We will also be looking at how we can tackle it for future assemblies.” 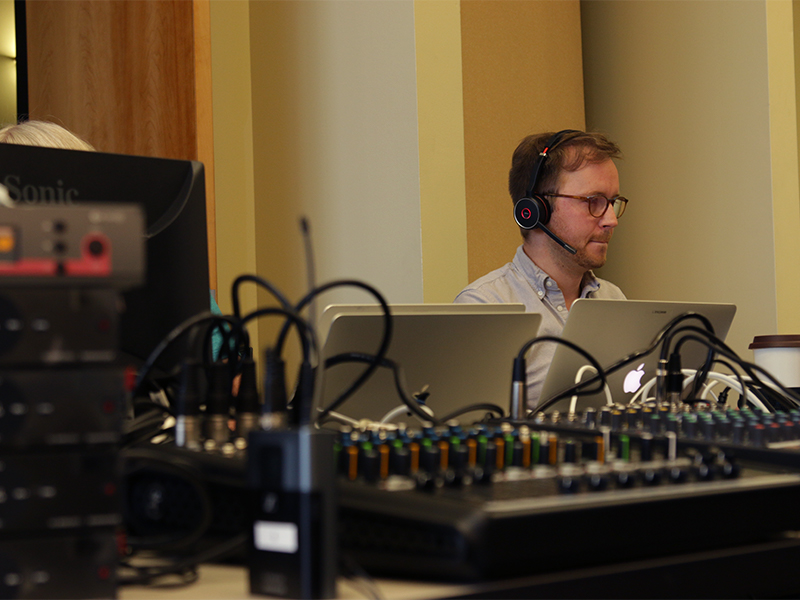 In a virtual meeting after the first plenary, members of the Committee on the Office of the General Assembly (COGA) assessed the process, complementing all of the work behind the scenes to make sure the online assembly is working.

Guna says the experience of a well-seasoned production and tech team and thorough training made the difference.

“We put many hours of training and communications to participants, so they were ready when the first plenary started. The helpdesk, volunteers and staff did a tremendous job in helping and accompanying participants in their struggles,” he said. “We deployed a cloud-based infrastructure that allowed us to staff this helpdesk with people scattered all over the country, serving people all over the U.S.A. and also in other countries.”

From a production perspective, we had a nearly flawless first weekend,” said Nathan Young, assembly producer. “I am so blessed to work with this awesome team. They truly make it happen.”

“One of the things they all mentioned was a feeling of disconnection and isolation from the assembly as a whole,” Rice said. “Part of that is not having people next to or behind them to make a motion for them. We will be encouraging mid councils to connect with their advisory delegates.”

The Reverend Dr. J. Herbert Nelson, II, Stated Clerk of the General Assembly of the PC(USA), was pleased with the first weekend’s results. He says what is learned at this assembly will provide the foundation for future church gatherings.

“This is my first time seeing anything like this and there are no guarantees that we might not have glitches,” said Nelson. “This is a totally new experience, something that is being built and is not available anywhere else that we are aware of. Even as we move forward, we will have to re-think in totally different ways how to accommodate the very system we are now in.”

The online General Assembly was pulled together in less than three months after the COVID-19 pandemic began. The original hosting site in Baltimore was cancelled because conference and hotel space were converted to assist with patients.

The assembly re-opens on Friday, June 26, with opening worship. It concludes the following day. Click here for more information about the 224th General Assembly (2020) and all scheduled events.

Commissioners take part in a prayer for the new Co-Moderators for the 224th General Assembly (2020). Photo by David Staniunas.