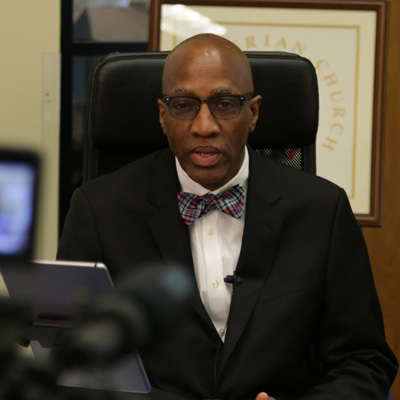 J. Herbert Nelson awaits the vote to approve a second term as Stated Clerk of the General Assembly of the PC(USA). Photo by Randy Hobson.

The Rev. Dr. J. Herbert Nelson, II was re-elected as Stated Clerk of the Presbyterian Church (U.S.A.) Saturday morning by 94 percent of the commissioners to the 224th General Assembly.

Immediately after the election, in which 454 commissioners voted yes, Nelson spoke to churches and the moment the church as a whole finds itself in.

“Having the opportunity to live as a pastor the last 30-plus years, I’m still a pastor, in many different ways,” Nelson said. “I give thanks to folks who are out here struggling and pressing hard to get through these tough times that we find ourselves in, and to be open to new possibilities of ministry.

“I have over and over again said how grateful I was for these television preachers that we said we would never become television evangelists. Yet, as soon as the pandemic hit, every preacher turned into a television evangelist in one week,” Nelson said. “That’s the kind of energy, intelligence, imagination and love that we have to have for the gospel — the willingness to know that we’re going to hit some walls, we’re going to have some tough times. But digging and giving people a sense of what the gospel is … may or may not in that moment deal with their potential reality of pain or hurt or feeling lost. But if we keep pushing, somewhere along the line there is a God who is far greater than any of us, and there is a savior who reminded us that you can go to the poor and the broken and the lost and the widow and all of the other folks who seem to be left out and yet make a difference. And I’m convinced that is where the church has to be.”

“We cannot be locked inside of our buildings, and I believe even through this virus we have come to find out that the building is not essential to the work we have to do,” he said. “It is good to have one, but it is not essential to share the love of Jesus Christ and our heart for Christ in the work that we are being called to do.” 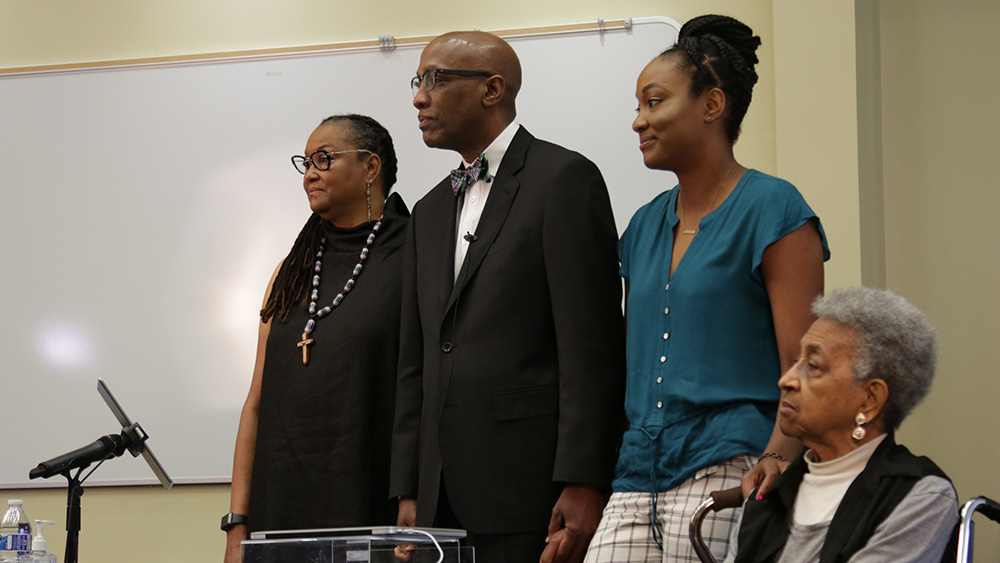 As Nelson spoke, he was flanked by his wife, the Rev. Gail Porter Nelson; daughter Alycia Yvette Nelson; and his mother-in-law Alice Porter in the Presbyterian Center in Louisville, which was the nerve center for the historic General Assembly. The gathering had originally been planned for Baltimore, but it was converted to a shortened, online assembly due to the COVID-19 pandemic.

Nelson is a third-generation Presbyterian pastor who led churches in Tennessee and North Carolina before becoming director of the Presbyterian Church (U.S.A.)’s Office of Public Witness in Washington, D.C.

Nelson stood unopposed for his second four-year term as Stated Clerk. Wilson Kennedy, chair of the Stated Clerk Nominating Committee, said the committee received one other inquiry about the position, but that person chose not to pursue it.

Putting forth Nelson’s name for nomination, Kennedy said, “J. Herbert’s call to this office is undeniable.

“J. Herbert serves with a scholar’s precision and nimbleness, a pastor’s heart, an advocate’s fire for justice, and an executive’s vision. Our committee was convinced that his unique set of skills were the right combination of scholastic pedigree and professional experience needed to provide strategic and prophetic leadership at this moment in our church’s history.”

Ruling Elder Elona Street-Stewart, who was elected last week to be co-moderator of the 224th General Assembly along with the Rev. Gregory Bentley, presided over the election and installation process, which included question-and-answer sessions for both the nominating committee and the candidate. During that time Kennedy said the committee was satisfied Nelson sought to hear young voices in the church at all levels, and Nelson affirmed his desire to address climate justice, support small churches, and work to remove barriers to marginalized communities becoming fully involved in the church.

But he acknowledged there are currently barriers to full inclusion in the church for these communities, and that those need to be addressed. Those statements were later echoed as he reflected on how the impact of the COVID-19 crisis and subsequent uprising over racial injustice have in a few months impacted the church and perceptions of what church is.

“As a matter of fact, I don’t remember Jesus having a church house,” Nelson continued in his remarks after election. “I think every one he went into, he got thrown out of. There’s something about that kind of gospel that sticks to the core of who we are and sticks to the minds and lives of other people to do the transformative work that our Lord God has called us to do.

“And I believe we are not dying,” Nelson said. “We are reforming and becoming the church that God wants us to be.”

“Every now and then, you think about that Kool-Aid that does not taste good until you stir it up a little bit,” the Stated Clerk said. “We’re being stirred up now by a spirit that calls us to be the church we have to be in the 21st century, and until the stirring is over, it will not have what is needed to taste as good as it should.”

“But it will taste good,” he said. “Just keep stirring, find the right answer, and keep walking by faith.”