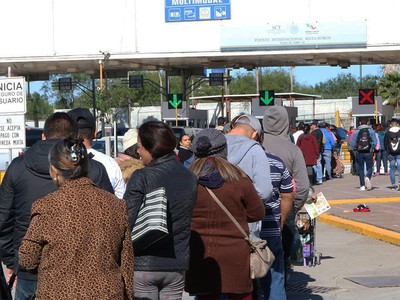 Hundreds of people wait to cross the border bridge from Mexico into Brownsville, Texas. —Photo by Rick Jones

A U.S. District Court’s decision to block plans to remove protections for migrants coming to this country seeking asylum has come as good news for those working in immigration advocacy for the Office of the General Assembly of the Presbyterian Church (U.S.A.).

Last Friday, the U.S. District Court for the Northern District of California issued a preliminary injunction preventing the Trump administration from removing protections for those coming into the U.S. to escape torture and persecution. The administration’s new rule was set to take to take effect on Monday.

Chad Wolf, acting secretary of the Department of Homeland Security who announced his resignation Monday, had signed the rule. Like previous court rulings, the U.S. District Court agreed that Wolf did not have the legal authority to act.

“In 1984, the General Assembly of the PC(USA) called on the attorney general of the United States to take measures to ensure the safety and protection of asylum seekers as to ensure free and fair access to courts and other legal procedures that allow for proper determination of refugee status,” said Amanda Craft, manager of Immigration Advocacy for OGA. “As in 1984, Presbyterians along the U.S. southern border from southern California to southern Texas are working to support asylum seekers. Presbyterians around the country from New Hampshire to Kentucky to the Northwest are ministering to and accompanying asylum seekers. When our government makes decisions to limit protections or legal access, we must speak out as we have done in the past.”

Craft says the court decision means asylum seekers can breathe easier, but it does not mean that the work is done.

“We must continue to call out when the powerful abuse their power. It is God’s will that all people have a safe, dignified place to live,” she said. “We must be part of the movement that holds lawmakers and those who implement laws accountable.”

“The rule changes that were scheduled to take effect this week would have taken an already difficult standard and complicated process and made it all the more difficult and complicated,” said Teresa Waggener, OGA’s manager of Immigration Issues. “Asylum is a part of immigration law to protect those who have been made vulnerable, so vulnerable that they have left their homelands to find safety in new nations.”

Waggener says the U.S. should respond to such “brave acts under desperate circumstances” with compassion and clarity — not difficulty and complications.