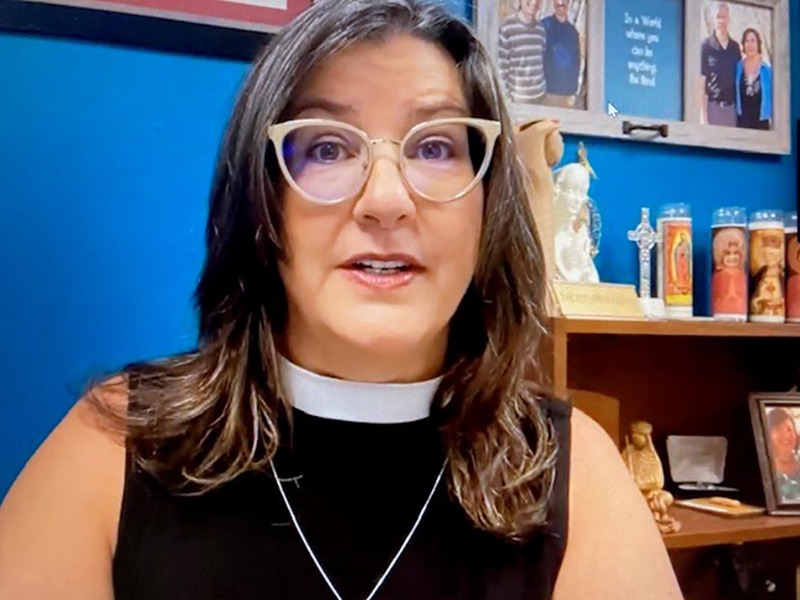 The 2021 Polity, Benefits, and Mission Conference kicked off virtually on Thursday with Bible study and a conversation around the 225th General Assembly of the Presbyterian Church (U.S.A.). This week’s online gathering brings together mid council leaders for two days of study, workshops and conversation on several topics, including the Matthew 25 initiative and the Office of the General Assembly’s strategic values, goals and opportunities, as well as benefits updates.

The day began with Bible study led by the Rev. Marci Auld Glass, head pastor of Calvary Presbyterian Church in San Francisco, on the theme From Lament to Hope, which will be carried to the 225th General Assembly next year. The conference, formerly known as the Mid Council Leaders Gathering, like last year, is being held virtually due to the pandemic.

“Twenty months in a pandemic and we lament lives lost and the rhythms we have lost. I lament the realization that too many of our neighbors don’t care about everyone’s health or freedoms,” she said. “We can no longer pretend we are a nation that has compassion in our DNA. I lament this loss. Communities of color knew of this civic selfishness long before many of us.”

Glass told the group that many churches are lamenting the loss of what church used to be, adding that many are “stressed to the breaking point” over what the future holds. Moving forward, Glass urged the group to turn to hope.

“If we want to see hope, we need to build houses, plant gardens,” she said. “Hope calls us to build new structures, plant new seeds and trust that we will see that the steadfast love of the Lord never ceases.”

valerie izumi, OGA’s manager of GA nominations, said one of the most important parts will be the selection and appointment of Assembly committee moderators and vice moderators.

“All commissioners to the 225th General Assembly will have an opportunity to be considered for appointment to Assembly committee leadership by completing a self-nomination form,” izumi said. “Please encourage commissioners — especially Ruling Elders, people of color and those under 45 years old — to consider this opportunity to share their leadership gifts in this way.”

The Rev. Gregory Bentley and Ruling Elder Elona Street-Stewart, co-moderators of the 224th General Assembly, will appoint leadership for Assembly committees on Feb. 4.

izumi said the Office of the General Assembly, in conjunction with planners for the Presbyterian Youth Triennium and colleagues from Legal and Risk Management, are assembling a panel of people with expertise in public health and related areas who can advise on the best practices to follow.

“One COVID-related decision that has already been made is that the Assembly budget will cover the cost of single rooms for all commissioners and advisory delegates,” izumi said. “Policies about vaccination requirements, testing, masking, etc., will be announced and updated based on scientific information and advice from professionals and in a timely manner.”

Kerry Rice, deputy stated clerk for the Office of the General Assembly, also briefed mid council leaders on plans for new meeting space at the Presbyterian Center. Work is currently underway to reconfigure the first floor at the Louisville office to support the hybrid gathering next June.

“Though the genesis of the project was hosting this Assembly, it became clear quite quickly that the renovation was necessary in the age of COVID for a number of other reasons as well,” he said. “Prior to renovation, we had one large meeting room that could accommodate 40 to 60 people. Now we will have an additional three large conference rooms that can hold up to 80 each and are large enough to accommodate social distancing as necessary.”

In addition to the renovated meeting space, OGA leaders announced there would not be an exhibition hall at the Assembly next year.

“In addition to the lack of space for that, it would be a long period for exhibitors to be there to greet commissioners and advisory delegates who have little time to visit with them,” said Tricia Dykers-Koenig, assistant director for Mid Council Ministries. “Instead, vendors and organizations that meet certain criteria will be invited to submit their information to be included in an online directory that will be available on the GA225 website. In general, groups eligible for booths in the past may request to be included here.”

Mid council leaders were given an opportunity to ask questions during the first session on Thursday. Additional time to discuss GA225 is planned for Friday afternoon.

Sponsors for the Polity, Benefits, and Mission Conference include the Board of Pensions, Office of the General Assembly and the Presbyterian Mission Agency. It is designed specifically for administrative, ecclesial and programmatic leaders of mid councils.