The Presbytery of the Northwest Coast recently voted overwhelmingly to approve an overture for 225th General Assembly that addresses an act of historic injustice in Alaska: the 1963 closing of Memorial Presbyterian Church in Juneau. 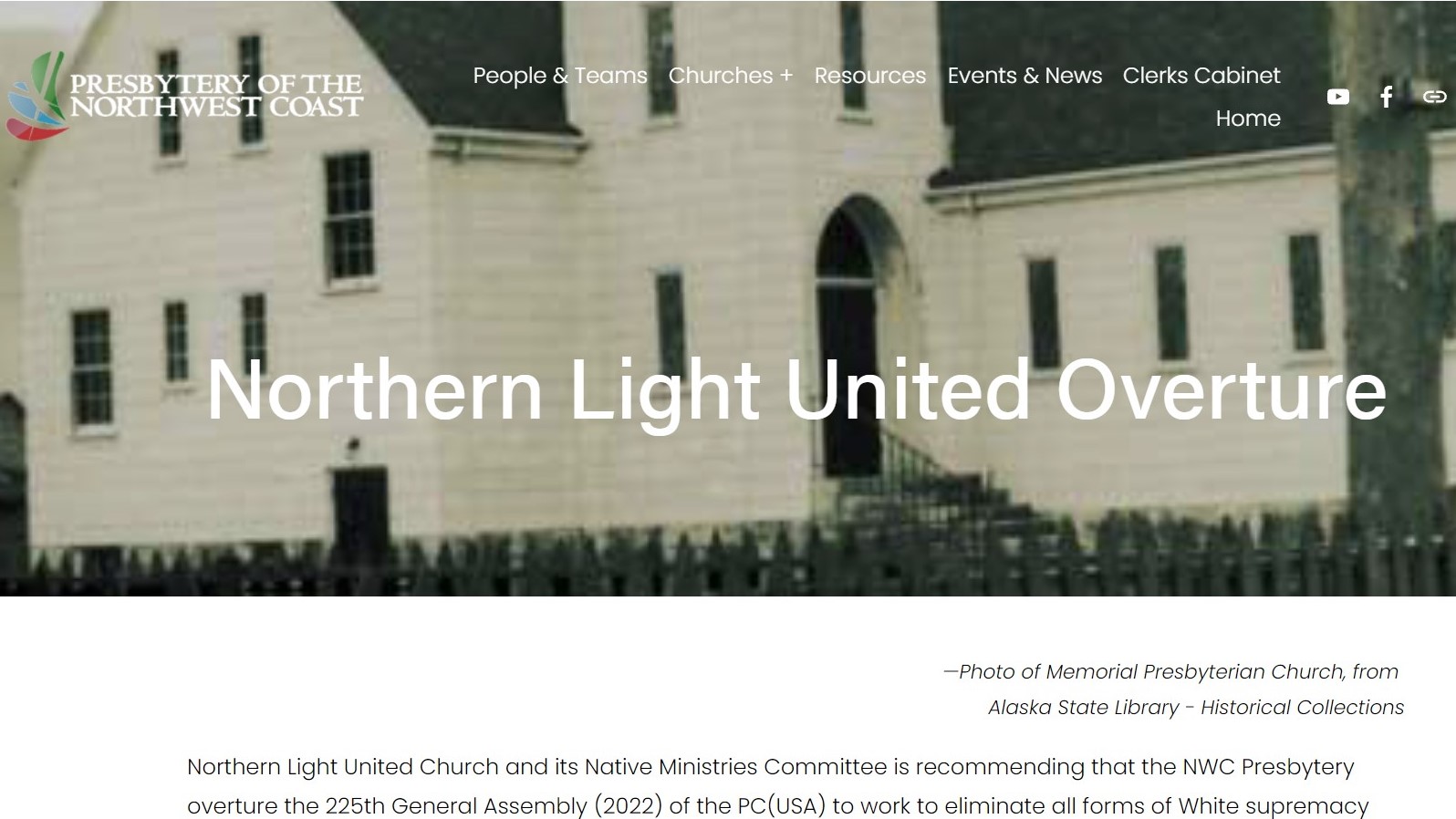 Memorial Presbyterian Church had a large Tlingit membership. At points in its history locals called it the Juneau Indian Village Church or the Tlingit Church.

As a part of “meaningfully address[ing] the wounds inflicted on Alaska Natives,” the overture directs a number of specific steps, including “posthumous apology, acknowledgement, and confession in public ceremony, attended by national and regional church officials, to the late Rev. Dr. Soboleff, Sr.”

The full overture, which needs concurrence from other presbyteries before being submitted to General Assembly 225, can be read here. The vote occurred during the presbytery’s 2021 annual meeting.

The overture references General Assembly 223’s repudiation of the Doctrine of Discovery and its call to “demonstrate repentance through meaningful reparative action.” In this case, that includes directing $300,000 of funds from the Presbyterian Mission Agency to the Sealaska Heritage Institute for Indigenous language revitalization efforts and to the Presbyterian Foundation’s Native American Church Property Fund.

The request for reparations by the General Assembly is preceded by reparations already approved by Juneau’s Northern Light United Church (found in the resolution attached to the overture) and reparations the Presbytery of the Northwest Coast approved when the overture was submitted to it by that congregation.

The presbytery vote came after a month of intentional study and reflection, work that built off community conversations, research and soul-searching by Northern Light United Church.

That congregation’s Native Ministries Committee took the lead in drafting the overture. The church’s council then unanimously approved the overture and submitted it to the presbytery, but only after the congregation’s membership had overwhelmingly adopted a resolution of reparations to which Northern Light has committed itself.

Prior to the presbytery vote, two members of the Northern Light Native Ministries Committee spoke in favor of the overture.

Maxine Richert, who is Tlingit and Athabaskan, said she was 15 years old when Memorial Presbyterian Church closed. The Juneau of her childhood was a place where racism toward Native Alaskans was common and often overt. “There were signs in storefronts that read, ‘No Dogs and No Natives,’” Richert said.

She spoke about her family’s connection to Memorial Presbyterian Church, the lasting pain the closure caused the wider Native community, and Soboleff’s importance throughout Alaska. The overture’s rationale states that Soboleff’s ministry traveled over the airwaves, “allowing Natives and non-Natives throughout Southeast Alaska and as far away as the Yukon Territory to hear his Sunday sermon in Tlingit and English.”

“I read the Northern Light records and didn’t find a single thing about recognizing Memorial’s loss or its pain,” Munson said.

She also said that pain caused by the closure had stayed with Soboleff for the rest of his life.

The Northern Light committee work began and often returned to conversations with Native Alaskans in the congregation and the surrounding community of Juneau.

“We decided we must listen first to those most affected,” Munson said. “When we failed [to do that] we were reminded.”

“But words are not enough,” she added. “Reparations and commitment to long term action are required….Victims can’t be responsible for remedies.” 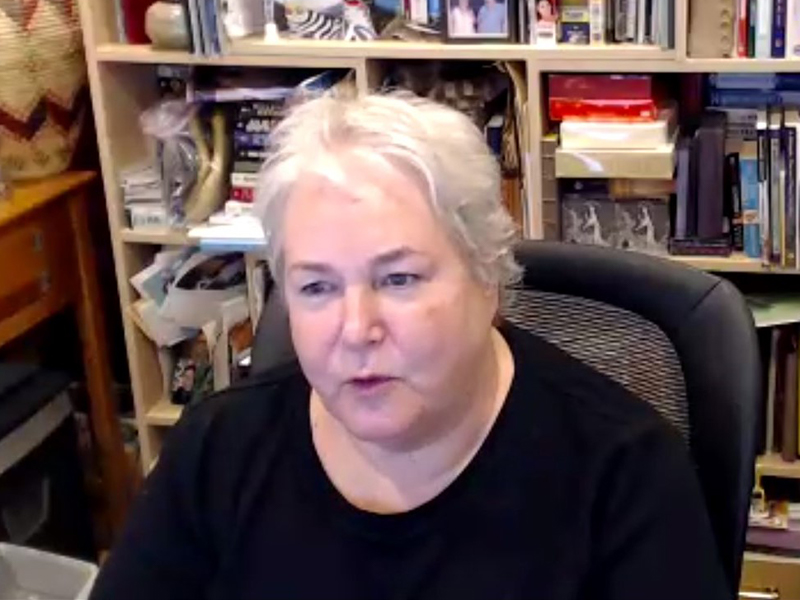 Munson thanked the pastor of Northern Light United Church, the Rev. Faith McClellan, and Presbytery of the Northwest Coast Executive Presbyter, Dr. Corey Schlosser-Hall, for working closely with the congregation on the idea of an overture.

In a follow-up email, Schlosser-Hall emphasized that the Tlingit, intercultural Memorial Presbyterian Church wasn’t just closed in 1963. It was merged into what was at the time a majority white congregation, Northern Light Presbyterian Church.

“We can't discern from any of the records that the other way [merging Northern Light into Memorial] was ever considered or discussed,” Rev. Schlosser-Hall wrote.

“The lack of consultation with Memorial, the lack of evidence of anything ‘welcoming’ to the Memorial Church members, not even thinking about integrating the leadership (including Rev. Soboleff as pastor of the new "integrated" church) … was racist.

“Racism and the other -isms get perpetuated often times unconsciously and unintentionally, but the end effect is still racist. Sin is not something that is only ‘intentional.’” 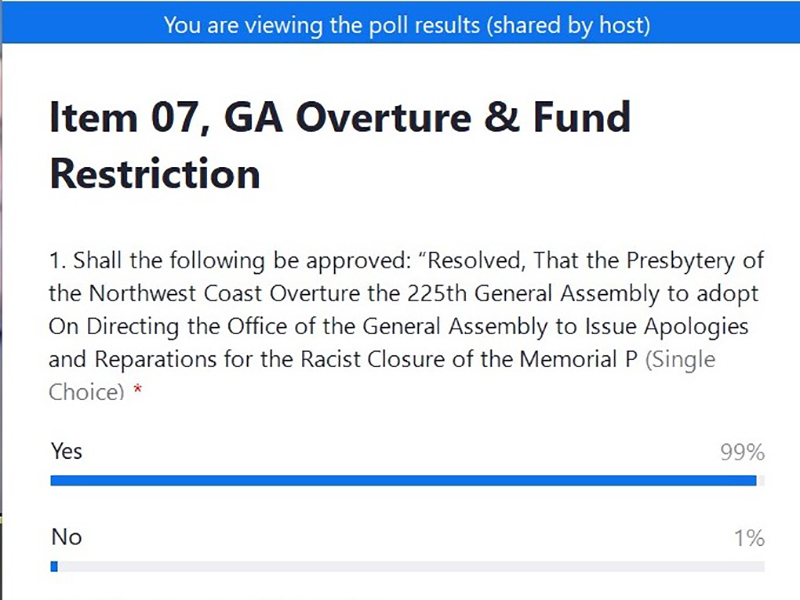 Before the vote, the Rev. Matt Paul, Moderator of the Presbytery of the Northwest Coast, encouraged the more than 100 Zoom meeting attendees to ask questions and share comments for or against the overture. Speakers voiced overwhelming support, and only two lines of text that had been inadvertently left in when the overture was sent to presbytery were edited out before the vote was taken.

The Rev. Greg Ellis, pastor at Cordata Presbyterian Church in Bellingham, Washington, spoke about having early misgivings about the overture before coming around to supporting it. Ellis is a member of the presbytery’s executive board and part of a presbytery task force that produced educational materials about the overture (available at the bottom of the overture page).

“For those of us who have invested our life in, and received life from, the church,” he said, “the idea that the church is wrong or sinful is a hard thing to take in at first.”

Several presbytery members said that the overture had been discussed already at their own congregations, and that their churches may look to take their own steps toward restorative justice for Native members of their communities.

The overture, which the Rev. Dean Strong, Stated Clerk & Treasurer of the Presbytery of the Northwest Coast, announced had passed following a Zoom vote, was already inspiring conversations and action across the region.