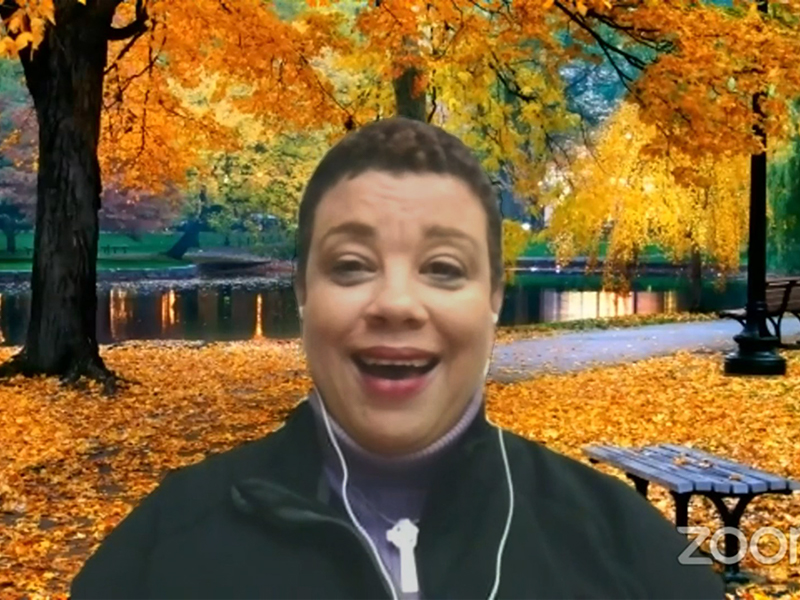 The Rev. Dr. Lisa Allen-McLaurin discusses decolonizing worship with the Co-Moderators of the 224th General Assembly during "Good Medicine" on November 10, 2021.

The Rev. Dr. Lisa Allen-McLaurin discusses decolonizing worship with the Co-Moderators of the 224th General Assembly during "Good Medicine" on November 10, 2021.

Decolonizing worship means recovering practices and traditions of the Black church that have been “changed, altered, sometimes thrown away” for hundreds of years, the Rev. Dr. Lisa Allen-McLaurin said during the November broadcast of “Good Medicine,” hosted by the Rev. Gregory Bentley and Ruling Elder Elona Street-Stewart, Co-Moderators of the 224th General Assembly (2020).

Allen-McLaurin is the Helmar Emil Nielsen Professor of Church Music and Worship and degree coordinator for the MA in liturgical arts and culture at the Interdenominational Theological Center in Atlanta. She is an ordained elder in the Christian Methodist Episcopal Church and coordinator for practical ministries in the Sixth Episcopal District. She holds a Ph.D. from the University of Southern Mississippi and an M.Div. from the Candler School of Theology at Emory University.

The conversation began with Allen-McLaurin reflecting on how the pandemic has challenged clergy and parishioners alike to think about new ways to worship, such as committing to more intentional daily devotions or forming small worship groups to help people feel connected during such an isolating time. She said the pandemic has also taught us that “worship is not limited to four walls.”

The question is, “Do you have to be in a church building to worship? And if you do, are you worshiping the edifice?” she said. “Is that necessary to make you feel like you are in worship? If it is, then that’s a limitation we’re placing on God because worship happens everywhere.

“Worship is wherever we find ourselves. We can’t limit worship to a building or a style. The church has got to wake up to that and realize when we put limits on what’s ‘right’ for worship, we’re pushing people away: ‘We want you to come, but we want you to come this way.’ We’re keeping people out of the kin-dom,” said Allen-McLaurin.

The speakers shared a clip from the Academy Award-winning film “12 Years a Slave.” The scene depicts the main character, Solomon Northup, among a group of enslaved people gathered outside and spontaneously singing “Roll, Jordan, Roll.”

“What I love about that clip is that it shows a more authentic presentation of a spiritual than what we normally hear,” said Allen-McLaurin. “We’ve got to understand the ways some of what we call ‘Indigenous’ worship practices were seen as not acceptable for the status quo … for Euro or Anglo spaces, and sometimes Black spaces, too, because our ancestors took their cues from the dominant majority to be accepted, so we would not be persecuted any more than we already were.”

Spirituals “grew up out of experiences, like what you saw in the clip,” she said. “No one was sitting composing an eight-part harmony that we have now. It grew out of the experiences, the emotions, the lived realities of the ancestors. So, when Fisk and other schools began to take these spirituals and go on tour, they presented them in the Euro, Anglo, Western choral literature versions because they were more palatable. But the reality is that those spirituals came up out of some horrific experiences, and we need to hear that. That was how we survived.”

Enslaved people were required to attend Sunday services but “we left the slave owner’s church and went out in the woods, the forest, the brush arbors, and we had those authentic worship experiences, where we could pray to the God of our ancestors, where we could sing the chants, the melodies we remembered, because so much had been taken from us,” she said, adding that decolonizing worship means recovering those practices and traditions, including acknowledging that spirituals “were not ‘cornfield ditties,’ as some of the bishops of some of these denominations complained, that to be Black is not a curse, as many theologians purported.”

Allen-McLaurin said that decolonizing worship also means really examining the lyrics we use. “I don’t care what hymn I’m singing, if the words ‘whiter than snow’ are in it, I don’t sing it. If the communion liturgy calls for me to be a ‘wretch undone’ or ‘I’m not worthy to gather up crumbs,’ I don’t say that. God created me good, and my ancestors wouldn’t affirm that we’re dirty, that we’re trash, that Jesus’ blood cleansed us and made us white. The blood that Jesus shed gives me strength from day to day, that’s what I affirm. Decolonizing means divesting ourselves of what we’ve been taught for so long.”

She has devoted her life’s work to the history of Black liturgy and reclaiming the worship practices of the Black church.

“Colonization’s goal — capitalism is the first goal — but one of the other goals is to eradicate anything that will come against a dominant majority. When you colonize folk, you have to strip them of everything that’s indigenous to them — their language, heritage, name, practices, rituals, rights. I advocate for wholeness in all facets of lives, to not be afraid to say who you are and not be afraid to be who you are in all spaces and all places, including worship.”

To see and hear the entire broadcast, click here. “Good Medicine” is presented live on the second Wednesday of the month at 2 p.m. (Eastern time) on the 224th General Assembly Co-Moderators Facebook page.