Changes to impact presbyteries in Montana and California 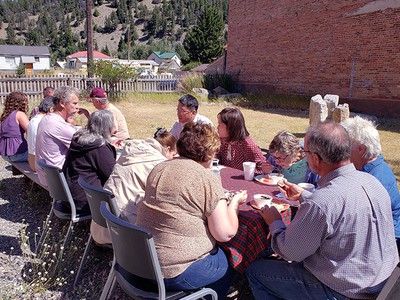 Every Sunday after worship the Basin Presbyterian New Worshipping Community in Montana meets for a shared, home-cooked meal with visitors that are in town. This is one of their summer meals held outdoors in the neighboring park. —Photo by NWC Evangelist/Pastor Ok-Kee Kim

Some changes have been made for two presbyteries in Montana, while two California presbyteries have decided to form a new one. This was part of the agenda of a recent meeting of the newly formed Administrative Commission on Mid Councils.

The commission was authorized during the 224th General Assembly of the Presbyterian Church (U.S.A.) last summer during the church’s first online gathering. It acts with the authority of the GA by approving synods’ requests to organize, divide or combine presbyteries.

During a meeting earlier this month, the commission heard about plans for Glacier and Yellowstone presbyteries to move the boundary between the two to allow Glacier to better facilitate the work of a new ministry in Basin, Montana.

“The ministry emerged by the Spirit and forged partnerships as participants were drawn together in this work of God. We have been finding, discerning, receiving an experience of unity in the common call that God has set before us, and in the power of the Spirit in this surprising and beautiful snapshot of the kingdom,” said the Rev. Dr. Beth McCaw, presbytery leader for Glacier Presbytery. “On any given Sunday, diverse people are found in worship or sharing the meal — Amish farmers from the eastern United States, summer visitors from Californian suburbs, Russian seekers, return visitors from Korea, or Korean families from Canada, alongside Basin residents. All seeking wholeness in some form, all hearing good news. It is a small snapshot of what the kingdom of God is intended to be.”

Under the change, the boundary was redrawn through Jefferson County, Montana, so that the county, north of the Boulder River, falls within Glacier Presbytery.

“The process for redrawing the presbytery boundary was not just administratively smooth — it was an opportunity to glorify God repeatedly in sharing the story in expanding circles — in the presbytery meetings of both Yellowstone and Glacier, then in the Synod of the Rocky Mountains, and finally in General Assembly,” said McCaw. “It was a glad moment to share with the GA Administrative Commission testimony of what God has done; their vote was not just practical, it was (to me) also a moment of praise and glory to God.”

In other action, the commission approved the merger of the presbyteries of Sacramento and Stockton to form a new presbytery to be known as the Presbytery of North Central California.

“Each presbytery has its own culture and history, and each has been shaped by the geography and sense of place in which they are located. They each bear the impact of the upheavals and changes within the PC(USA) that led to a significant number of churches leaving the denomination over a 3–5 year period,” said the Rev. Dr. Mary Westfall, transitional presbyter with the Presbytery of Sacramento. “Both are smaller than they were a decade ago, but each has continued to support pastors and congregations, engage in meaningful ministry and nourish the souls of many.”

Westfall says they are still in the process of envisioning and shaping the values and priorities of the new presbytery.

“The merger of two presbyteries has created the opportunity to be intentional and Spirit-led regarding the values, structure and missional priorities of North Central California Presbytery. As a shared vision is emerging and priorities being identified, there is hope that the congregations of the new presbytery churches will notice an enhanced focus on their well-being, gifts, needs and future sustainability,” Westfall said. “They will experience more opportunity for collaboration between other congregations to support shared mission endeavors, non-geographic small group work including Bible studies, prayer groups, forums of themes such as stewardship, justice, race issues, new worship styles.”

The new presbytery will include all the geography of the Sacramento and Stockton presbyteries, except for Mariposa and Merced counties. Those two will be transferred to the Presbytery of San Joaquin when the commission’s action goes into effect July 1, 2021.

The commission meets again on March 1 to consider a request from the Synod of the Northeast to reorganize the seven presbyteries in New Jersey into four. Anyone wishing to observe or speak to the commission at that meeting should contact Associate Stated Clerk Tricia Dykers-Koenig at tricia.dykers-koenig@pcusa.org.