We need to consider vast wealth accumulation as a mental illness 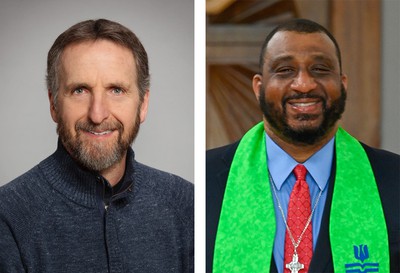 The Rev. Dan Wolpert, co-founder of MICAH (Minnesota Institute of Contemplation and Healing) and the Rev. Gregory Bentley, Co-Moderator of the 224th General Assembly of the PC(USA) (Photo by Rich Copley)

Woe to those who join house to house, who add field to field, until there is no more room, and you are made to dwell alone in the midst of the land.— Isaiah 5:8 (ESV)

He who loves money will not be satisfied with money, nor he who loves wealth, with his income; this also is vanity. — Ecclesiastes 5:10 (ESV)

As our society, and indeed our world, struggles with a wide array of problems and challenges, from the climate crisis to the COVID-19 pandemic, from migration to war and political dysfunction, one daunting reality haunts our political and economic debates: the rise of the Super Wealthy. The gap between those with the most and those with the least is greater now than at any other time in modern history, and the pandemic has only made the problem worse. In America, fewer than 600 people control wealth equivalent to that held by those on the bottom half of the economic scale. While this problem has always existed in human society, we propose that such hoarding of riches be re-examined in modern terms and be redefined as a mental illness.

Religious traditions and teachings have always viewed an obsession with wealth as a problem and an obstacle to a just society and positive relationship with the Divine. Jesus specifically says that you cannot worship both God and money (Luke 16:13), and the prophets chastise those who would hoard land over a just distribution of resources. Drawing upon the Matthew 25 passage that describes the necessity of caring for those who are marginalized in society, the Matthew 25 invitation seeks to eradicate poverty and dismantle structural racism, yet this vision continues to run up against the inequitable distribution of resources that would help solve these problems. In the face of thousands of years of teachings that implore humans to not worship money, we must ask ourselves: Why?

Every era defines and understands “sin,” our disordered relationship with ourselves, each other and God, in different ways. Theologians have used the idioms and concepts of their time to recognize that there are obstacles within human beings that prevent the manifestation of the Beloved Community. In our age, the concept of mental illness has found powerful resonance in a quest to describe the suffering and challenges we face in our quest for life-giving social relationships.

Unfortunately, the categories for mental illness have usually been used, and focused upon, those who struggle to “succeed” in society. With few exceptions, those who “prosper” rarely are labeled as mentally ill. Yet if their success causes immeasurable harm to society and others, perhaps we need to reconsider this bias. What if rather than being seen as “captains of industry,” people who accumulated billions of dollars were understood to be seriously ill individuals?

As mentioned above, we usually understand someone with this disorder as “nonfunctional” and define hoarding in terms of personal clutter. But, as Isaiah recognized millennia ago, accumulation that prevents others from functioning is a social disease affecting the entire body of society. When one has so much that others cannot eat, as is the case with, for example, the Walton family (the owners of Walmart) who have billions of dollars while their workers go to food banks because they do not receive a living wage, then your possessions have congested the social space such that life becomes impossible. The massive over-accumulation by a few is causing planetary clutter while millions do not have basic needs met.

Recognizing such over-accumulation as an illness would realign our social thinking regarding such behavior and would encourage policy to address and limit the damage caused by these very disturbed individuals. It would also help give us a way forward as we seek to solve the problems caused by this behavior.

The treatment for hoarding recognizes that letting go of things is possible and brings life. The restoration of right relationship with “things” allows all to flourish. For people to make a living wage, even if it means a few billion less for some, would bring so much life to society as a whole. The “rich young ruler” (Mark 10:17–27) who encounters Jesus is an example of what is required: “performative religion,” the perception of “being good” isn’t enough, there is still one thing more. His sadness at hearing that he needs to let go of his money is recognition of the need for healing: There is something in his mind that is blocking his transformation. This is the illness of wealth hoarding. In our modern era, such people actively resist policies such as a wealth tax, or reparations for slavery, because the attachment of their illness generates a visceral reaction against letting go of some of their money.

Yet those of us who are committed to the Matthew 25 vision of a just kin-dom know that when the “mighty are brought low” (Mary’s vision in Luke 1) they actually become more healthy and human, and as the “lowly are lifted up” they are given space to flourish. This is the kingdom process that Jesus calls us to embrace.