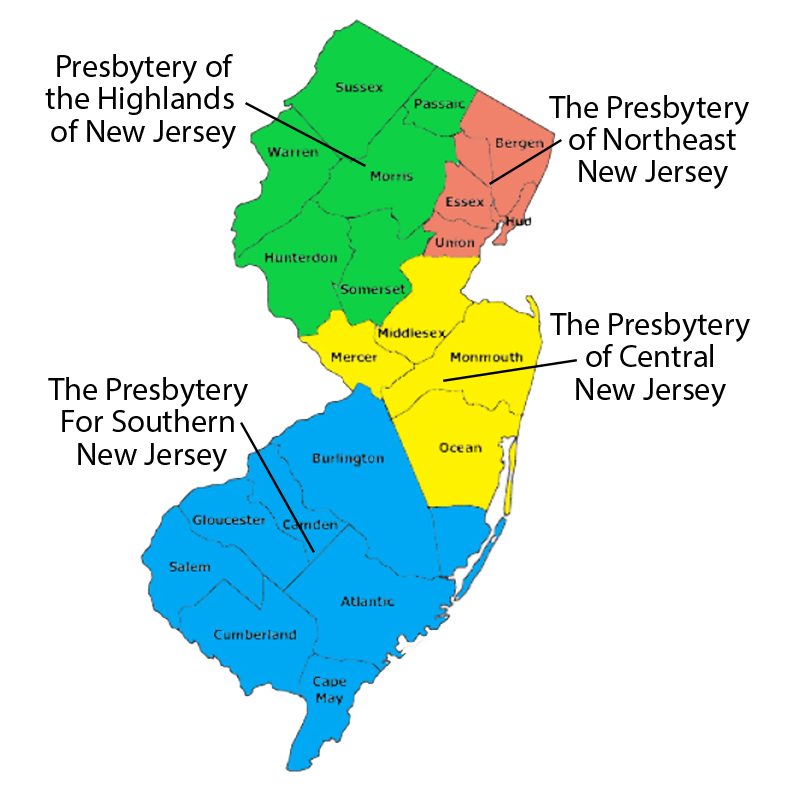 Some changes have come to seven presbyteries in New Jersey. Last week the Administrative Commission on Mid Councils approved a plan to re-imagine the previous seven into four new missional communities/ecclesiastical presbyteries.

“The Book of Order gives authority to synods to create presbyteries and change boundaries, with General Assembly approval. But this process really came from the ground up. Presbyteries and people in New Jersey wanted to look at their own needs and what they thought the future held for them and how to best accommodate that,” said the Rev. Nancy Talbot, stated clerk of the Synod of the Northeast. “The synod has been a partner in this, working alongside the people, but this really was a ground-up initiative rather than synod coming in and making decisions. That’s really important.”

Talbot says the conversation began in 2003, but it took a few years to get things moving. Once conversations got underway, two people were chosen from each of the seven presbyteries to begin a three-year process of talking and visioning.

“This is where they raised the idea of not only changing the boundaries to become four larger presbyteries instead of seven, but also to consider becoming missional communities, which would be the focus of everything that they do,” said Talbot. “It isn’t solely about less members, but taking the opportunity to imagine what could be very different for the communities we live in.”

Talbot says they don’t like to refer to the change as a merger.

“We’ve stayed away from that language intentionally. This is not simply two of the presbyteries merging with each other. What they looked at was the culture,” she said. “The emphasis is on the missional community and not on a merger, which is a more corporate way of looking at the same picture.”

Talbot says there’s a lot of buy-in and excitement about the changes that are taking place.

“At the same time, people are grieving. People are grieving for the loss of their presbyteries and what they’ve known for many years,” she said. “We may not be in the same presbytery anymore, but we can still be friends, or we’ll see each other when missional communities are doing things together. We recognize that we are experiencing excitement for what’s coming as well as loss.”

For a time, Talbot says expenses will be paid out of corporation as asset funds are being transferred over to the new ecclesiastical presbyteries.

Staff from the current seven presbyteries will remain while the three corporations are closing out.

The remaining four corporations have 30 days to change their names.

The reorganization has reduced the number of PC(USA) presbyteries from 170 to 167. When the Presbyteries of Sacramento and Stockton join to become the Presbytery of North Central California on July 1, there will be 166.