Former vice president served his country and his church 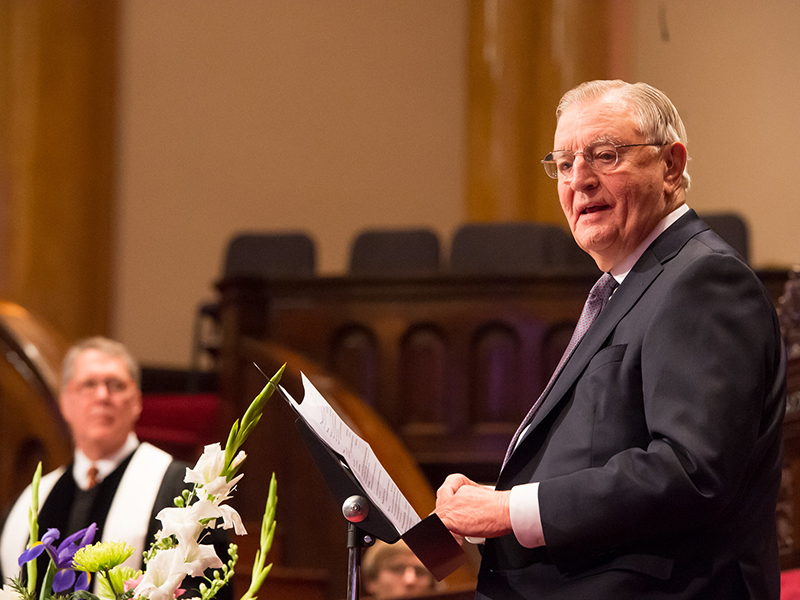 He served as vice president of the United States from 1977 to 1981, but for many across the country, Walter Mondale will be remembered for his historic decision to ask Geraldine Ferraro to be his running mate in the 1984 U.S. presidential election. That groundbreaking decision opened the door for women to seek the nation’s highest office, helping lead Kamala Harris to become the first woman and person of color to be elected vice president.

Mondale had a long political career in Washington, D.C., and was elected to a full Senate term in 1966. He was reelected six years later and resigned in 1976 to prepare for his new role in the Carter administration.

During his time in the Senate, Mondale proved to be a champion for people, supporting desegregation of schools, tax reform and fair housing as well as consumer protection.

But what many people don’t know is that he was a dedicated member in the Presbyterian Church (U.S.A.). Mondale and his wife, Joan, joined Westminster Presbyterian Church in Minneapolis in the early ’90s and remained a member there until his death on April 19.

The Mondales’ church connections run deep. The former vice president’s father was a Methodist pastor, while his father-in law was a Presbyterian minister. Staying connected and involved with their church came natural for this couple, and we know the congregation and staff mourn his passing.

God has a call for each of us, but it is up to us to heed that call. I thank God that Walter Mondale acted on that tap on the shoulder and we pray that in these difficult times, the Lord is reaching out to others to continue the work he and others have started. For it is in times such as these that leadership is needed that will break the bonds of repression, racism and poverty and lead us to a better world where everyone has a seat at the table.

On behalf of the PC(USA), we extend our condolences to the Mondale family and his Westminster family as well.