Do we want to be healed? 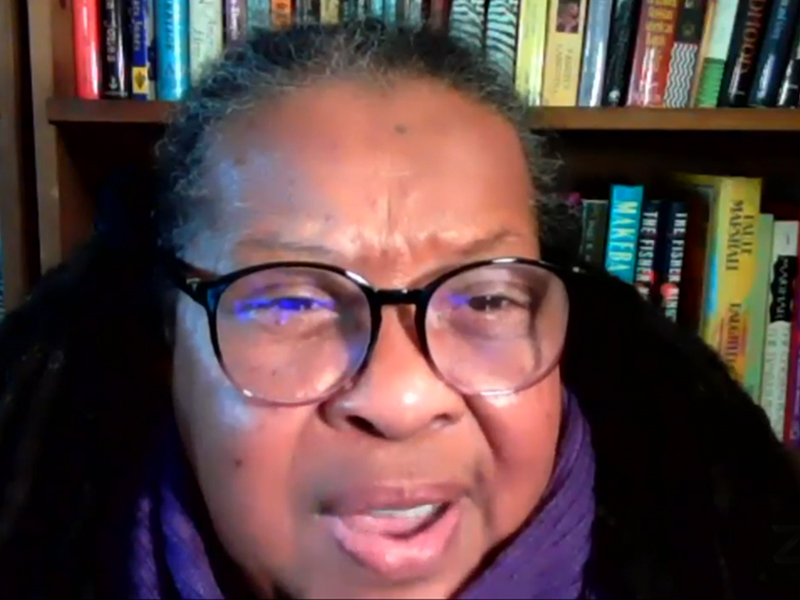 “I’m inviting the Church to finally go into the wilderness, as Jesus did, and decolonize their memories,” said Ruby Nell Sales, during the May broadcast of “Good Medicine,” hosted by the Rev. Gregory Bentley and Ruling Elder Elona Street-Stewart, Co-Moderators of the 224th General Assembly (2020).

Sales is a human rights activist, public theologian, and social critic, whose work appears in many journals, online sites, and books. Sales joined the Student Nonviolent Coordinating Committee in the 1960s as a teenager at Tuskegee University and went to work as a student freedom fighter in Lowndes County, Alabama. She attended and received degrees from Tuskegee Institute, Manhattanville College, Princeton University and Episcopal Divinity School.  She is also the founder and director of the SpiritHouse Project.

The discussion’s focus was Decolonizing Our Memory. “Jesus went into the wilderness and began to expunge himself of all the marks of the Roman empire and to begin a journey of reconciliation and reparation,” said Sales. “I am asking the Church to do some deep soul cleaning and prepare to make amends.”

Sales noted some of the harmful injustices that have been perpetrated against communities of color for more than 400 years, such as the enslavement of Africans, land stolen from Indigenous populations and children taken from their families, African Americans denied basic civil rights, and Indigenous peoples without access to clean water “in a nation with this level of riches.”

“We must look at the horrors of this,” she said. “This is unacceptable.”

This question was posed: How do people reconcile when they don’t remember what there is to reconcile?

Sales said Christians “must intentionally go into a process of decolonizing one’s memory, and you must do that by looking at yourself and the marks of the empire that you yourself exhibit. You must make an intentional effort to cleanse oneself, not cleanse me as a Black person of the marks of the empire, but  to cleanse all of us and demand the country speak the truth about itself.”

She shared this illustration: “We may not know what happened in 1898 (when the U.S. Supreme Court's Williams vs. Mississippi decision began creating barriers for Black voters), but we know what happened on January 6 — an attempted militarized coup. And at the heart of that was the assumption that America belongs to white folk, who must take back the country that Black and brown and Indigenous people took away from them by voting them out of power. This is a white supremacist message that goes all the way back to 1898.

“White supremacy is antithetical to democracy. Those two things cannot coexist,” Sales continued. “As Christians we must speak the truth that oppression and systemic injustice is a spiritual malformation that breaks up our relationship with each other, but also with God. The Church must ask itself, is it in the business of healing or will it continue to stand on the side of the empire?”

She noted the importance of how words matter in institutions. “What does it mean when we use language like ‘inclusion’? That means we’re giving someone the authority to own the table, and that they have the power to bring us to their table. There’s a difference between inclusion and democratization.”

Sales said it is a sin when spiritual people tell the people of God they are marginal. “Our good news is that you might be marginal with the state, but in the eyes of God and each other you are somebody. We have to perpetuate a theology and a pedagogy of somebody-ness. We must remember each other, and you can’t remember each other by giving in to the thoughts and words. You can’t be in the business of redemption when you’re not speaking the truth about the lives of people who are being devastated and killed.”

In telling the truth, she said, we must also stop promoting Black suffering as the only aspect of Black life. “If we were wholly a traumatized people, then what has been the meaning of a Black declaration that God has been our shelter in a raging storm? I’m here today as an African American woman, not because my ancestors were traumatized, but because they created a redemptive theology, that although the enslavers said they were property, my ancestors declared they were children of God and they set about to make it so. They went to church on Sunday, and they shouted, to grieve, lament, and celebrate they made it another week to go out into the world.”

Street-Stewart noted that as a member of the generation who grew up through the civil rights movement, “I must remember all that my great grandparents and their great grandparents had done, and that I am living in the reality they were looking for. But this work is not done, and there is so much more around remembering and repairing for us to do. There is so much to be working on, in a community.”

Sales responded, “Even as we offer the critique, we must also remember what Vincent Harding reminds us, that there is hope in history. This country has always had what Martin Luther King called deviants, those people who deviated from the stream toward fascism, who put their lives on the line to advance democracy.

“We have a choice,” she continued. “We are not entrapped by bad history. We can all change and build a new story and new chapters. We have agency, thanks be to God. The Church must reinforce and build up a generation of young people who’ll create a social gospel for the 21st century that moves us away from disposability to centrality. It can be done.”

In conclusion, Sales said, “I leave with the theological question: Do we want to be healed?”

To see and hear the entire broadcast, click here. “Good Medicine” is presented live on the second Wednesday of the month at 2 p.m. (Eastern Time) on the GA Co-Moderators Facebook page.