Listening to those who are centered in the truth 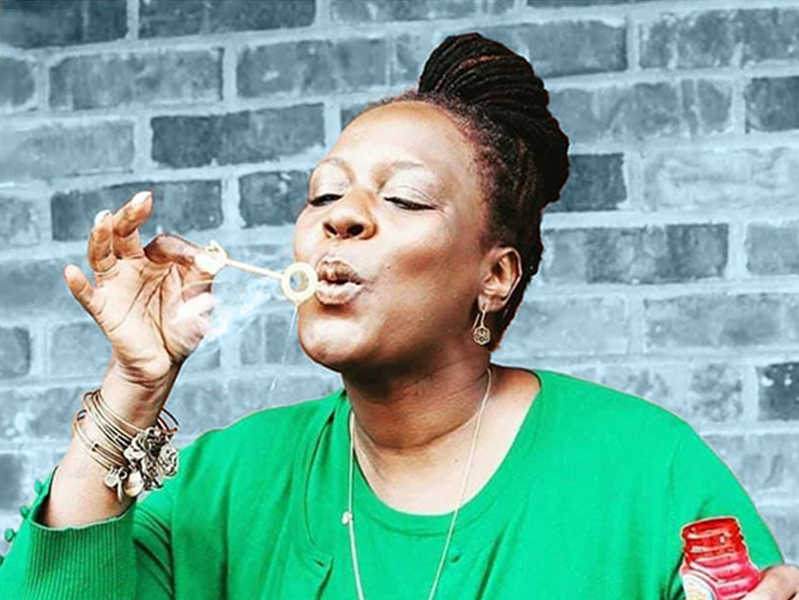 Lesesne is an educational design leader specializing in instructional coaching, curriculum, programs and pedagogy that employ an African American education-for-liberation approach to inspiring Black learners. Her work also leverages the transformative characteristics of the Black teaching tradition. She has more than 16 years of experience as a teacher and district-level leader in predominantly Black and Latinx urban school districts. She is the founder of the Sisters in Education Circle and Lesesne Learning. She received her doctorate in educational and organizational leadership from the University of Pennsylvania.

The discussion’s focus was “Decolonizing Our Pedagogy.” A report published by the U.S. Department of Education last year said that 79% of U.S. public school teachers are white, yet student populations are more racially and ethnically diverse than ever.

Growing up in Broward County, Florida, Lesesne recalls that Black educators in her community were “just part of our oral histories. People would talk about politicians and leaders, and then also in the same vein these amazing figures who were Black teachers in the segregated schools in the South who really created Black pedagogical genius. So, it was not uncommon to hear about teachers as if they were celebrities. This was part of my understanding of the world.”

By the time Lesesne became a teacher herself, she noticed there weren’t as many Black teachers. She said she also noticed “a false notion that Black people don’t know how to teach our children and that we don’t value education.” During her academic and professional life, Lesesne has widely encountered the misconception that students “didn’t get a good education” in segregated schools, discounting the practices and legacies of Black teachers.

“This made me start paying attention to not just the need for more Black teachers but more respect and recognition of the legacy of Black teaching. These personal experiences caused this cognitive dissonance — and a little anger — in me that made me feel like this is really important,” she said.

Lesesne believes it is not a coincidence there are few Black and Indigenous adults working in public education these days. Research has shown that more than 38,000 Black teachers and administrators lost their jobs after the 1954 Brown v. Board of Education decision. “We talk about the fact there are only 6.8% of Black teachers — that has been intentional. This said, if you’re going to insist on equality — what we thought was equality at the time was desegregated schools — we are certainly not going to have all these Black adults around, likely with this liberatory mindset.” She said there is still a “false sense of white superiority” that white adults are needed to teach Black and Indigenous children.

She pointed out that studies confirm Black teachers impact Black students in profound ways, making them feel safer, more engaged and less likely to abandon school. Using her own instincts from the Black teaching tradition, Lesesne helped raise $5 million to establish Mentoring Tomorrow’s Leaders in Broward County Public Schools, where she began her teaching career as a high school science teacher. “Let’s not focus on what is wrong with Black boys. You’re saying to me, well, 50% of Black boys don’t graduate from high school. But my colleagues and I said that means 50% of them do, so the experts on the campus are those boys,” she said. High-achieving Black male students were recruited and trained in organizational leadership to run what has become a thriving peer-mentoring program for young men who are at risk.

Education has been the “vehicle for colonization,” but Black liberation and the art of Black teaching has countered that, Lesesne said. “Decolonization is really about listening to people of color and decentering whiteness. One of the lies of colonization is that white people are the pinnacle of humanity, therefore the rest of the world needed Europeans to come and rescue us and civilize us. It was a lie created to justify the genocides. This notion that Indigenous and Black folks are less intelligent, less cultured, not as spiritual, not as educated is absolutely wrong, and history says that and what we know currently says that. Decentering whiteness really is divesting from that lie and then going back and listening to those of us who are centered in the truth.”

To see and hear the entire broadcast, click here. “Good Medicine” is presented live on the second Wednesday of the month at 2 p.m. (Eastern time) on the 224th General Assembly Co-Moderators page on Facebook.