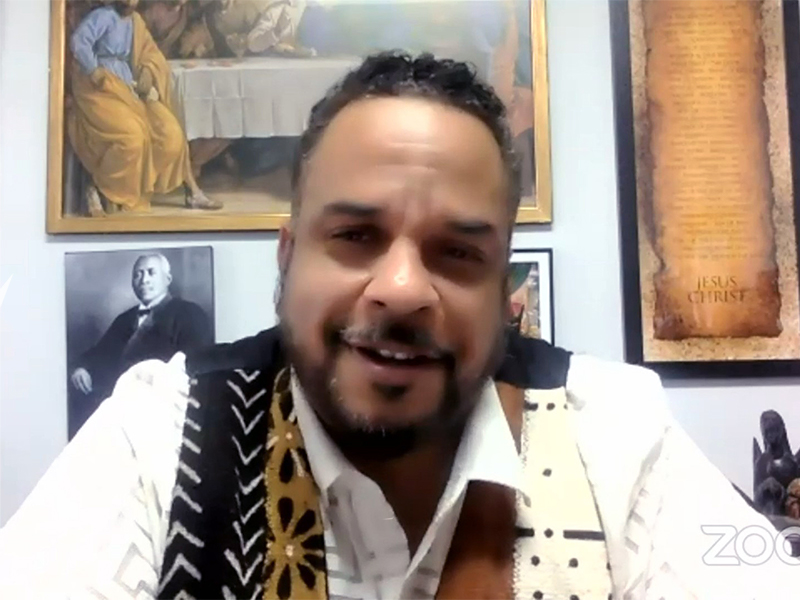 The Rev. Lukata Mjumbe discusses congregational ministry with the Co-Moderators of the 224th General Assembly (2020) during Good Medicine on August 11, 2021.

The Rev. Lukata Mjumbe discusses congregational ministry with the Co-Moderators of the 224th General Assembly (2020) during Good Medicine on August 11, 2021.

“As we prepare to return, we’ve gone 16 months and beyond without being able to make use of the physical structures of our buildings, so I pray we have come to see our identities as churches that are not bound up in our idol worship of buildings,” the Rev. Lukata Mjumbe said during the August broadcast of “Good Medicine,” hosted by the Rev. Gregory Bentley and Ruling Elder Elona Street-Stewart, Co-Moderators of the 224th General Assembly (2020).

Mjumbe is pastor of Witherspoon Street Presbyterian Church in Princeton, New Jersey. He was recently appointed as faith-based policy advisor to U.S. Rep. Bonnie Watson Coleman. He also serves as an interfaith community organizer in Trenton, New Jersey, and among the religiously diverse communities in the surrounding 12th Congressional District. He is a graduate of Princeton Theological Seminary.

The focus was “Decolonizing Our Congregational Ministry.” To launch part of the discussion, Mjumbe referenced “Night-Vision: Illuminating War and Class on the Neo-Colonial Terrain,” which was republished in 2017. He said the book explores how “we can’t use old solutions and old strategies and old ways of thinking about the nature of our problems to solve the new problems.”

Mjumbe believes churches are “stumbling” in this neocolonial reality. He used the colorization of black-and-white films as an illustration. “When films were colorized, some people were horrified, and some shouted for joy because it allowed them to look at it in a whole new way,” he said. “But it was the same story, it was the same characters, it was the same beginning and ending, it was just colorized. So, we’ve colorized some things in our congregational ministry, but we also think we’ve emerged victorious … that we have overcome.”

There appears to be much to overcome in congregational ministry in today’s world. Mjumbe noted how churches across the denomination are lamenting low Sunday morning attendance numbers and are trying to create new strategies to get people inside the church. He said Sunday worship is a “colonial model” based on the idea of “bringing in the masses into the institutions of the mother country.” So, he posed the question: Why are you trying to get them inside the church?

“The only time our churches are open for business is Sunday morning and maybe a midweek Bible study,” said Mjumbe, speaking in the context of pre-pandemic times. “How many churches had congregational ministries actively engaged on Monday, on Tuesday, on Wednesday, on Thursday, on Friday, on Saturday? How many schools were being run, how many clinics being organized, how many health centers, or legal aid programs, or English as a Second Language or Spanish as a Second Language, which we need here to learn the language of our community because this historic African American community is now a majority Spanish-speaking Guatemalan community?”

He also suggested establishing yoga and martial arts classes, checkers and chess clubs, day cares, senior programs, or serving as a heating and cooling center during extreme weather, which his church is currently pursuing. Better yet, he said, “how about we find out from the people themselves what it is they need? How much have we mobilized our buildings in order to become true resources for the people of God?”

For example, Mjumbe said, food pantries and programs are common in churches. “These feeding programs are very important, and in some communities if they did not exist people would not have the nutritional requirements they need. The question I ask that the neocolonial congregational ministry normally wouldn’t ask is that what have the people told you that they need? How are we repeating the colonial model when we provide food from a pantry, but we don’t challenge the food insecurity and the systems that lead people to be in need of nutritional support to begin with? There’s not a grocery store nearby, there are no fresh food or fruits and vegetables where they can go to shop. Are we re-creating a model of dependency? If so, this has not met the challenge as Matthew 25 churches.”

Mjumbe recalled when he and Co-Moderator Bentley were both serving in Alabama and they talked about the need to organize a ministry for the “dissed.” He said among “all the different colors” are the disinherited, the discriminated, the disregarded, the disrespected. “Those are the people we need to talk to and with and hear from. They’re not coming to your church on Sunday morning, so what are the strategies in terms of our congregational ministry so that we are listening and responding to those voices?” he said. “Being a post-neocolonial church means being in direct conversation.”

He’s excited about “how we move from talking about it to being about it.”

“As we return,” said Mjumbe, “how can we find a way that seven days a week we will listen to the people — there is no shortage of needs — it’s going to require work — yet it’s going to be so important how, in this new period, we can transform our congregational ministry into resources that people actually want and need.”

To see and hear the entire broadcast, click here. “Good Medicine” is presented live on the second Wednesday of the month at 2 p.m. (Eastern time) on the 224th General Assembly Co-Moderators page on Facebook.