Home News Hearing from a diversity of voices

Hearing from a diversity of voices 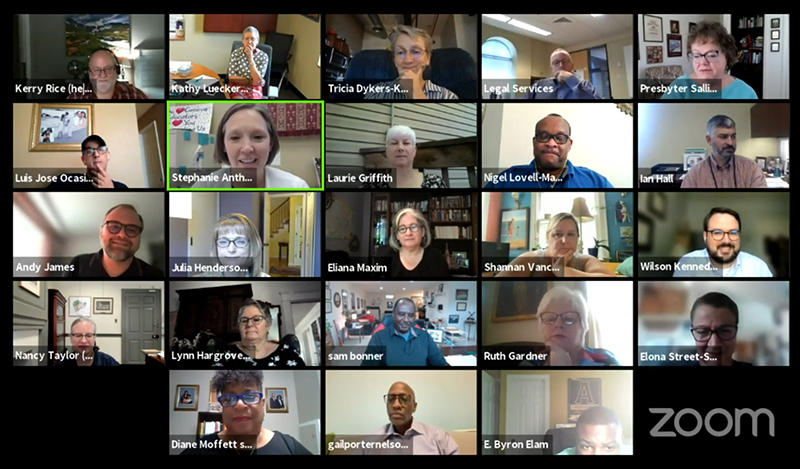 The Committee on the Office of the General Assembly meets via Zoom on August 19, 2021.

The Committee on the Office of the General Assembly meets via Zoom on August 19, 2021.

As the Presbyterian Church (U.S.A.) approaches another historic General Assembly next year, church leaders are making sure that all voices are heard across the denomination. In its monthly meeting on Thursday, the Committee on the Office of the General Assembly received updates on the planning as well as efforts to make this a more inclusive gathering.

Julia Henderson, OGA’s leader of Planning and Business, provided a summary of accomplishments as well as a list of ongoing and future items.

The 225th General Assembly of the PC(USA) is scheduled to take place as a hybrid gathering between June 18 – July 9, 2022. Committee meetings will be held in person at the Presbyterian Center in Louisville, with online plenaries taking place afterward. The entire Assembly will cover a three-week period.

COGA and OGA leaders have been working to ensure participants are equipped and trained as well as expanding the voices at the table to include those who may feel their input isn’t valued.

Jihyun Oh, director of Mid Council Ministries in OGA, says COGA and staff are proposing a shift in thinking about overtures brought before the Assembly, including the introduction of “Choice Points” and “Equity Primes,” concepts to help committee leaders and commissioners take a pause before voting.

“After a while, people get into a habit of either approving or disapproving motions. Folks don’t always think about the different options that are present. It could be approved with comment or disapproved with comment,” said Oh. “It would be good to present the different motions that can be made about an overture beforehand. Sometimes people get stuck in that approve/disapprove mindset. This can help give a brief pause to remember what the options are.”

The Rev. Dr. J. Herbert Nelson, II, Stated Clerk of the General Assembly of the PC(USA), says it offers an opportunity to hear the broader perspectives when it comes to decision making.

“Oftentimes people are marginalized because they can’t navigate the process or feel intimidated,” he said. “This gives an opportunity to invite more people into the process where they can feel affirmed or share views that may or may not be in concert with what others believe.”

COGA’s Communications Team is hoping that a “diversity of voices” on how General Assembly will be transformative will also generate interest among those who feel they’re not heard. Teaching Elder Wilson Kennedy says the team is reaching out to potential champions to help share the message.

“We want them to help us craft a narrative that invites our church to come into a space that is vulnerable for a lot of people,” he said. “We want to invite them in a safe way and through our collective work, no matter the format, ensuring equity and equal access.”

Mid Council Ministries leaders updated COGA on recent conversations with mid council leaders regarding next year’s Assembly and the best way to prepare commissioners and conduct the gatherings.

“We have some good ideas and some mid council leaders will be working with us on those ideas,” said Tricia Dykers Koenig, associate director of Mid Council Ministries. “We will also discuss how to make those happen and share with mid councils. We have a commitment to do what we can to keep those talks going.”

COGA also got an update on renovation plans for the first floor of the Presbyterian Center.

“This has been a very collaborative process and we are engaging with other residents in the building and looking at what a welcome center would look like, an interpretative space for visitors when they come in,” said Kerry Rice, deputy stated clerk. “Demolition should begin next month and will focus on new space for the church records center.”

The space is projected for completion between April 1 and May 1, 2022.

Tags: coga, committee on the office of the general assembly, diversity of voices, ga225