Home News Compromising diversity for convenience is not an option, says COGA

Compromising diversity for convenience is not an option, says COGA 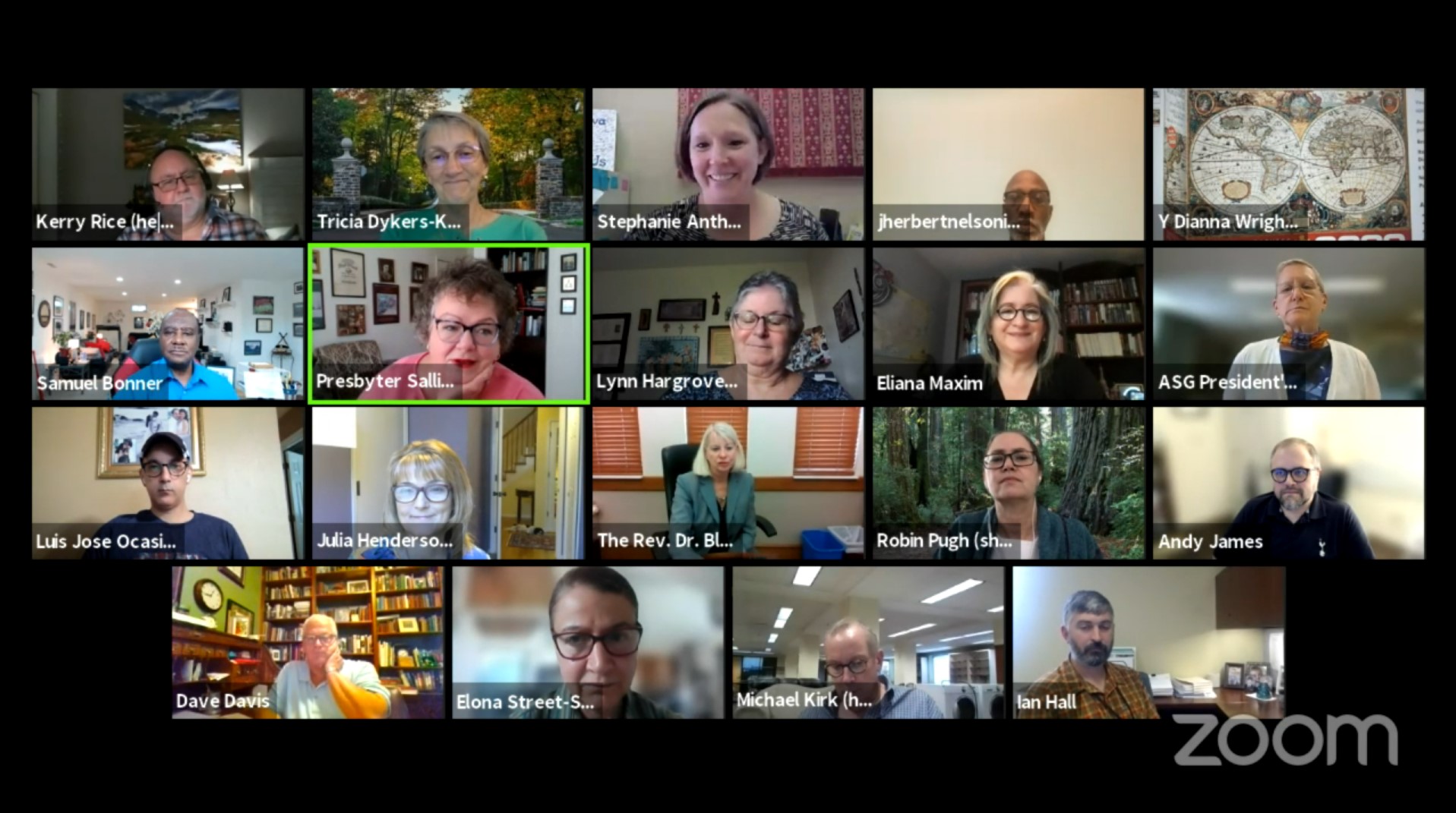 The Committee on the Office of the General Assembly (COGA) meeting via Zoom on September 16, 2021.

The Committee on the Office of the General Assembly (COGA) meeting via Zoom on September 16, 2021.

Organizers for the 225th General Assembly of the Presbyterian Church (U.S.A.) knew there would be challenges in planning for a hybrid event. The three-week block of time necessary for committee meetings and virtual plenaries next year has created some headaches for mid council leaders as they seek those willing to serve as commissioners and advisory delegates.

“We surveyed mid council leaders on questions related to this process. Mid councils have a number of opinions and don’t always agree with one another,” said Kerry Rice, deputy stated clerk, Office of the General Assembly. “There’s not a clear consensus about whether this would help.”

Staff looked at alternative assignment processes that would provide definitive dates for in-person participation but might compromise the diverse makeup of committees. Leaders presented their findings to the Committee on the Office of the General Assembly on Thursday. They included:

While complimentary of the effort to address mid council concerns, COGA felt the values established to make General Assembly more equitable should be the top priority.

“I’m very aware of the challenges of asking folks to set aside three weeks and not knowing when they’ll be serving,” she said. “I think this proposal would require us to set aside a value, which I believe is not debatable or negotiable and that is commitment to diversity first. We have an opportunity to say that we are willing to work through the inconvenience in order to achieve a higher value, and we want GA to be as reflective of the kingdom of God as possible.”

“We’re five weeks out from our presbytery meeting to elect commissioners. The ship has sailed along with the benefit that might come from it. I feel it is offset by the potential for confusion and concerns around diversity,” he said. “If we could have done this two months ago, I might have been in support of it. We need to stay the course and continue to be apologetic and understanding, encouraging our presbytery leaders as they seek people to serve and that the Holy Spirit will open hearts and minds for those to do God’s work.”

The Rev. Dr. J. Herbert Nelson, II, Stated Clerk of the General Assembly of the PC(USA), says OGA went into planning for next year’s Assembly recognizing the need for change in how the Church conducts business.

“We are up against a wall in a lot of ways, but we are also in the process of shaping core values around who we are and whose we are. How does that play out in a General Assembly that sometimes turns into a real power game and what does that do for those who have not had a voice?” asked Nelson. “I recognize the difficulties of piecing this together and we may not reach all of the goals we are looking at. The larger question is how do we build an Assembly that has a significant shift in our values, power, race, and who does and does not have access?”

Ruling Elder Elona Street-Stewart, Co-Moderator of the 224th General Assembly, says this is the reality of a majority white church.

“We talk about wanting presbyteries to really understand what criteria we need to create more diversity, but we are mirroring the history of the Church,” she said. “Where are all of the decisions being made and are they moving in a uniform way toward the common goal of changes in the Church? Some people will have to step out of their positions and leave a seat at the table or we won’t increase diversity.”

“There’s one diversity we should be thinking of as well and that would be at the income level, economic diversity,” said COGA member Robin Pugh. “Although I am one of the people who support this new design for General Assembly, the side effect is we have this large chunk of time that people will have to keep open. That may be a challenge for people in certain kinds of jobs who have less flexibility in term of vacation or the ability to determine their work schedule.”

The 225th General Assembly is scheduled for June 18–July 9, 2022. GA committees will meet in person in Louisville between June 20–July 2 followed by online plenaries for the remainder of the Assembly, July 5–9. Committee schedules will be designed to minimize the number of people meeting at the same time.