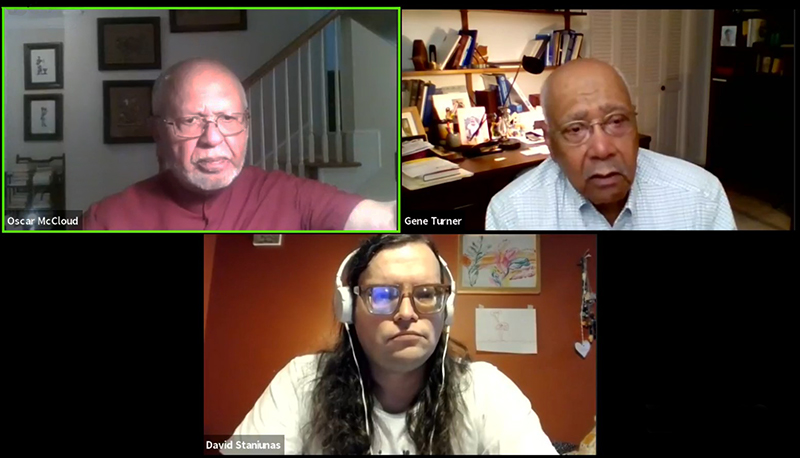 Fifty years ago, a United Presbyterian Church grant of $10,000 to the Angela Davis Legal Defense Fund “brought out the best and worst in the Presbyterian church.”

Those were the words of the Rev. J. Oscar McCloud, spoken during a recent PHS LIVE webinar about the grant and its aftermath. McCloud was joined during the online discussion by the Rev. Dr. Gene Turner and Presbyterian Historical Society Records Archivist David Staniunas, who moderated the session and shared archival materials about the debate surrounding the grant.

Audience members joined on Zoom or Facebook Live. You can watch the full recording here.

Turner and McCloud had first-row seats for that much talked about, and widely misunderstood, history from a half-century ago. They led the effort to facilitate the grant — McCloud at the Council on Church and Race, which eventually released $10,000 to the Angela Davis Legal Defense Fund, and Turner at the Synod of the Golden Gate, the mid council that approved the request for support.

Making that request was St. Andrew Presbyterian Church in Marin City, a San Francisco-area congregation whose membership knew Angela Davis and was concerned she wouldn’t receive a fair trial. Davis, a Black Marxist and community activist, had been charged with murder and kidnapping in connection with a Black Panther prison escape.

According to the History Channel, Davis’ trial “began in March 1972 and drew international attention because of the weakness of the prosecution’s case and obvious political nature of the proceedings. In June 1972, she was acquitted of all charges.”

Turner said that he and others at the Synod of Golden Gate who reviewed the congregation’s request “believed Angela was innocent.” (Both Turner and McCloud emphasized that the grant was not for Angela Davis, but for her defense fund.) The national church’s Council on Church and Race had been established years before by the General Assembly to focus on issues of racism and injustice like those informing the case against Davis.

After the grant of $10,000 was announced at the United Presbyterian Church’s 184th General Assembly in Denver, the blowback began — from inside and outside the denomination. 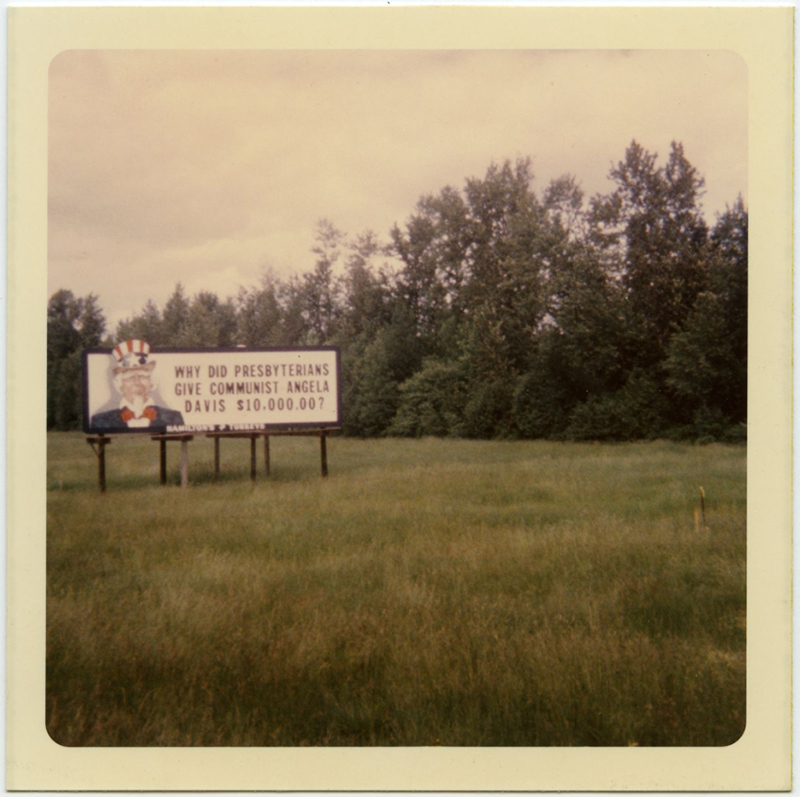 On screen, Staniunas showed one of the letters from PHS’s collections written by aggrieved Presbyterians. In that correspondence, a “disgusted Presbyterian” resented “having to donate money to that sub-human Angela Davis through our church.”

Turner and McCloud spoke about the extraordinary outcry following the grant relative to other times when the Council on Church and Race had provided legal funding.

McCloud said that “the fact that [Angela Davis] was a Black female and a Marxist were three strikes against her. We expected a bigger reaction after a $25,000 assistance fund to get Black Panthers out of jail, but there wasn’t any response that I remember.”

Turner mentioned that President Richard Nixon had referred to Angela Davis “as the most, or one of the most, notorious criminals” in the United States. Turner also pointed out that then-governor of California Ronald Reagan had ordered Davis’ arrest.

Turner and McCloud not only facilitated the grant, they responded to the backlash by joining a group of 20 Black Presbyterian pastors who made personal contributions to restore the $10,000 Council on Church and Race emergency funds.

On screen, Staniunas shared a statement signed by the 20 pastors. McCloud emphasized that the group didn’t reimburse the church because of opposition from white Presbyterians, but rather as a statement of faith in the Black community.

“This predominantly white church will have even less credibility in the Black community if we do not perform this act,” the statement reads. 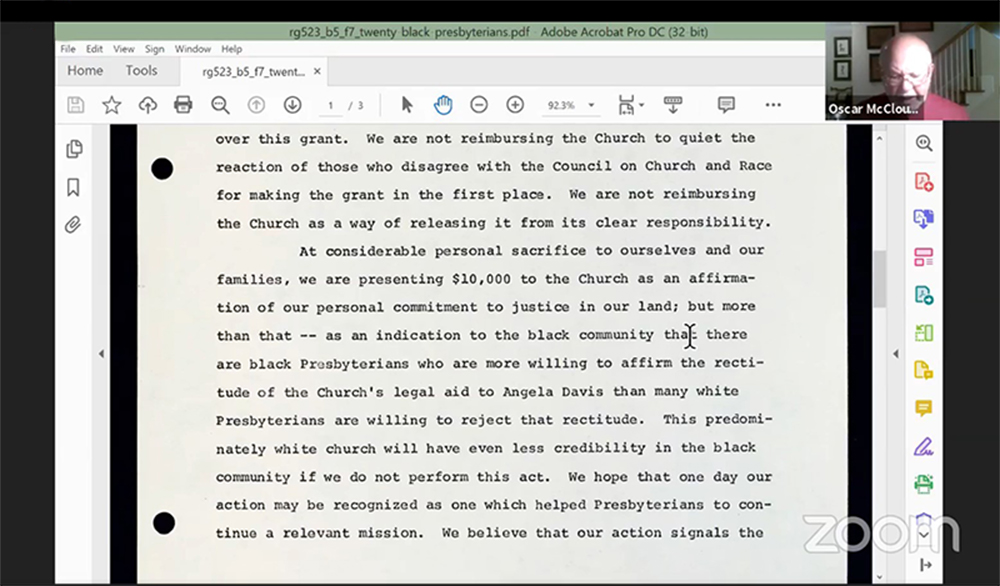 Statement by Black pastors who restored funds, circa 1971–72.

Statement by Black pastors who restored funds, circa 1971–72.

McCloud urged people in 2021 to read the statement in order to understand the issue of racial justice 50 years ago. “Gene and I are two of the only signers still alive,” he said.

The session ended with a wide-ranging Q&A that touched on church administration, calls for peace and justice work in the Confession of 1967, the Black Manifesto in 1969 and anti-racism work since Reunion in 1983.

During the Q&A and earlier in the session, McCloud and Turner set the record straight about individuals involved in the Angela Davis Legal Defense Fund debate.

McCloud said that General Assembly Moderator Stair was less supportive behind closed doors than the statement she made as moderator would suggest, with Stair going so far as to ask national church staff to resign because of the handling of the grant. No one did resign, however, including the Rev. Gayraud Wilmore, who kept working as a leader with the Council on Church and Race.

Staniunas asked what advice McCloud and Turner would have for Presbyterians today, as they seek to make church, and society, whole.

“Keep the pressure on,” McCloud said. “Keep hope alive. As a people of faith, we have to maintain hope. If we lose hope, we’ve lost.”

“Apply the pressure where you are,” McCloud added, a reminder that the members of St. Andrew Presbyterian Church made the first appeal to support the Angela Davis Legal Defense Fund. “Only so much pressure can be applied from the top down. Income comes from congregations. We have to have change at that level.”

Turner picked up on the idea of faith, and its indispensability in doing justice work.

“I have a strong faith these issues will be addressed, but maybe that’s just my faith. … [Racism and injustice] have been a problem for centuries.”