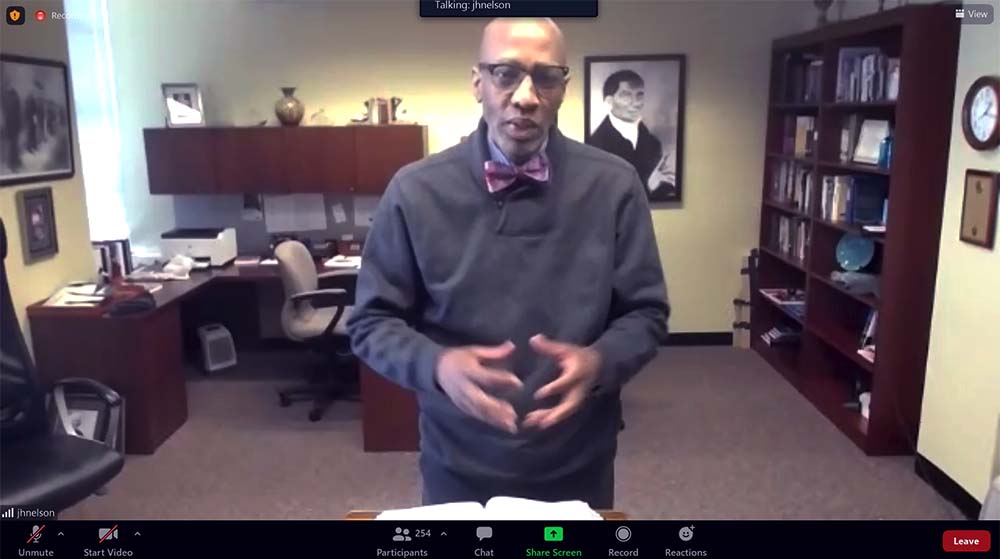 The address was part of Nelson’s ongoing effort to shine light on the contributions of America’s health care workers during the Covid-19 pandemic.

It was also a chance to remember King’s vision of a society where equality of opportunity is shared by all.

The Rev. Richard Jones, a member of the Presbytery of Baltimore and Luminis chaplain, had invited Nelson to speak.

Two more speakers preceded Nelson: eighth-grader Mawuena Davis, the winner of a writing contest, reading her poem, “I Am…” and a Luminis chaplain reading passages from King’s Letter from Birmingham Jail.

Those passages mentioned the Apostle Paul leaving his home village and King’s own need “to carry the gospel of freedom beyond my own home town” as well as his concern for “the interrelatedness of all communities and states.”

In his address Nelson connected those ideas, pointing out that health care is one type of freedom many in the United Stated and around the world are currently denied.

Speaking to over 250 Zoom attendees from his office in Louisville’s Presbyterian Center, Nelson began with a personal story. As a child he had needed open-heart surgery. But on the day the surgery was scheduled, the doctor wasn’t available because of a death in his family.

Nelson’s parents prayed over the question of whether to go through with the surgery with a less experienced doctor.

“We have been waiting for this for a long time,” his parents said, according to Nelson, “and the hour is now.” The surgery happened that day, with the medical resident, Dr. Halston, presiding.

For health care professionals, the last two years have included thousands of hours of crisis decision-making and emergency medical intervention.

Nelson thanked the Luminis staff directly for their work, including health care administrators who help the ill and their caregivers, even when that means battling exhaustion or putting their own health at risk.

After acknowledging with a smile that he was “after all a pastor,” Nelson described Jesus’s healing ministry, which he said was useful to people of all faiths: 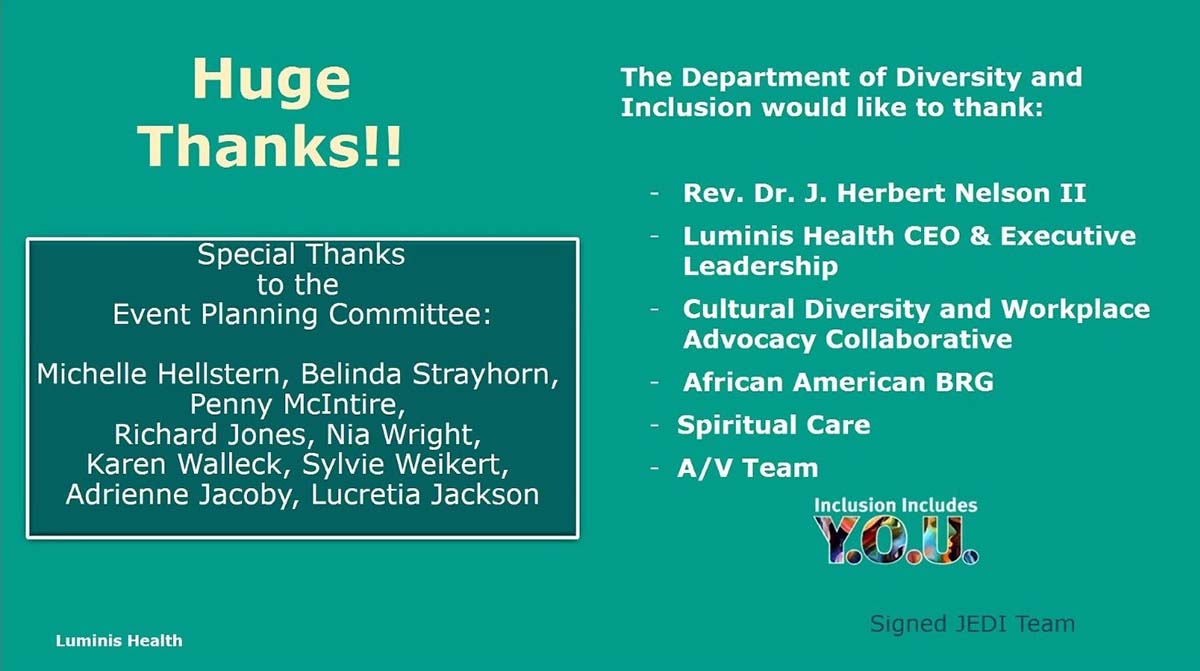 “Jesus was continually getting in trouble wherever he went, trying to do right by the one who had sent him to do his work. Wherever he went, there was the question about who was worthy or his healing.”

“In our system, who deserves health care is a question we also hear,” Nelson added.

“All of us are created in the likeness of God … We all deserve access to health care we can afford.”

Nelson returned to King, who “was talking about the injustice of people being left behind throughout his ministry. Those who are clawing for life every day. Those with children who leave school because they don’t have the advantages of society. Those who are trapped instead of free.”

“I think about your work,” Nelson told the Luminis staff, “and how many fewer people would die each day from COVID and other ailments if we could all lift up the banners of equality, empathy and love.”

“A part of that is spiritual. It’s doing something without knowing what the outcome might be, or what will happen to you. And you do it because there is something inside you called love.”

Toward the end of the address Nelson said, “The challenge of the 21st century is learning to love the otherness of others,” connecting back to the chaplain’s reading from “Letter from Birmingham Jail” and its demand for justice “beyond my own hometown.”

On Zoom — in Louisville and Anne Arundel County — Nelson ended the keynote with more appreciation for Luminis’s health care workers, many of whom returned their thanks in the chat.

When he sees the “big scar down the middle of my chest,” the aftermath of his childhood heart surgery, he thinks of health care workers and others who help those in need. He thinks of Dr. Halston, the resident at the hospital in Charleston, South Carolina who performed the surgery.

“I am reminded that someone like you is the reason I’m living today with God’s help," Nelson said.