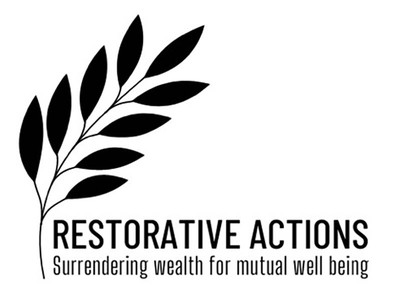 An economic justice initiative inspired by the PC(USA) working to combat racism and racial privilege will be getting support at the 225th General Assembly of the Presbyterian Church (U.S.A.) this summer. The Rev. Gregory Bentley and Ruling Elder Elona Street-Stewart, Co-Moderators of the 224th General Assembly, recommended that the offering taken during opening worship go to Restorative Actions.

Its mission is to encourage those who have benefited from institutional racism to recognize how many benefits are generated directly or indirectly through systemic inequities.

“Restorative Actions is an economic justice mechanism for mid councils, congregations, individuals and interested organizations to examine their assets and determine what portion of their wealth can be attributed to white supremacy,” said Street-Stewart. “It is hoped these interested persons or groups will surrender that portion to private trusts and private charitable trusts to increase opportunities for Indigenous nations and Afro-American individuals and communities in the United States to flourish.”

Street-Stewart says Restorative Actions is a response to “God’s abundant grace that surrenders ill-gotten gains as a symbol of commitment to creating reciprocal relations between people.” She adds that it seeks to answer the question “What can we do?” by providing one avenue to work toward decolonizing wealth and creating parity in the United States.

Bentley often refers to the “seven Rs” when it comes to making right the wrongs against Indigenous and people of color: remembrance, remorse, repentance, repair, reconciliation, resurrection and rejoicing. He adds that the church has enough policy to do the work and now it’s time to “get to the doing.”

“As commissioners gather to do the work of the church, we wish to place a focus on economic justice as a priority for the church and a way for us to apply the transformative gospel of Christ to repair the harm done and commit to real change in the world,” said Bentley. “Convinced by Hebrews 11:1, 'Our faith is the assurance of things hoped for, the conviction of things not seen,' restorative actions like these become the evidence of faithful discipleship on our journey from lament to hope.”

Bentley says it is not enough to wordsmith beautiful statements expressing sorrow over slavery, adding that the church needs to “deal with some discomfort.”

“If we are only concerned about whether it makes someone feel bad, we’ll never do anything worth doing,” he said. “It’s about how to make right a systemic wrong, not just a personal wrong. You can’t only have personal responses to a systemic issue.”

Volunteers with Restorative Actions say the reception to the initiative has been positive and has helped white people acknowledge their responsibility in the racial wealth gap. They also say it is a “spiritual process and requires a set of conversations over a period of time to discern the responsibility and what it means to surrender ill-gotten gains.”

Street-Stewart says people need to surrender the wealth that was unjustly gained by white people who benefited from enslavement and theft of Native land.

“This is not just a novelty or idea of something we can offer,” she said. “This is an issue of history and equity around economic injustice and denial of wealth to those persons that made this church and this country possible, African Americans and Indigenous people.”

“Justice is love with overalls and work boots on. It’s not just syrupy sentimentalism,” said Bentley. “What do we need to flourish and thrive and live into the fullness of who God created us to be?”

Both Street-Stewart and Bentley say opportunities to support Restorative Actions can go beyond the Assembly’s opening worship. Those interested are encouraged to get their churches and presbyteries involved using promotional material and a video that will be available in late spring. Giving information can be found here.

The 225th General Assembly will be a hybrid gathering this year. Opening worship is scheduled for Saturday, June 18, at 11 a.m. Eastern Time. Click here for more information about this year’s Assembly.