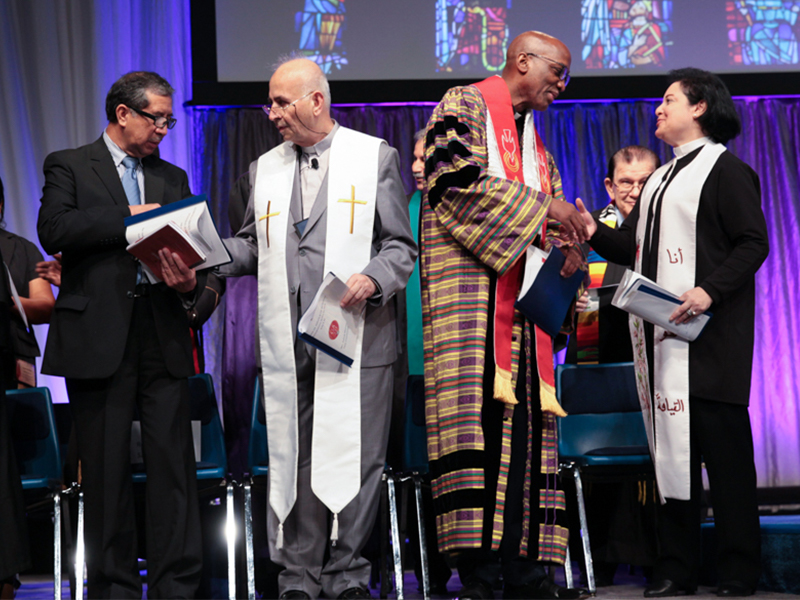 Stated Clerk the Rev. Dr. J. Herbert Nelson, II asks Presbyterians and ecumenical friends to pass the peace in the Ecumenical Service of Worship at the 223rd General Assembly (2018) in St. Louis. Photo by Danny Bolin

Stated Clerk the Rev. Dr. J. Herbert Nelson, IIasks Presbyterians and ecumenical friends to pass the peace in the Ecumenical Service of Worship at the 223rd General Assembly (2018) in St. Louis. Photo by Danny Bolin

The Roman Catholic-Reformed Ecumenical Dialogue in the United States is sharing three important documents from its previous two rounds of dialogue. The releases coincide with the group’s preparations for a new round of dialogue in the spring.

The documents relate to the group’s ongoing ecumenical discussions about baptism, the Lord’s Supper/Eucharist and authority in the Church. Links to each document, and the years each was worked on, follow:

Of particular note, “These Living Waters” resulted in a “Common Agreement on Mutual Recognition of Baptism,” that Reformed Christians and Catholics recognize one another’s validly administered baptisms.

The Presbyterian Church (U.S.A.) joined that agreement in 2010.

The U.S. Conference of Catholic Bishops, through its Committee for Ecumenical and Interreligious Affairs, participates in the Roman Catholic-Reformed Ecumenical Dialogue along with the Presbyterian Church (U.S.A.), the Reformed Church in America, the United Church of Christ and the Christian Reformed Church in North America. The first round of dialogue began soon after the Second Vatican Council (1962-65), which prepared the way for ecumenical discussions.

According to a press release from the staff team of the Roman Catholic-Reformed Ecumenical Dialogue announcing the shared documents, a new round of discussion on the topic of justification and justice will begin in Chicago in 2022.

Dr. Dianna Wright, Director of Ecumenical Relations in the Office of the General Assembly, said there will be an initial meeting March 30 and then a three-day gathering later in the spring.

“This dialogue has been on a long journey to this current conversation around justice,” said Wright. She added that the work “fits well with our Matthew 25 call for justice in all aspects of the church’s life and witness.

“I hope our conversation will help us discern what mutual recognition of our ministries means for the work and witness of the church in today’s often unsettling and divisive contexts,” Wright said.

Two members of the previous two rounds of dialogue, Fr. Dennis Tamburello of Siena College in Loudonville, New York, and Dr. Ronald J. Feenstra of Calvin Theological Seminary in Grand Rapids, Michigan, are preparing a study guide based on the documents from those rounds. Tentatively titled “Learning from One Another: A Study Guide for Reformed-Roman Catholic Dialogue,” the document is intended for use in local ecumenical discussions.