Have a recent story of ecumenical or interreligious cooperation to share with GACEIR? Please email me.
— Dr. Dianna Wright, GACEIR staff member 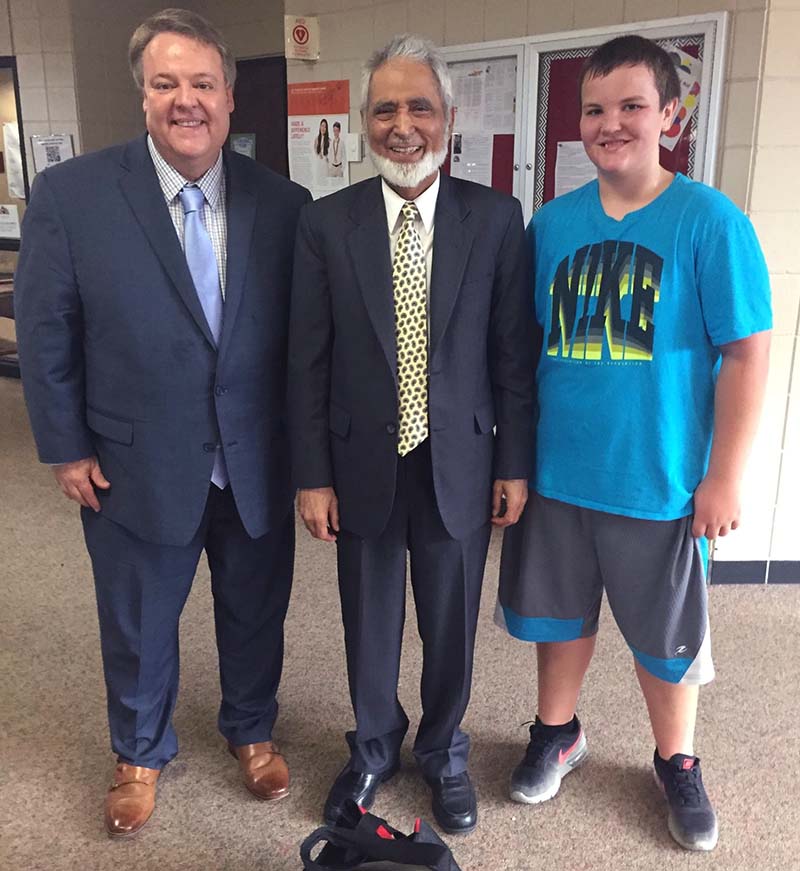 In Redwood Falls, Minnesota, where the Rev. Scott Prouty is pastor of First Presbyterian Church, there are 5,200 residents. Few if any are Muslim.

So when Prouty, a member of the General Assembly’s Committee on Ecumenical and Interreligious Relations, found himself calling the Islamic Society of North America in 2016 as part of a reference check, he had no idea how the conversation would go.

“I’d never met a Muslim,” Prouty said. “And in the community I live in, I’d mostly heard about Muslims being bad people.”

This wasn’t any standard reference check. Prouty, who in 2016 was a member of the Stated Clerk Nominating Committee, was calling about the interfaith bona fides of one applicant: the Rev. Dr. J. Herbert Nelson, II.

You might know how that part of the story ended. Nelson was nominated and during the last day of the 223rd General Assembly in Portland elected to lead the Presbyterian Church (U.S.A.). But Prouty’s tale of interreligious cooperation was just beginning.

The person he spoke to for the reference check was Dr. Sayyid M. Syeed, the former National Director of ISNA’s Office of Interfaith and Community Alliances in Washington, D.C.

“He was so charming and a wonderful conversationalist,” Prouty said.

Syeed ended up inviting Prouty to a three-day interfaith forum in Washington, D.C. in April 2016. During a press conference, Prouty delivered remarks on behalf of the PC(USA) denouncing hatred toward Muslims. Later in the visit he met with Obama administration advisors and attended a reception hosted by Senator Orrin Hatch of Utah.

Before leaving Minnesota, Prouty had invited Syeed to Redwood Falls. “I asked him, 'do you ever travel to small towns?'”

To his surprise, the world-recognized faith leader agreed to visit.

“Dr. Syeed grew up in Kashmir,” Prouty said. “He’s worked with eight presidents and three popes and is a peace leader of Muslims around the world. As a child he met Gandhi, who told him God would do great things through him.”

Syeed spent four days in Redwood Falls in October 2016, as reported by Duane Sweep for the Presbyterian News Service. Prouty worked with the local school system and others in the community to arrange speaking engagements. But not everyone supported the visit.

Prouty met with the school board to deny rumors that Syeed was a terrorist. During a meeting of the town’s 12 Christian ministers, the Presbyterian pastor found himself defending his own theology.

Neither Syeed nor Prouty was deterred. In appearances at a community center, local schools and the Presbytery of Minnesota Valleys, and during radio and television broadcasts, Syeed spoke of all that unites Christians, Muslims and Jews — much more than what divides them.

At one school appearance he spoke about “Muslims’ love of Jesus in a way Christians leaders would not have dared,” Prouty said.  “By the end of the visit kids who had been accusing him of terrorism were giving him hugs.”

The visit strengthened Prouty’s friendship with Syeed, and served as a foundation for his support of Muslim Americans, which continues to this day through GACEIR.

“Since 2016 I’ve attended six annual ISNA national conferences, the last two virtual,” Prouty said. “At the conferences I’m one of the very few Christians in a group of 10,000 or 20,000 Muslims. The people at the conference are amazed that I’m there and that I care.”

In 2018, Prouty worked with former director of Ecumenical Relations in the Office of the General Assembly, the Rev. Robina Winbush, to invite a Muslim cleric to GA223 in St. Louis.

To this day, Syeed’s visit inspires the Synod of Lakes and Prairies' outreach program to Muslims. “Each year at Synod School people talk to me about Dr. Syeed,” Prouty said. “They ask, ‘When is he going to come back?’”

In Redwood Falls, a school principal recently asked him, “When are we going to make that happen again?”

Despite needing to defend his theology in 2016, Prouty still meets regularly with the other Christian leaders of Redwood Falls. He is currently the ministerial association's secretary/treasurer.

“We are called to do ecumenical work as well as interreligious work,” he said. “And sometimes they clash.”

In Minnesota and beyond, Prouty thinks bringing people together can start with a phone call or email.

“My dream is for communities such as mine where there isn’t much diversity to invite leaders of another faith into the community and give them a chance to speak," Prouty said. “If you don’t see people, they don’t exist. If you dine with someone, if you share your life with someone, that person becomes real.”

As for the Rev. Dr. J. Herbert Nelson, II, Stated Clerk of the General Assembly of the PC(USA), whose reference check began Prouty’s tale of friendship with Syeed, he gets the last words to this story.

About the public attention given to Syeed’s visit to Redwood Falls in 2016, Prouty joked to the Stated Clerk, ‘Look what you got us into!’”