Home News A picture is worth a thousand words

A picture is worth a thousand words

Photos of the Religious News Service

Executive Director Nancy J. Taylor, Director of Programs and Services Natalie Shilstut and Digital Collections Specialist Allison Davis spoke about their experiences working on the National Endowment for the Humanities-funded Religious News Service Photographs Digitization Pilot Project before turning the conversation over to Doyle to discuss the current work of the Religion News Service, the current iteration of the RNS.

Watch the full session below.

The RNS collection at the PHS

Taylor opened the session by providing context for the archival collection of RNS materials held at the PHS. The RNS collection was entrusted to the PHS in 1984, when the National Council of Christians and Jews (NCCJ) transferred ownership of the RNS to the United Methodist Reporter and, simultaneously, decided to gift the collections to the PHS for preservation.

The PHS welcomed 621 cubic-foot boxes of material from the NCCJ in 1984. In addition to over 60,000 photographs, the RNS collection also included press clippings, subject files and other textual materials that document the coverage of five decades of religious news across the globe.

The historical context of the RNS itself traces back to 1934, when the NCCJ spearheaded one of the first efforts to disseminate depictions of religious life to a wider, nondenominational-focused audience. The RNS was thus created, with the focus of providing reliable and bias-free religious news that looked at the gamut of religious experiences across the globe. The photo service branch of the RNS began a decade after the origins of the news service, in 1945, during the peak of World War II.

At its inception, the primary focus of coverage of the RNS photo service was the impact of the war across the globe. Images of refugees, the destruction of church buildings, and the reverberations of war in Europe and East Asia feature prominently in the collected photos from the early years of the RNS. The collection covers five decades of news coverage, from 1945 to 1982. There are images of war, social justice movements, protests and more, as well as photos of traditional religious news, including coverage of conferences and the careers of religious leaders. 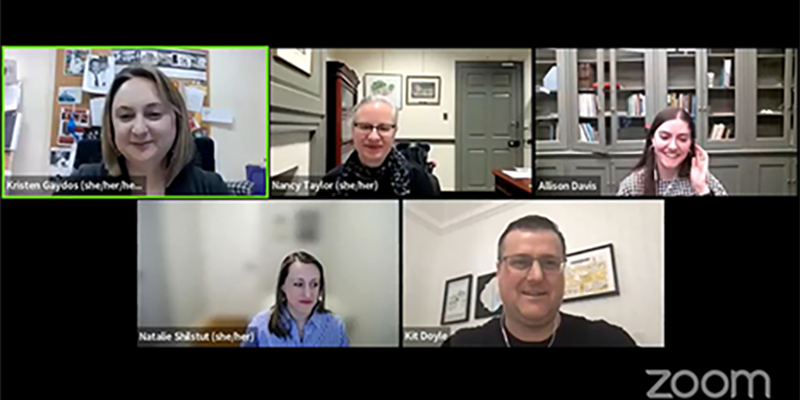 The RNS-focused, grant-funded digitization project began in 2018. While appraising the mass of materials, PHS staff quickly realized that they would need assistance in tackling the documentation, preservation and digitization of the collection. The PHS was awarded a $44,000 Humanities Collections and Reference Resources Grant from the National Endowment for the Humanities for this purpose, allowing them access to the funds, subject matter experts, resources and knowledge that they needed to better handle and protect the historical materials at their fingertips. The PHS organized an advisory panel that helped them tackle the questions of intellectual property, copyright, how to handle damaged and deteriorating materials, and how much of the collection they could make accessible to researchers.

With a collection so large, it would be virtually impossible to commit to digitizing every image. Shilstut explained that staff, with the help of the advisory panel, implemented a three-tier, five-point rating system to prioritize images for digitization, preservation and access. It was decided that PHS staff members would work with five boxes of collection materials — one box from each decade of the collection. Further, they would scan and digitize the 500 top-rated images as part of the pilot digitization project. The three criteria of the rating system were physical condition, documentation quality and historical significance.

Shilstut and Taylor were the two staff members involved in the appraisal and rating process. Images that were at risk for deterioration were prioritized for preservation. Documentation quality was a judgment of the amount of information available inside the photo files, and whether that provided adequate historical context to interpret the images. After discussing with the advisory panel how to objectively quantify the historical significance of an image, the group decided upon three characteristics that, if all were found in any one image, would rate that image a 4 out of 5. Those three factors were an element of action, more than one quality story being told by the image, and the portrayal of an underrepresented religious group. To score a 5 overall, the image would need all three aspects described above, as well as a high aesthetic or composition quality.

Highlights from the collection and RNS photo parallels

Davis then took the floor to share selected digitized photos of the RNS collection. Davis explained that the project’s scanning and digitization was done on site; Davis herself was one of the two PHS staff members who worked on scanning the photographs, transcribing the captions and uploading the files to the organization’s digital repository, Pearl. Among the wealth of information in the collection, which ranged from faith-based groups and denominational structures to larger political, cultural and social issues, Davis pointed out that “no congregation was too small to be highlighted by the RNS.” 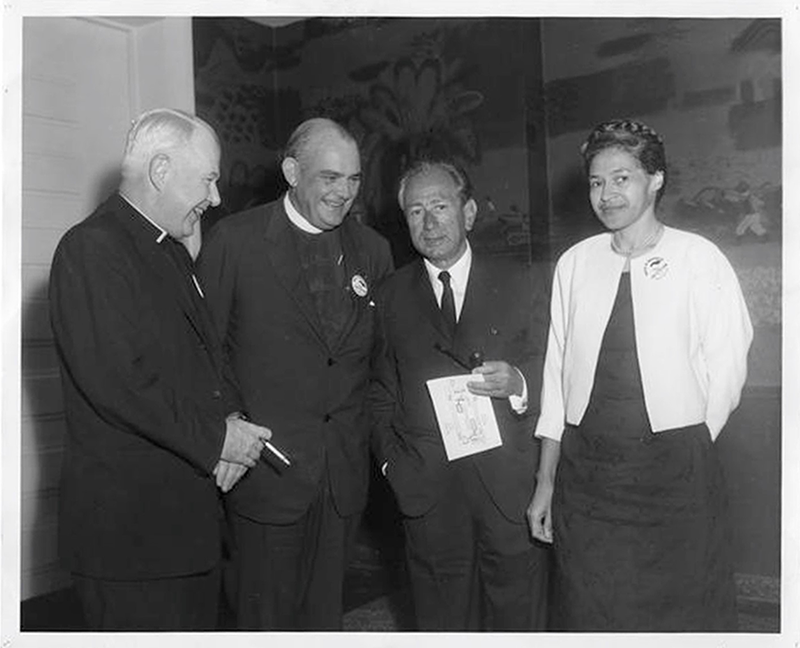 Doyle reiterated the historical background of the news service. Doyle emphasized that the organization strives to inform, illuminate and inspire public discourse on matters relating to beliefs and convictions. The Religion News Service is not affiliated with a particular denomination or religion, but rather offers a wide scope of content. Doyle’s presentation consisted of several slides that offered archival photos set beside contemporary images that depicted thematic parallels, a method of comparative storytelling often utilized by RNS journalists. An image of the Notre Dame cathedral taken in the mid-20th century was juxtaposed with a photograph taken in 2019, when the turrets of the historic church had been decimated by fire. A 1946 photograph of a Georgia preacher holding a rattlesnake in front of his congregation was paralleled with an eerily similar image taken in Tennessee in 2013. A black-and-white photo of Pope Paul VI speaking against nuclear war in 1965 was paralleled with an image taken just last month of Pope Francis speaking against the Russian invasion of Ukraine. Photos from abortion rights protests from 1971 and from 2022 were shared side by side, as were images from anti-abortion demonstrations from the same dates, reiterating that the Religion News Service covers both sides of every event.

Next steps for the RNS Collection

The “PHS Live” panel spent the last few minutes of the session answering questions from the audience. Davis answered a query about the nature of handling the more violent images in the collection, particularly of wartime, explaining that PHS staff were forced to reconsider how to display graphic images in the digital repository. “We have hidden the [more violent] images in the thumbnails for search results, but the description is still available,” Davis said. That way, the average viewer does not accidentally stumble upon the more graphic images found in the collection.

When asked about the preservation and processing of the remainder of the collection, Taylor noted that the PHS’s current plan includes applying to additional grants in order to expand upon the pilot digitization project. “We’re so happy that we have developed a close relationship with Religion News Service,” Taylor said. “We need to be able to bring these images to a much wider audience. … It’s been very gratifying for us, and we really do want to continue to expand that.”