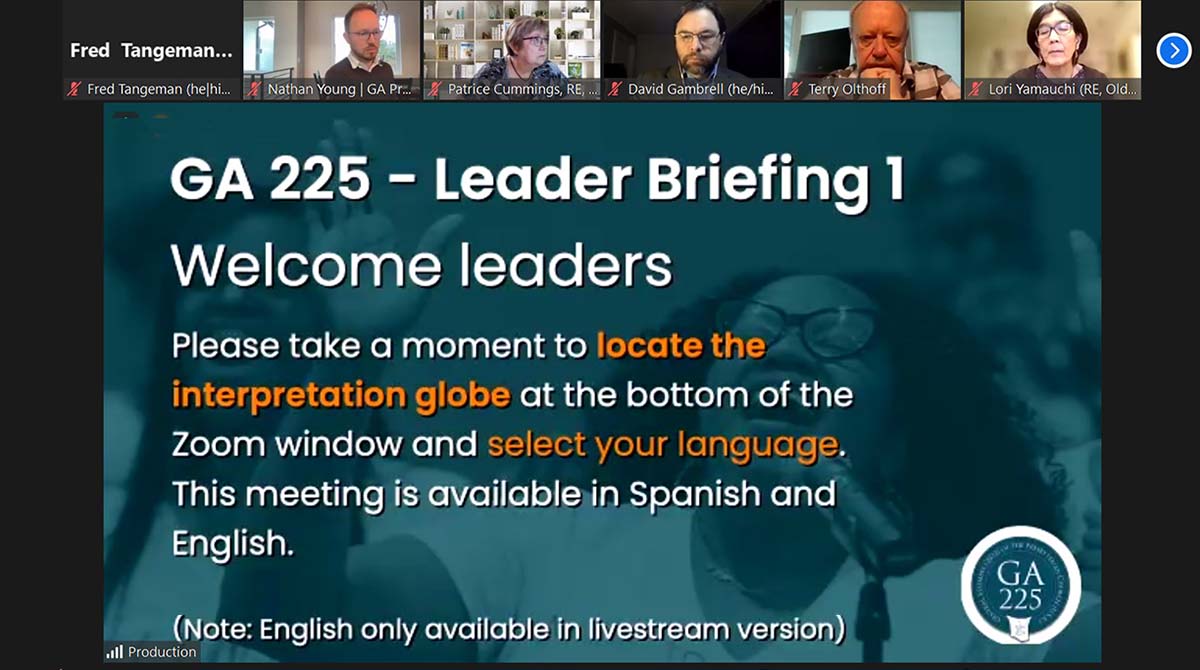 The first session of Leader Briefing for the 225th General Assembly was held online March 15-16.

Also attending the online Zoom sessions were parliamentarians, transcriptionists, committee assistants and resource coordinators for each of Assembly’s 17 committees. The briefing finished Wednesday with moderators and vice moderators taking their first votes as members of the Assembly Committee on Business Referral.

This was the first of three rounds of Leadership Briefing, with a second scheduled for May 3-4 and a third for June 18, the first morning of the Assembly. Moderators and vice moderators not yet in Louisville for their three-day committee assignments on June 18 will attend the last leader briefing online.

Julia Henderson, Leader for GA Planning and Business Management in the Office of the General Assembly (OGA), said that committee leaders will finalize their committee agendas by the end of the second Leader Briefing in May. Prior to that they will begin meeting with their full committees, which can include up to 40 people, over Zoom.

In preparation for this summer’s hybrid assembly, Leader Briefing 1 presentations focused on digital and in-person tools for managing and inspiring committee work, including tracking committee business through PC-Biz and the commissioner portal of the new-for-GA 225 website MyGA.

Nathan Young, GA 225 producer, compared MyGA to a guidebook for the Assembly and showed committee leaders how to use it to access PC-Biz and other Assembly links. He gave special thanks to Vicente Guna, Associate Director for Technologies in OGA, for launching MyGA and continuing to grow PC-Biz, a system that has been used “for 15 years to track and carry out Assembly business,” Young said. He held several Q&A rounds throughout Tuesday and Wednesday alongside Henderson, Guna, and OGA Program Assistant Jayne Culp to answer technology questions from committee leaders.

Like PC-Biz, Leader Briefing itself has changed to adjust to the hybrid Assembly. In an email to the news service, Henderson explained that an additional and earlier Leader Briefing round was added to the schedule for GA 225.

“We hope this early work at building community leads to improved discernment when the committees are together in Louisville," Henderson said.

Henderson said that GA organizers are using technology “to invite and expand participation from those in our denomination who could not normally be present in a convention center setting.”

One way that is happening is a modified process for collecting public hearing testimonies that the Rev. Dr. Tim Cargal, Manager for Ministry Preparation & Support in OGA, presented about Tuesday afternoon. “A simple app will allow people to share their thoughts on an item of business without the time and expense associated with travel,” Henderson said. “We hope to provide commissioners and advisory delegates with a range of diverse perspectives on issues before their committee.”

The Rev. Dr. Tim Cargal, manager for Ministry Preparation & Support in the Office of the General Assembly, discussed the public hearing process for committees.

Deputy Stated Clerk Kerry Rice led a session on building community inside committees. As with other presentations, the community building slides and public hearings process slides were made available to leaders via MyGA soon after their initial sharing on Zoom.

“Make sure you have a mix of strategies to meet the needs of your committee members,” Rice said before advising leaders to identify interpretation service needs and any disability issues early in the team-building process.

Rice said that Assembly staff is “here to help you succeed. Please let us know what we can do to help.”

Throughout the two days, committee leaders shared their own ideas for team building — during break-out sessions, the main Zoom meetings and Zoom chat. Among those ideas were extending “neutral” invitations for sharing to committee members, encouraging committee members to tell their individual stories about GA or lives outside the Assembly and imagination exercises. Involving introverts and extroverts in dialogue is a key part of team cohesion.

To build community among the new committee moderators and vice moderators, Leader Briefing attendees were welcomed Tuesday by denominational leaders, including the Co-Moderators of the 224th General Assembly, Ruling Elder Elona Street-Stewart and the Rev. Gregory Bentley; Stated Clerk of the General Assembly of the PC(USA) the Rev. Dr. J. Herbert Nelson, II; and President and Executive Director of the Presbyterian Mission Agency (PMA), the Rev. Dr. Diane Moffett. A worship service led by the Rev. Dr. David Gambrell, Associate for Worship in the Office of Theology and Worship in PMA, began the two-day meeting.

Street-Stewart said that committee leaders “have the ability to restore the things that have been broken inside the church, and to restore voices. Thank you for responding to our invitation.”

“I am delighted that you have demonstrated a willingness to be here with us,” Bentley said. “You have stepped up to the plate.”

Nelson added his encouragement and gave thanks to the innovative work church staff has done during the last two assemblies in the midst of COVID-19. He said other denominations have taken note of what the PC(USA) is doing, especially around creating virtual and hybrid meeting spaces.

“Presbyterians have always been resilient,” Nelson said. “We’ve always been leaders. We are out in front now …. Don’t throw away your computers, because Zoom is not going away.

“I want you to get excited, to love what is going to happen at the Assembly, and then afterward to tell the story of what the Lord is allowing us to do.”

DeAmber Clopton, associate director of Finance Administration for OGA, discussed financial implication and how they are factored in the work of Assembly committees.

Other national church staff presentations at Leader Briefing I focused on denominational and Assembly updates.

Ruling Elder Kathy Lueckert, President of the Presbyterian Church (U.S.A.), A Corporation, discussed how A Corp’s Administrative Services Group is working on changes to the Presbyterian Center that will help accommodate the staggered committee meetings, offering language hospitality through Global Language Services, assisting with COVID safety measures and providing “lots and lots of coffee.” Lueckert said that the deadline for completing the renovation is May 1.

DeAmber Clopton, Associate Director of Finance Administration in OGA, explained how financial implications are factored into the work of Assembly committees and decisions of the full GA, which this year will include a General Assembly committee on financial resources.

Multiple committee leaders asked for clarification about how finances are monitored and how that information will be shared during the Assembly. Rice recommended recent reports by the Per Capita and Financial Sustainability special committees as good places to start learning more about overall church finances and stewardship.

Deb Davies, Manager for Meeting Services in OGA, gave an overview of the rooms set up for the three-day meetings in the Presbyterian Center. Meetings — like meal times and other breaks — will be staggered to minimize the number of people in shared spaces at one time.

She said there will be limited seating in each committee room, even for designated resource people. Overture advocates and observers will participate in committees virtually.

“In light of COVID, health and safety is on everyone’s mind,” Davies said before specifying other measures being taken during this summer’s in-person gatherings, including single hotel rooms for commissioners and advisory delegates and vaccine and mask mandates for anyone entering the Presbyterian Center.

Deb Davies is manager for Meeting Services in OGA..

As Henderson explained to the news service, committee leaders not only oversee the business of their committee; each moderator and vice moderator is also a member of the Assembly Committee on Business Referral.

That committee “meets ahead of General Assembly to refer business to GA committees, approve the GA docket, and approve any special rules necessary to operate their committee in an online setting,” she said.

That work, which began on Wednesday with moderators and vice moderators using their newly acquired skills in MyGA and PC-Biz to cast votes, ended the last day of Leader Briefing 1.

According to a Wednesday email from Rice, the committee leaders referred and approved the items Henderson mentions above, and also approved a 120-second limit for speakers during public hearings.

Learn more about Leader Briefing at the GA 225 website.

Stated Clerk Nelson spelled out his vision for the denomination’s first hybrid assembly in a recent article for “Presbyterians Today.”