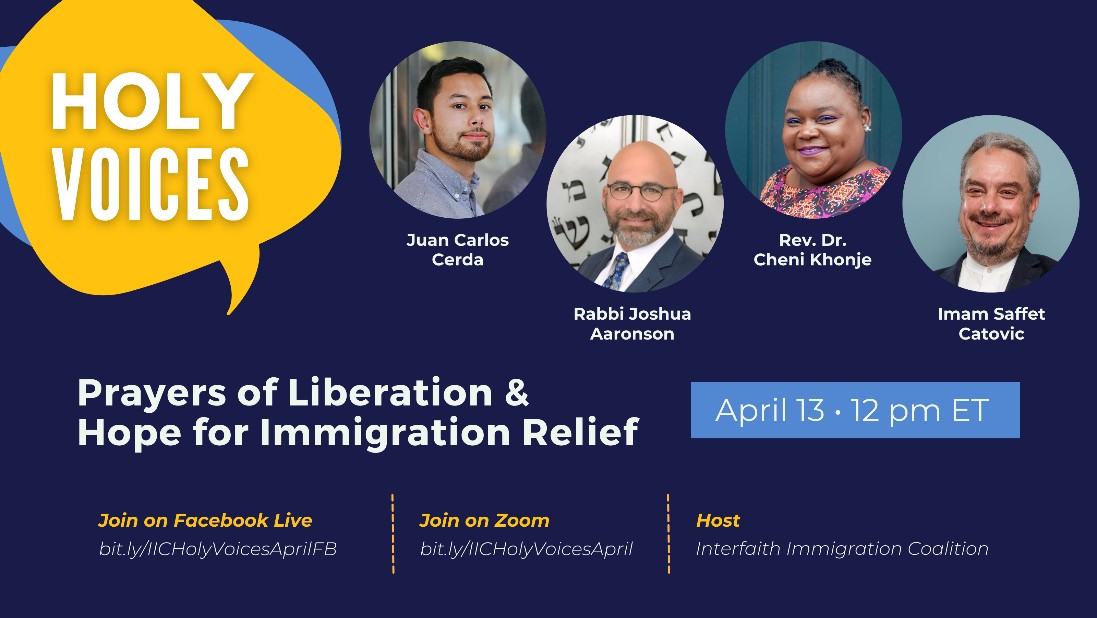 As Ramadan, Passover and Easter converged last week, faith leaders from the Interfaith Immigration Coalition met over Zoom and Facebook Live. Their goal was to “channel the liberatory spirits of these holy days into our fight for citizenship,” in the words of the event description.

During the lunchtime gathering, a rabbi, imam, Roman Catholic DACA (Deferred Action for Childhood Arrivals) recipient and Presbyterian pastor shared personal reflections about immigration and discussed the need to continue working toward immigration relief through pathways to citizenship this spring.

They discussed the call to support immigrants found in all their faiths, how new trends of migration are impacting the current immigration system and the importance of remaining hopeful about relief in all seasons. You can watch the full recording here.

Amanda Craft, Manager of Advocacy for the Office of the General Assembly’s Office of Immigration Issues, noted in an email that the PC(USA) is a steering committee member of the Interfaith Immigration Coalition. Craft helped plan the event.

“Advocating alongside immigrants for pathways to citizenship has been part of PC(USA) policy for decades,” Craft wrote. “Even when these efforts face setbacks, we understand that our faith traditions guide us in hope. As Christians celebrate Easter, we celebrate the ultimate promise of hope and are invited into being part of that hope.”

Elizabeth Corsig, a Young Adult Volunteer with the Presbyterian Mission Agency’s Office of Public Witness, moderated the discussion and introduced the interfaith speakers, saying this time on the calendar features “themes of hope and renewal being shared by many faiths. Today we gather strength from each other.” 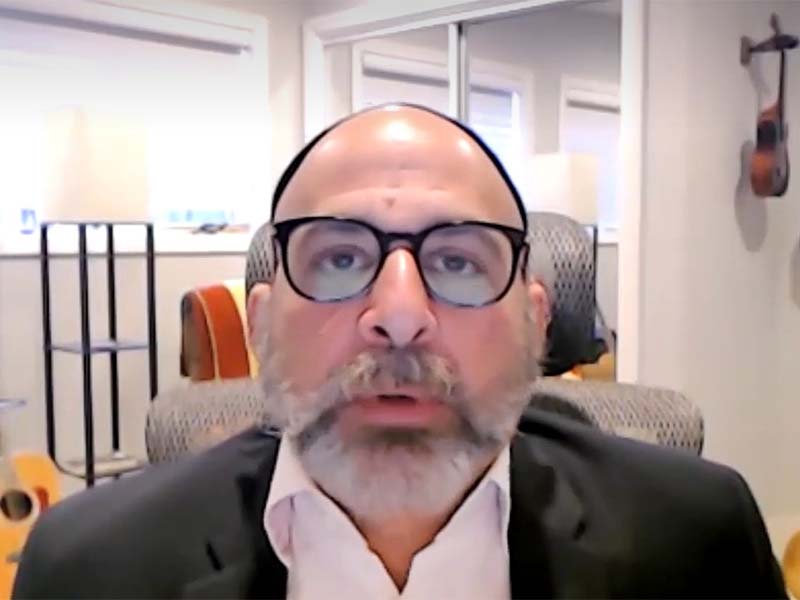 After an opening prayer by the Rev. Dr. Cheni Khonje, Rabbi Joshua Aaronson, Senior Rabbi at Temple Judea in Tarzana, California, said that Passover is “the founding story of the Jewish people.” In that story, “We were strangers in the land of Egypt.”

The Exodus narrative, together with the lived experience of Jewish people around the world into the 21st century, “makes us extraordinarily concerned with the notion of strangers in our midst. Every Jew who lives in USA was an immigrant at one time.”

History serves as a “call to action” for Jewish people to help migrants, Aaronson said, whatever their documentation status. Toward that end his synagogue participates in a community program that has sponsored over 800 people to become citizens.

Imam Saffet Catovic, Director of the Islamic Society of North America Office for Interfaith and Community Alliances in Washington, D.C., said that that a popular metaphor in the Islamic tradition has it that Ramadan “comes as a guest.”

“We are all guests here except for Native peoples,” he said. “We are all immigrants, whether enslaved or if we came here seeking economic opportunities or religious freedom.”

Catovic noted the importance of migration in the Koran, and how the Islamic calendar marks the movement of the Prophet Muhammad from Mecca to today’s Medina. 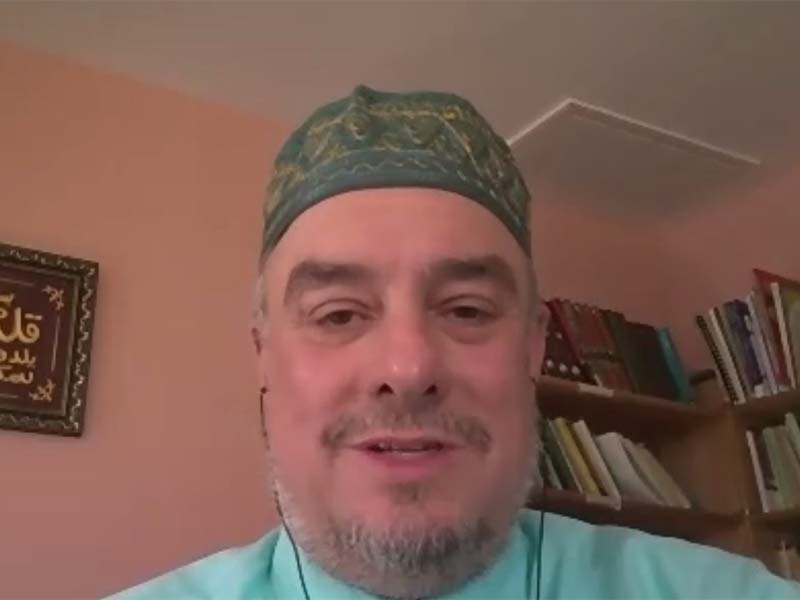 In the United States there are currently 11 million migrant “brothers and sisters who are working hard but don’t necessarily have their papers in order.”

“Every Muslim is asked to pay for the support of the poor,” he added. “The stranger today is our brother or sister tomorrow.”

Juan Carlos Cerda, a DACA recipient who is Deputy Campaign Director for the American Business Immigration Coalition and a member of the Bishop’s Immigration Task Force for the Catholic Diocese of Dallas, Texas, gave personal testimony about the plight of undocumented immigrants.

Born in Mexico, Cerda came to the United States at age 7 “because my parents wanted a better future for us.”

“I grew up knowing I was undocumented,” he said. Whenever his family came into contact with law enforcement, he felt “nervous about being sent back.”

Cerda gave thanks to the work of previous immigrant rights advocates who made it possible for him to receive DACA status in 2012. Years later, he “was woken up in his faith” by the need to respond to anti-immigrant laws such as SB 4 in Texas.

“My parents were undocumented for two decades until recently, when they became documented,” he said. They journeyed to Our Lady of Guadalupe in Mexico City to give thanks to God for their status change. 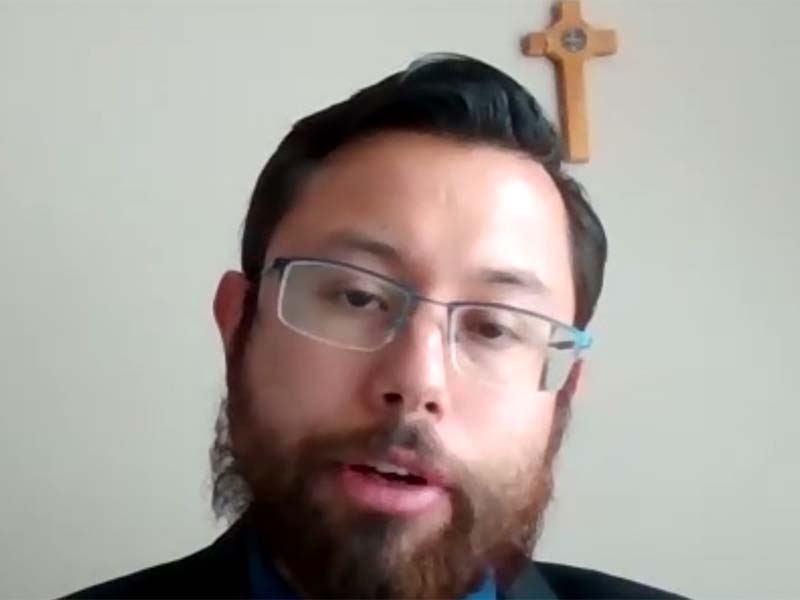 Khonje, a former refugee from Malawi, is associate pastor at Georgetown Presbyterian Church in Washington, D.C. She spoke about her family’s migration saga from Africa to Europe to the United States.

“As refugees everywhere we went we were marked as people who did not belong,” she said.

Only recently, after a 17-year struggle in and out of court, “a judge in New Jersey decided ‘this is enough for this family … they need to become citizens.’”

Khonje said it is important to celebrate Easter as a life-changing moment.

“It is a time when Christians are dead to sin and alive to God in Christ Jesus," Khonje said. “With this new way of life we are able to move forward with siblings of different faiths to work on things that are important to God.”

Echoing previous speakers, Khonje pointed to the biblical instruction “to treat new arrivals in our land as citizens … to treat them equally.” That includes providing equal access to jobs and the legal system.

Without the full participation of new immigrants, “Our lives are less than complete,” she said. 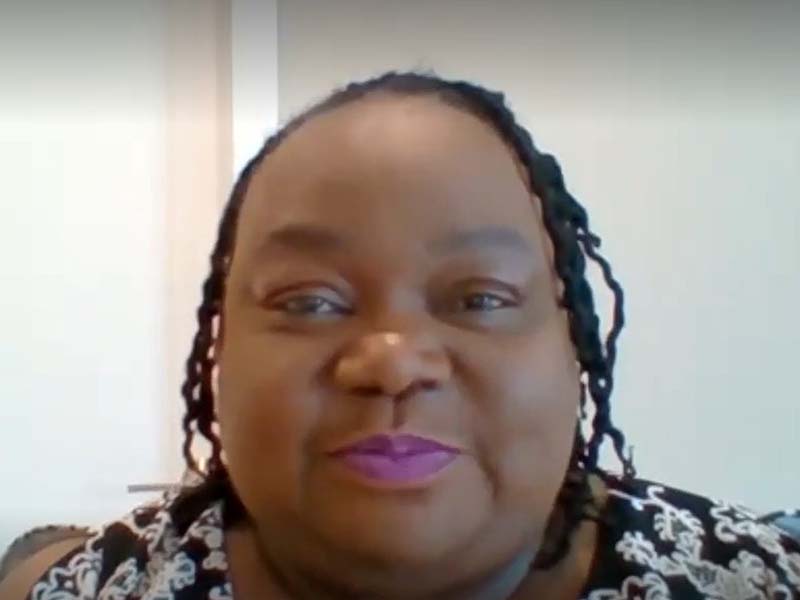 Catovic, during his initial remarks and in the Q&A near the end of the session, discussed the recent influx of Ukrainian migrants, which is creating further stress on the already slow federal system of processing migrants and refugees.

“There is racial and country of origin disparity in the way we treat migrants,” he said.

“We’re calling on the Biden administration to step up its game” and “to honor its commitments” to all migrant communities.

One audience member asked Cerda how long it takes DACA petitioners to hear back from the government. DACA renewals are commonly taking between 3 and 6 months, he said, with other documentation petitions taking decades to resolve.

Whichever presidential administration is in power, “there are always delays,” he said. “DACA is a temporary measure … We need comprehensive reform.” That need is even more pressing now because of increasing migration from Central America.

Aaronson answered a question about remaining hopeful despite the slow pace of immigration reform.

“All of our faith traditions call on us to continue the fight,” he said. “We need to take solace in the small gains we’ve achieved.” Later he noted that a move away from the overall rightward political climate in the country would help bring about improvements for all marginalized communities, including migrants.

Rachel Klein, who works on immigration justice issues at the Religious Action Center of Reform Judaism, ended the gathering with a call to action for audience members, sharing a link to the Interfaith Immigration Coalition’s “Springing Into Action” toolkit, which includes “5 Ways to Continue Taking Action for Citizenship.”

You can learn more about PC(USA) assistance to immigrants at the following links: