'Addressing Violence in the USA' committee to examine links between guns, inequality, advocacy 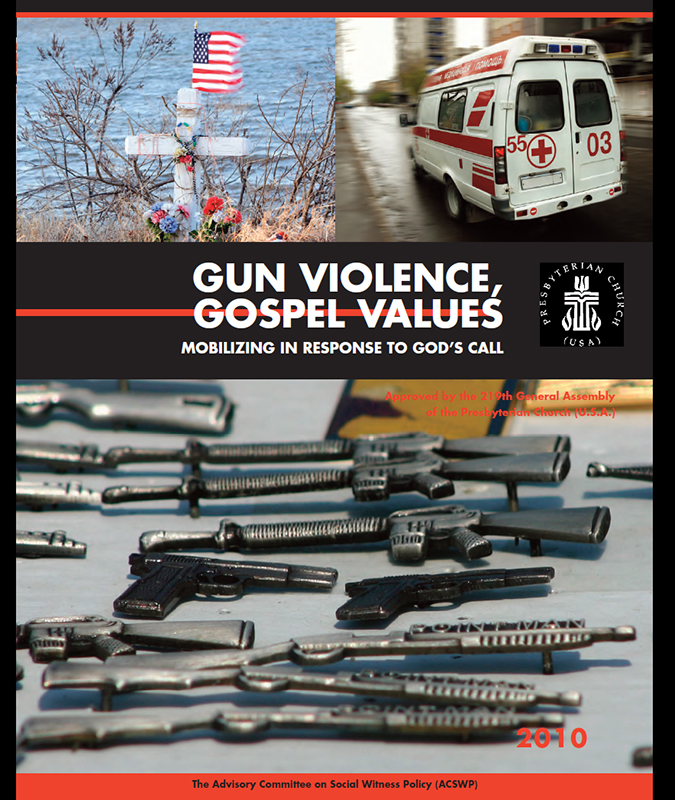 In a nation where guns are now the major cause of death for young people, it follows that gun violence deterrence would top the agenda of the Addressing Violence in the U.S. Committee at this summer’s 225th General Assembly.

Even the committee’s creation shows the unprecedented level of concern about gun violence throughout the church.

“It was clear from the number of items presbyteries, synods and others submitted that this was a focus around which a single committee could gather,” said Kate T. Duffert, Manager for GA Business in the Office of the General Assembly.

At least four of the committee’s overtures and reports build on past PC(USA) advocacy work, including campaigns to solidify denominational policies and create education and advocacy resources. An overture from Chicago Presbytery to GA224 (VIOL-01) focusing on the link between “the sinful, historical intersection between guns and race” was referred to this Assembly.

Like other items before the committee, including the report and recommendations of the Assembly’s standing Advisory Committee on Social Witness Policy (ACSWP), the Chicago Presbytery overture shows that gun violence has worsened in the last ten years despite efforts from inside and outside the church.

Even items before the committee focusing on polarization and bullying speak to the conditions of American life where the easy availability of guns can prove deadly.

No community has been spared the toll of gun violence, including deaths by suicide (the main cause of gun fatalities), murder or accident. In many years, The New York Times reports, more preschoolers are killed by guns than police officers.

In a single 24 hours in May, the Tops Supermarket shooting in East Buffalo and the shooting at California’s Irvine Taiwanese Presbyterian Church in Laguna Hills saw sites of immigrant and Black life singled out for slaughter. The killing of 19 children and two adults in Uvalde, Texas is the highest death toll for a school shooting since Sandy Hook, 10 years ago.

The Rev. Carl Horton, Mission Coordinator of the Presbyterian Mission Agency’s Presbyterian Peacemaking Program (PPP) and Interim Coordinator of ACSWP, spoke to the news service about ACSWP’s Gun Violence Report and Recommendations to GA225 (VIOL-07) and how they build on work from 2010, when the 219th General Assembly unanimously passed the Social Witness Policy statement, “Gun Violence, Gospel Values: Mobilizing in Response to God’s Call.”

A decade has passed since that policy. Now, ACSWP is calling for a “Decade to End Gun Violence.” 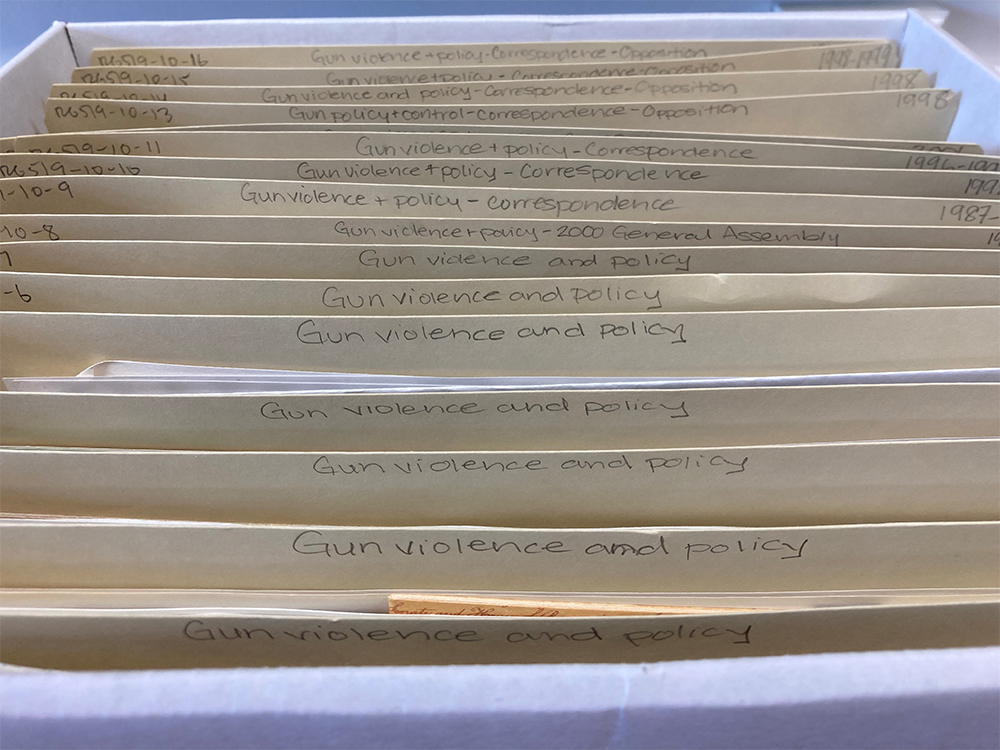 “ACSWP determined it was time to update ‘Gospel Values, Gun Violence’ as part of its blue-sky process, casting a broad net about issues the church hasn’t spoken to recently or needs to revisit,” Horton said. The resolution includes updated statistics as a part of the rationale of VIOL-07.

Horton said that ACSWP is calling for a “Decade to End Gun Violence” to make it easier for congregations, mid councils and the national church to galvanize advocacy for gun violence reforms.

“‘Gun Violence, Gospel Values’ has been a great resource toward that end,” Horton said, containing one church policy that groups can reflect on in their own communities. “Standing Our Holy Ground,” a web series with 12 episodes highlighting different perspectives on gun violence, is another popular resource.

The ACSWP report points to links between gun violence and racism, pandemic crime, violence toward women, the rise of ghost guns and stand-your-ground laws. The recommendations call for a sequel to Presbyterian Disaster Assistance’s 2012 documentary by filmmaker David Barnhart, “Trigger: The Ripple Effect of Gun Violence,” and an accompanying study guide — another media resources that Presbyterians can use to understand gun violence in the 2020s and focus on what Horton called “teachable moments.”

The recommendations also direct continued advocacy from national church offices including the Office of Public Witness, and connecting gun violence awareness with existing church initiatives such as Hands & Feet and Matthew 25.

“Gun violence is a deeply systemic problem that connects to the Matthew 25 emphases of poverty, racism and congregational vitality,” Horton said.

"When congregations are considering active shooter drills, or locking church doors ... the church needs to speak to gun violence and its connection to communities.”

For mid councils, the ASCSWP report commends “the gun violence policies of the Presbytery of Detroit and the Presbytery of Transylvania,” two approaches that relate to ACSWP policy statements (notably the Gospel of Detroit in 2014 and Lazarus is Walking in Baltimore in 2020) and show different communities engaging in advocacy appropriate to their contexts.

Horton said the church needs to look with renewed focus at how gun manufacturing in the U.S. contributes to the problem of gun violence and the overall rise of militarism around the world.

“We are in a violent time,” he said. “Covid has exacerbated the gun violence problem everywhere.” 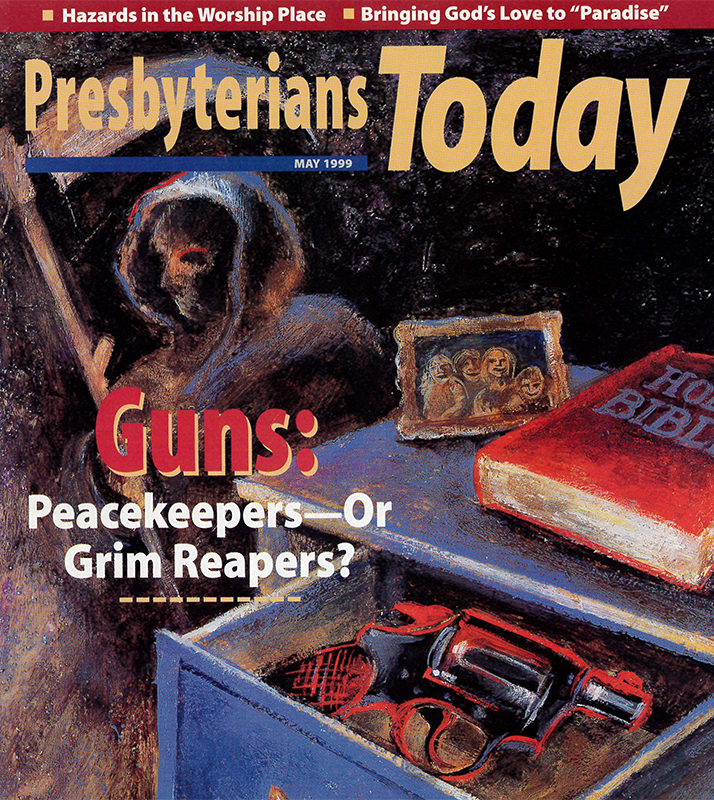 Bryan Miller is a Presbyterian who worked on the original “Gospel Values, Gun Violence” report in 2010 and the recent statistical updates. He leads an anti-gun violence group in Philadelphia called Heeding God’s Call to End Gun Violence.

Miller credited Rev. Jim Atwood, an author and leading advocate on gun violence in the PC(USA), for “getting people excited about the issue in 2008 and 2009.” In 2010, Miller, then leader of CeaseFireNJ, served as chair for the Assembly task force and committee that presented the “Gospel Values, Gun Violence” report to plenary.

“We expected push back but didn’t get any,” Miller said. The report passed by acclimation.

Miller credited much of the work updating the “Gospel Values, Gun Violence” statistics in time for GA225 to another 2010 report contributor, Katie Day, Charles A. Schieren Professor Emerita of Church and Society at United Lutheran Seminary in Philadelphia. ACSWP member the Rev. Sue Trigger, co-pastor of Grace Covenant Presbyterian Church in Overland Park, Kansas; the Rev. Deanna Hollas, Gun Violence Ministry Coordinator for Presbyterian Peace Fellowship; and the Rev. Margery Rossi, pastor of First Presbyterian Church, Wappingers Falls, New York, were among the others who updated the report.

“Deanna said that ‘Gospel Values, Gun Violence’ wasn’t strong enough in its recommendations, and I agree with that,” Miller said.

In updating the report, the group “tried to carefully consider equality with gender and race.”

“We sometimes speak of the connections between gun violence and racism,” Miller said. “But gun violence is racism.”

“We have an all-white industry from top to bottom, from the corporations that make guns to wholesalers to retailers. From an equity point of view, it’s as unequal a situation as there could be.”

Speaking with the news service after the murders in East Buffalo, Miller said, “We are plagued by mass shootings” before adding that there are many more people of color who are killed by guns in cities each year who receive little media attention.

“In Philly, our goal is to focus on urban violence. We educate the public especially beyond the city about the problem.”

Heeding God’s Call to End Gun Violence is leading an interfaith gun violence awareness event in Philadelphia’s Center City on June 9, with stops at multiple locations including the Catholic Basilica and a site of a 2020 shooting death.

“It’s a big deal that the Philly faith community is now taking on the issue of gun violence in a way it hasn’t before,” Miller said.

“Our hope is to make enough of a buzz to send that news around wherever we can, so others say, ‘I’m a person of faith too. This is something I can do.’” 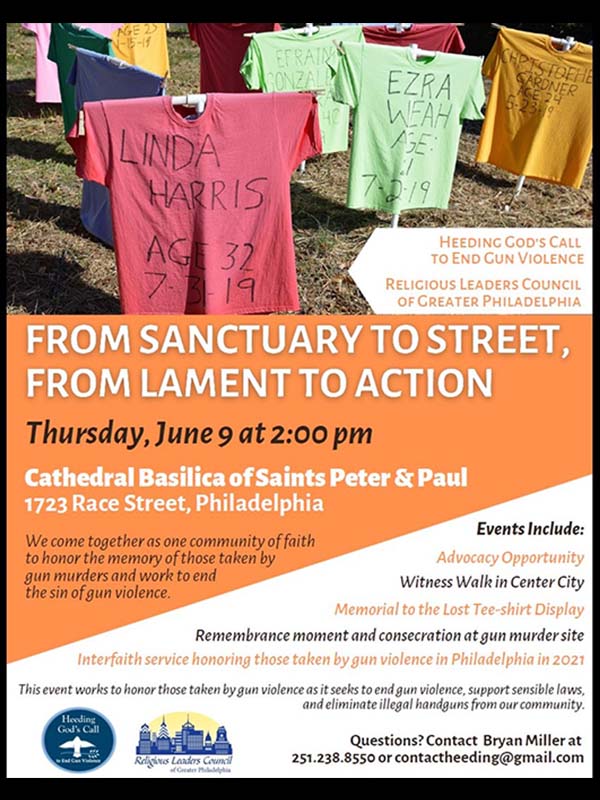 Flyer for June 9, 2022 event in Philadelphia, via Bryan Miller.

Flyer for June 9, 2022 event in Philadelphia, via Bryan Miller.

One idea for congregational action before the Addressing Violence in the U.S. committee is business item VIOL-09 from Santa Fe Presbytery: “On Commending and Recommending the Guns to Gardens Movement.” That overture encourages churches to help communities dismantle guns and use their remnants for peaceful purposes. The overture’s rationale mentions the 10-year anniversary of Sandy Hook and suggests that congregations “join in Gun to Gardens around that date, as part of a national commemoration for action and healing.”

Miller said that gun violence activism should be “the top order” at GA225. “Nothing happens without activism. Jesus was the greatest activist.”

The overture from Chicago Presbytery and the ACSWP report outline the church’s past work on gun violence, including 18 Assemblies that took actions from the 108th PCUS Assembly in 1968 to the 213th PCUSA Assembly in 2001.

The title of one approved item from GA221 in 2014, “Overture 09-01: On Taking Meaningful Action to Reduce Gun Violence — From the Presbytery of National Capital,” shows the longstanding awareness that resolutions and recommendations are not enough. Meaningful action is required from church members, councils and surrounding communities to stem the tide of deadly violence.

Records at the Presbyterian Historical Society (PHS) show the behind-the-scenes work that produced “Gospel Values, Gun Violence” and other policy documents. They also show correspondence from Presbyterians in favor or opposition to campaigns against handguns, or assault rifles, or extended purchase waiting periods — progressively less ambitious efforts to keep firearms out of the hands of those who would use them to intimidate, maim or kill. 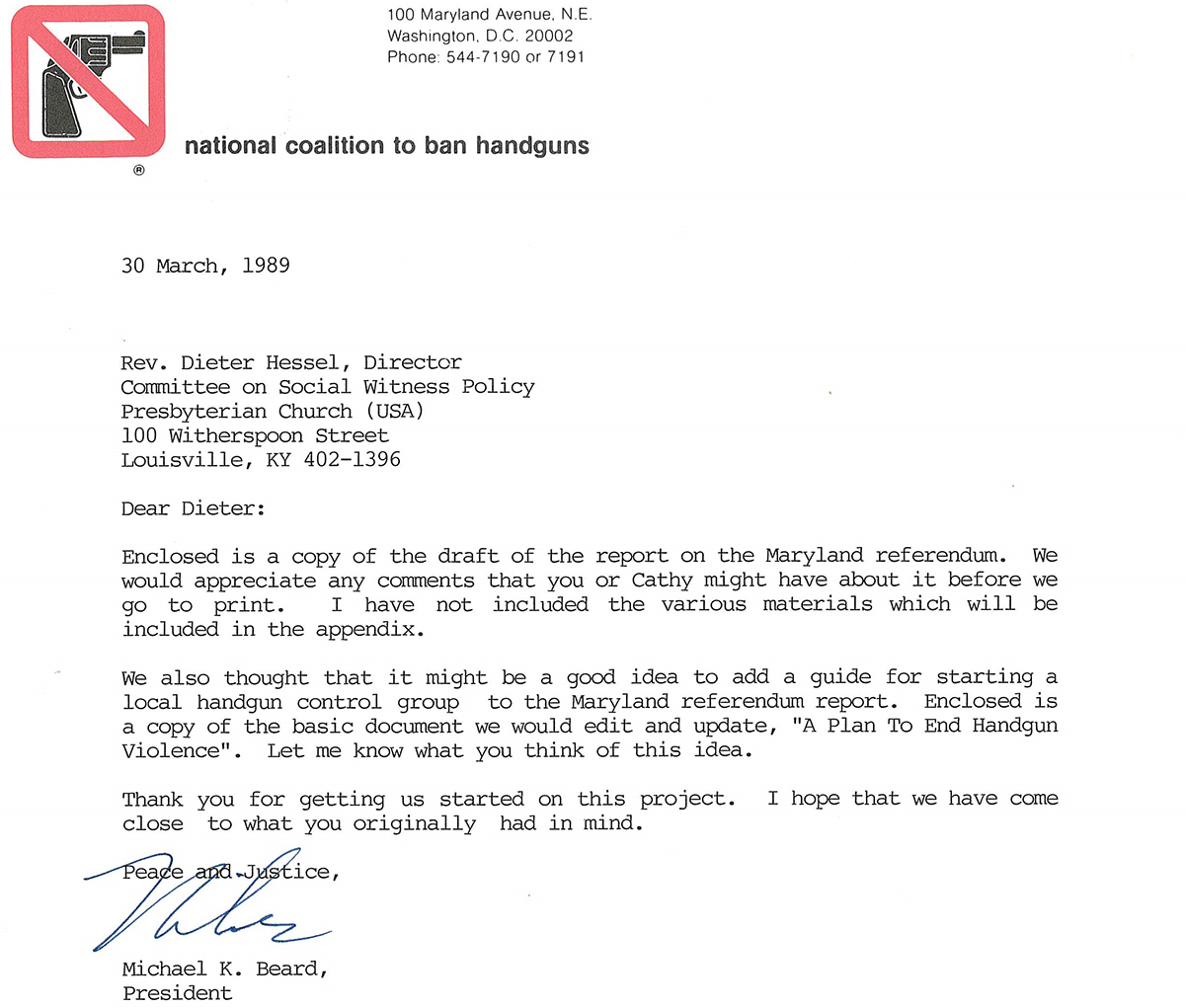 Three years of records from 2009 to 2013 show PDA supporting Presbyterian congregations directly impacted by gun violence. The incidents varied, from a robbery to a mass shooting at a community center to a shooting inside a church. What connects them all is a gun.

Some places mentioned in this article have been synonymous with gun violence for years — Philadelphia, Chicago, Sandy Hook. Others compel our attentions with the rawness of the news reports, the too-familiar calls for prayer, the forever screams of family members who will never see loved ones again: Laguna Woods, East Buffalo, Uvalde. The intersection of Frankford Avenue and Atlantic Street, where a man was recently gunned down walking his dog.

What names will show up in future emergency records? What will the church do this summer to keep cities and towns and schools and grocery stores and churches and people off its tragic lists?