Production and tech teams renovated and innovated for GA225 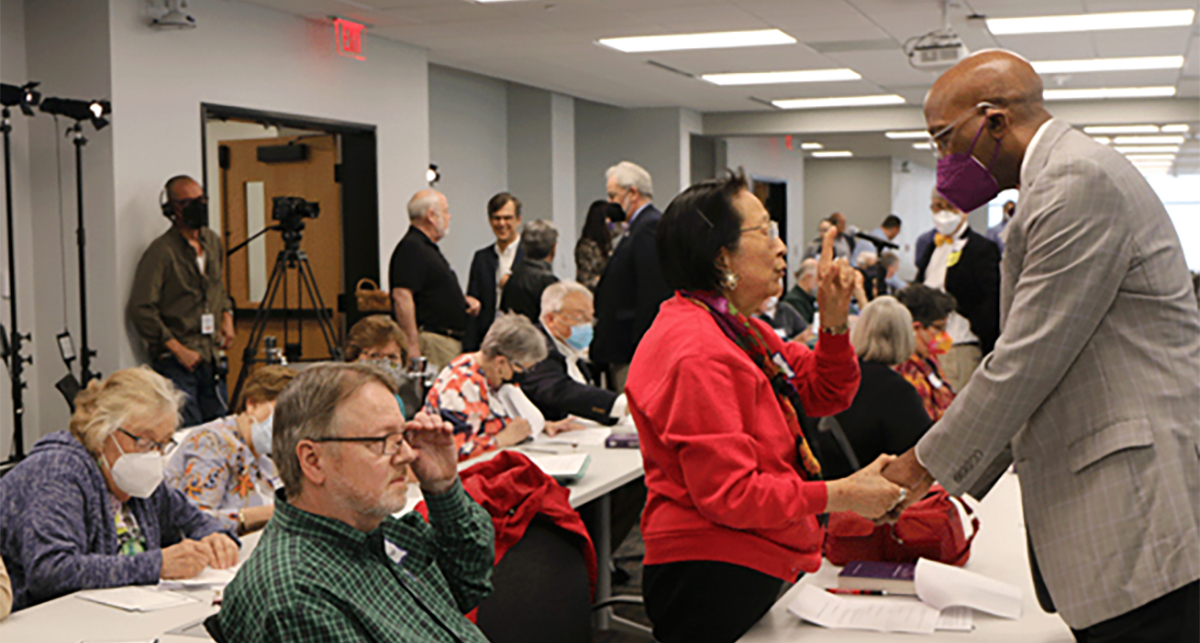 The Rev. Dr. J. Herbert Nelson, II, Stated Clerk of the General Assembly of the PC(USA), greets presbyters during Mid-Kentucky Presbytery meeting in the new conference room at the Presbyterian Center, June 2022. Photo by Randy Hobson.

Many staff and volunteer roles at the 225th General Assembly are well known to Presbyterians: Stated Clerk. Parliamentarian. Co-Moderators.

But Zoom Coordinator? Committee Technology Manager? The monstrous-sounding (but really indispensable) “IT” team? Not so much.

Let’s fix that now. Because the production and technology teams for GA225 are staging this summer’s gathering — the first hybrid Assembly in the church’s history — even as they plan for the needs of the future church. “Innovation” is one of their buzzwords. Same for “flexibility,” “creativity” and “teamwork.”

Over 100 people are listed on the “GA Roles 225” spreadsheet, some with backstage roles inside the Presbyterian Center, others remote duties via Zoom and other digital platforms. Committee meetings will happen in-person at the Center; plenaries online.

As Presbyterian News Service reported in Mid-Kentucky Presbytery’s trial run of the renovated Presbyterian Center, a new production studio is part of a $2.4 million renovation that added a conference space and other production and meeting areas.

Working to coordinate the meeting, tech and production aspects of the Assembly is Julia Henderson, who manages General Assembly Planning and Business Management for the Office of the General Assembly (OGA). Her co-leaders are Nathan Young, General Assembly 225 Producer, and Vicente Guna, Associate Director for Technologies in OGA. All spoke with the News Service in the frenetic final days before GA225, when that freneticism will go to 11.

“We have knowledgeable staff and volunteers who are dedicated to producing a high-quality General Assembly,” Henderson said. “We communicate with one another, trust each other, plan in detail so we anticipate as much as possible in advance and debrief to talk about what went well and brainstorm improvements.”

Between her, Young and Guna are decades of Assembly experience. The hybrid format of the 225th General Assembly has seen them and the other team members doing more than ever before.

Jayne Culp, Staff Assistant for OGA and GA224 Co-Moderator Supporter, said that many of the perennial Assembly roles have added tech responsibilities, including Vote Coordinator, Assembly Recorder, Motion Coordinator, Speaker Recognition Facilitator and Interpreter. Job-sharing should help the team handle the work over the three weeks of the Assembly and weather any Covid-related absences.

“It looks so seamless on screen that you have no idea about the number of people working,” Culp said.

Young said that one of the biggest differences between this hybrid assembly and the 2020 all-online Assembly is the way the team made permanent changes that still allow for flexibility. “We built a system to facilitate that from a broadcast and production side.”

He and Guna ticked off improvements for the Center, including eight robotic cameras for plenary sessions and 28 channels of new wireless microphones. The renovation upgrades tripled the internet capacity of the building’s broadband and made it possible for the chapel to also serve as a production hub. Robotic cameras will facilitate the hybrid worship services.

Another big change is the committee rooms setup. “Everyone in committees will be listening to interpretation on their own headphones, whether in English, Spanish or Korean,” Young said, comparing the model to that used by the United Nations. “We’ve been making tweaks every few days as we see how the new system impacts participants.”

Guna said, “Flexibility is core to what we’ve done. Special Assembly committees or task forces could use these tools in the future,” saving money on rental spaces between Assemblies.

Guna leads the GA technology team, including the back-end work for PC-Biz. For this Assembly cycle that meant developing and launching myGA, a connection portal for GA participants that began taking shape in January. myGA facilitates registration, lodging and travel and also provides training for commissioners, advisory delegates and public advocates via GA Connections.

“Most people see PC-Biz during the Assembly, but it’s been supporting Assembly prep for the last six months,” Guna said. “It’s also multilingual now, thanks to Global Language Resources,” a part of the Administrative Services Group (ASG). “It’s very cool that all the constituents of the church have been working in that shared [digital] space.”

Guna added, “PC-Biz has also grown to serve committees during GA225, not only plenaries. It will be used by four committees at a time” during the first two weeks of the Assembly. 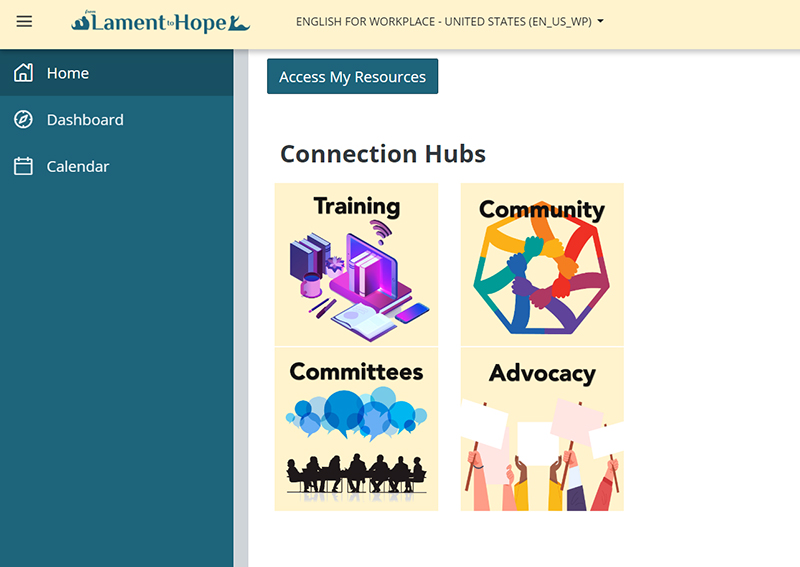 The increased space and system capacities have long-term benefits to the denomination and groups it works with, including clients that rent space in the Center.

“There are already future plans for using the new production and studio spaces,” Young said, noting that five PC(USA) boards will use the Center for meetings between now and October. The Presbyterian Mission Agency (PMA) is looking at the possibility of live streaming broadcasts. National church townhalls are an option.

All of that is down the road. For now the team is laser focused on GA225.

“There is a lot of technology for each committee member to use,” Young said. “Each commissioner is responsible for their own device,” including access to language interpretation, speaking queue and parliamentarian tools.

Henderson said, “One lesson we learned from GA224 and from leasing PC-Biz to others has been the importance of our hands-on training for PC-Biz. With an hour of training, commissioners and advisory delegates can be ready to successfully and independently manage all of the functions of the platform, from seeking recognition and voting to submitting motions.”

“At this GA we have quite a team, including 10 people in the production studio,” he said.

“PC Biz will have 8 people — and those are just for plenary,” Guna said. “The help desk has more than 30 people.”

Team leaders, like their tech and production assets, don’t develop overnight. Young’s title was backstage assistant at his first of eight Assemblies. Guna’s role managing technology has grown since his first Assembly in Detroit, where he wired the convention center for plenary votes. 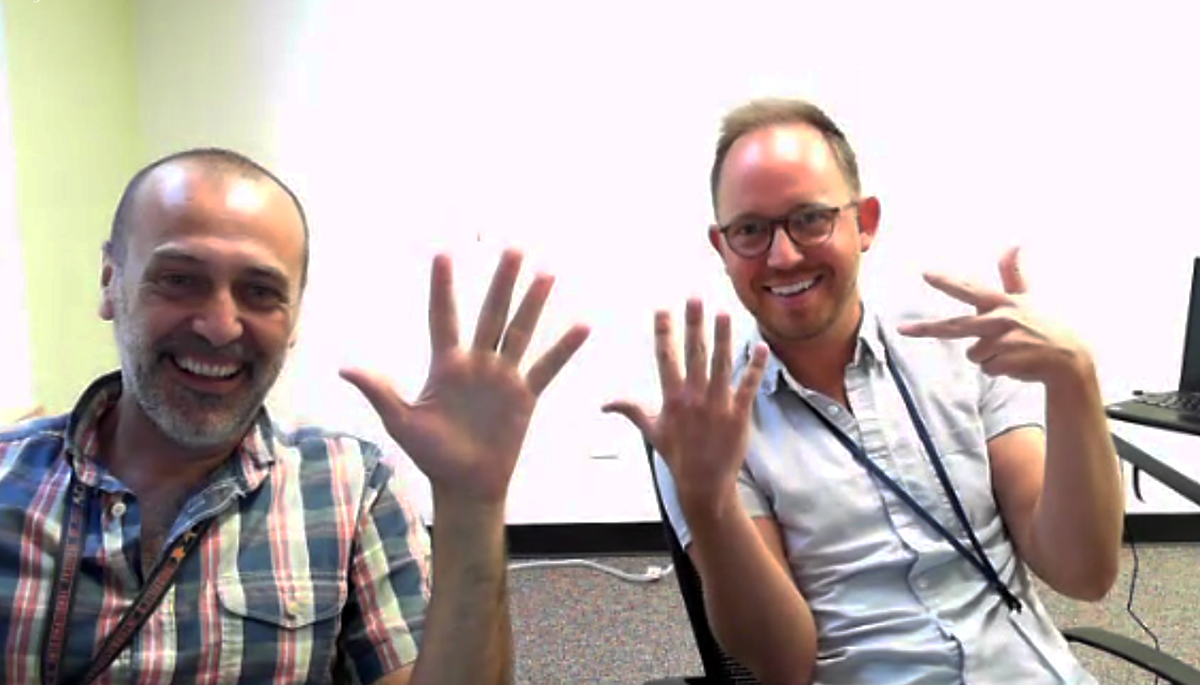 Guna (left) and Young (right) holding up fingers for each Assembly they’ve worked at, June 2022.

Installing new wiring and creating new building spaces in the Center was managed by ASG, which Guna said worked “tirelessly” to have things in place for committee members in June.

“The partnership ASG has brought to this process has been amazing. They’re handling construction and audio visual even now,” Young said.

“Kathy Lueckert and her team worked so hard to carry out the renovations,” Guna said. “They helped move GA beyond OGA,” by bringing in talented people from other agencies and entities in the church.

Throughout, Henderson has kept the staff and volunteers ticking, building on the lessons of GA224.

“She broke down the silos of the General Assembly process and showed us how much stronger we are when we collaborate across teams,” Young said.

He gave an example that brings us back to two new roles on the GA spreadsheet: Script Docket Leader and Script Scroller.

“Before we even began preparing for GA224, I wanted a live script document for plenary. Julia said ‘Let’s figure it out.’ We worked together and made it happen.”

Now the live script is central to final planning of plenaries — an indispensable innovation that helps the PC(USA) and groups outside the church who use PC-Biz and other PC(USA) meeting systems during their gatherings. In the first week of June, “the Presbyterian Church of Canada used our model, which was incredibly gratifying to see,” Young said.

Guna said, “Julia opened up the gates to the full collaboration and openness of GA. She set up new standards for being open to all the creativity that was here.”

He also gave special mention to two other GA veterans who took on new tech responsibilities.

“Deb Davies has been the Assembly handler for years. She’s made a huge change to her work and been tireless in doing so. And Tim Cargal has done a huge amount with GA connections and Equip trainings.

“There’s one other group we need to give special appreciation to,” Guna said. “Assembly participants,” including commissioners, advisory delegates and committee resource personnel.

“They’ve been very open to what we’re doing. They saw through the changes we made to PC-Biz and myGA and the committee work and have stayed with it.”

Now it’s showtime for everyone.