Home News 'We are not frozen, and we’re not chosen'

'We are not frozen, and we’re not chosen' 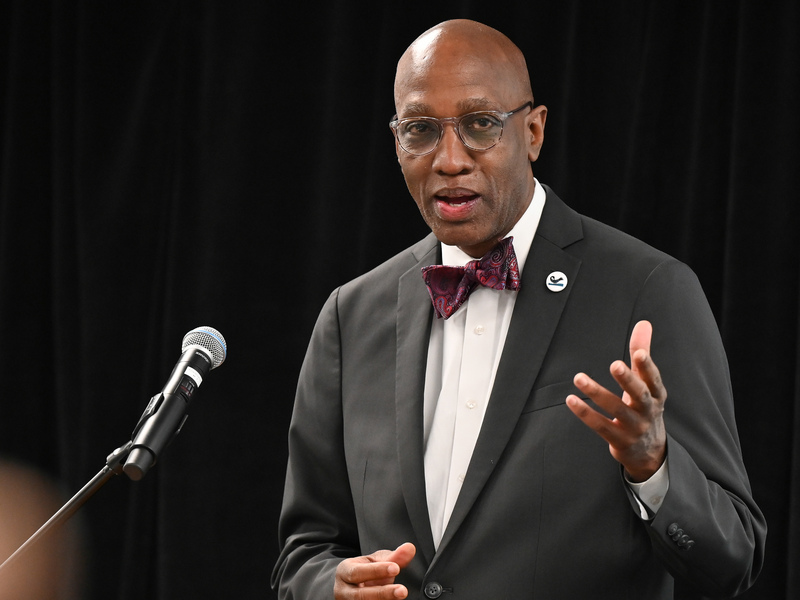 The Rev. Dr. J. Herbert Nelson, Stated Clerk of the General Assembly, gives a report during Plenary 2 of the 225th General Assembly on June 18, 2022. (Photo by Rich Copley)

The Rev. Dr. J. Herbert Nelson, Stated Clerk of the General Assembly, gives a report during Plenary 2 of the 225th General Assembly on June 18, 2022. (Photo by Rich Copley)

During his state of the church address on June 18, the Rev. Dr. J. Herbert Nelson, II, Stated Clerk of the General Assembly of the Presbyterian Church (U.S.A.) told commissioners at the 225th General Assembly that the vision for the PC(USA) is to be more faithful to Jesus Christ.

“What that means is to shake up the world in order to be a vision for God,” he said, “in a world that is in dire need.”

According to Nelson, the church is not dying, but reforming, getting rid of some things and taking on things we never thought we would. He would like to see the PC(USA) get rid of the term “frozen chosen.”

He asked, “What abilities do we have for the gospel to live inside of people? To give the possibilities to shape and form their world.”

To Nelson this is what we are called to do in Christendom, to challenge powers and principalities as we follow Jesus, a man filled with power no one had ever seen before, who died but was raised again.

“I believe if he can be raised from the dead, so can our churches, so can we,” he said. “We’ve got to figure out ways to innovate, innovate, innovate. But more than that, to be daring to go into the places that no one else wants to go.”

He added that as we step into communities and into people’s lives where there is no hope, we declare that we are willing to put it all on the line.

Near the end of his address, Nelson took a moment to reflect on how the new conference space in the Presbyterian Center serves as a reminder of what the Lord can do when Hades breaks loose.

“When we cry and whine about what we can’t do, and can’t see a vision, this is a testament — it’s not just an addition to a building — to a faith and to a General Assembly that we don’t stop and keep going,” he said.

The unified budget presentation for the Administrative Services Group (ASG), the Office of General Assembly (OGA) and the Presbyterian Mission Agency (PMA). It will be referred to the Financial Resources Committee, which will make a recommendation on July 9.

The General Assembly Nominating Committee Slate and the Co-Moderators Nominations Slate, which can be found at Ple-05 and Ple-06.

Videos of how each PC(USA) entity is spreading the Gospel of Jesus Christ here and around the world, available by clicking these links: