Home News ‘Will you come bear witness with me?’

‘Will you come bear witness with me?’

Fresh from preaching the opening service of the 225th General Assembly — with hundreds of worshipers scattered in locations throughout the Presbyterian Center and hundreds more joining via livestream from across the U.S. and around the world — the Rev. Gregory Bentley, Co-Moderator of the 224th General Assembly, stepped behind the lectern with Co-Moderator Elona Street-Stewart to inaugurate the newly renovated conference center with the first items of Assembly business. 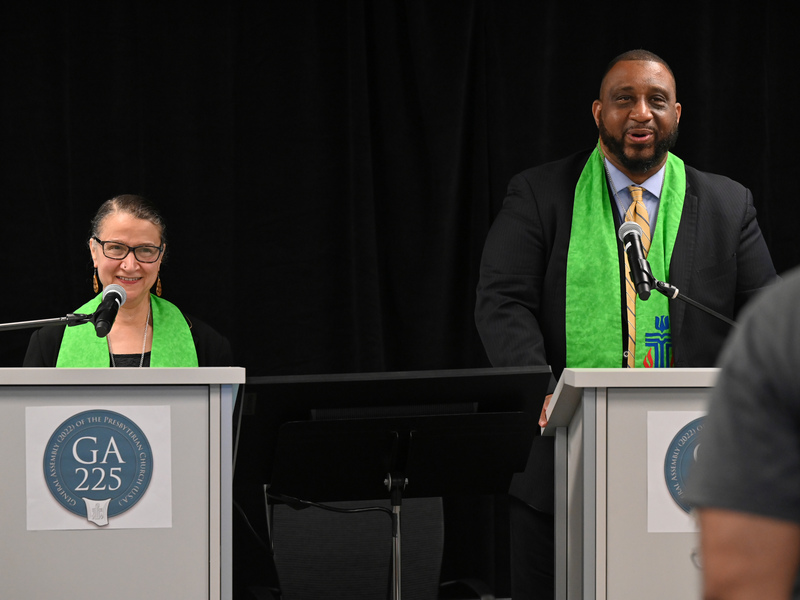 Street-Stewart’s upbeat welcome to the historic hybrid gathering and Bentley’s opening prayer set the tone for the two-hour opening plenary, which was by turns serious and lighthearted as commissioners and advisory delegates were called upon by Bentley to “adapt and adjust … as we learn to work together in new and sometimes uncomfortable ways.”

Before he prayed, Nelson acknowledged — to laughter — the unusual length of the gathering space by saying that his walk to the dais would take longer than his prayer.

A short video from the city of Louisville — which welcomed Assembly participants and explored the PC(USA)’s Louisville roots — was followed by live greetings from the Rev. John L. Odom, general presbyter for the Presbytery of Mid-Kentucky, host presbytery for GA225.

“On behalf of the 48 congregations, four new worshiping communities, and just over 6,000 Mid-Kentucky Presbyterians, we say welcome to Louisville and Kentucky,” Odom said in addressing the Assembly, “a place where we hope you will be at home during your stay for, if not the fastest, then by faith the most exciting, 22 days in Presbyterian General Assembly history in this first-ever hybrid GA.”

Odom’s remarks were followed by a video, “A Witness from the Presbytery of Mid-Kentucky,” the soundtrack of which is a new hymn of lament and hope debuting at this Assembly, “Come Bear Witness,” with its poignant refrain, “Will you come bear witness with me?”

Midway through the plenary, a peculiarly Presbyterian but essential piece of business —necessitated by the Covid pandemic and the ensuing online and hybrid Assemblies — was conducted.

Because only those physically present in Louisville were permitted to vote for a change to the standing rules that would allow for online Assembly participation, those commissioners and advisory delegates taking part online were initially blocked from voting via geofencing.

After ascertaining that a quorum — defined by the Book of Order as 50 ruling elders and 50 teaching elders from at least four synods — was present in the room, the Assembly voted 113–0 to approve the action PLEN-03.

“Thanks for making it possible to hold a valid Assembly,” Street-Stewart said following the action’s approval. “Now we can turn off the geofencing feature so that all can vote!” 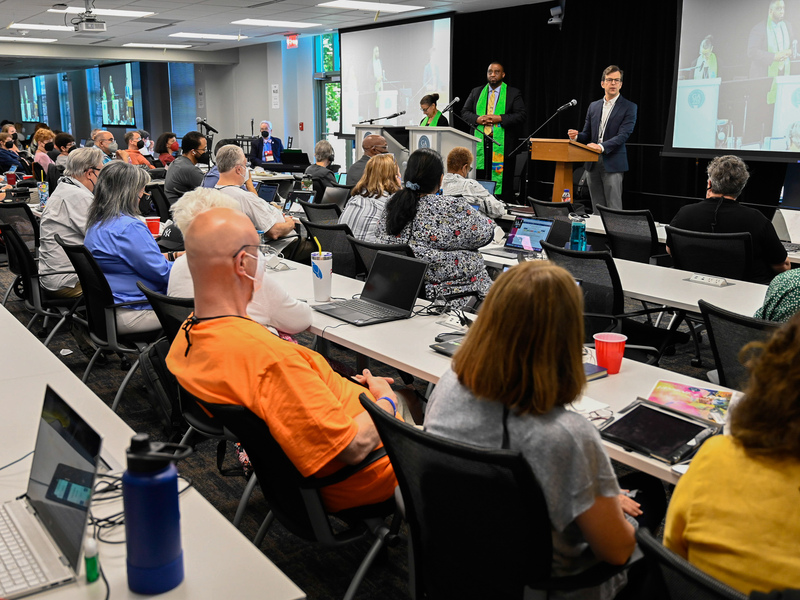 In other business Saturday afternoon:

As the plenary came to a close just shy of 3 p.m. ET, Street-Stewart thanked commissioners and delegates for their “patience and grace.” Bentley’s closing prayer acknowledged the “beautiful tapestry of humanity” gathered together to do God’s will.