The Rev. Gregory Bentley energized the opening worship of the 225th General Assembly with a fiery and provocative message on the need to move from religiosity to righteousness.

Bentley, Co-Moderator of the 224th General Assembly, began his message by likening today’s society to the one described in Micah in which God has “filed a lawsuit against the people of Judah for breach of covenant” after becoming tired of “their mean and messy and misery-inducing ways.” 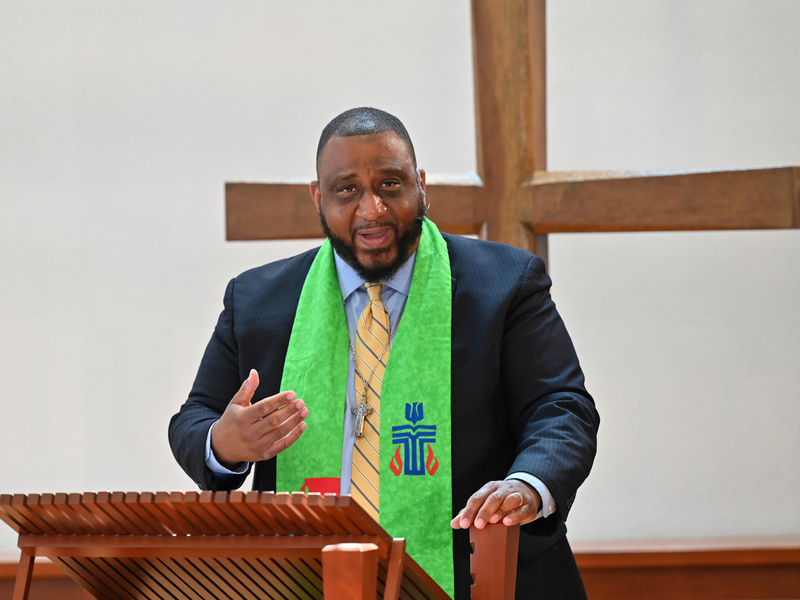 Although religiosity was at an “all-time high,” wickedness was rampant, with judges taking bribes, the wealthy using their power and influence to plunder and pillage the people and their lands, preachers only preaching what people wanted to hear, and false prophets failing to tell the people about their imminent peril, Bentley said.

Although modern society might fancy itself to be better, “we’ve just become more technologically savvy” at “doing what my grandmother called ‘devilment,’” said Bentley, who cited ethical lapses by the nation’s leaders.

God has responded by calling “nature herself to bear witness against the people in the court of cosmic justice,” he said. “The mountains, the rivers, the land, the animals are called to testify to the transgression and iniquity of humanity in its abuse and mismanagement of this beautiful garden over which God had given them stewardship.”

Bentley spoke during a service put together by a BIPOC (Black, Indigenous and other People of Color) planning committee that showcased the beauty and talents of a diverse group of people who wove Scripture, prayer, dance and music into a rich tapestry of decolonized worship.

In his sermon, Bentley lamented society’s failure “to tackle the evil triplets of racism, materialism and militarism,” which he said are the “result of moral decay and spiritual malformation that has brought about an idolatrous relationship with money and power.”

He lamented “catastrophic, intense and extreme wealth accumulation and concentration that is causing a corresponding increase in abject and soul-crushing poverty” and “ecological devastation.”

He also bemoaned an obsession with guns and decried the country’s brutal mistreatment of Indigenous people, the enslavement of African Americans, and other efforts to infringe upon the rights of marginalized people.

To those who wonder what should be done to make up for such transgressions, Bentley said, “We need to release performative religion and rededicate ourselves” to Micah 6:8, which says, “He has told you, O mortal, what is good, and what does the Lord require of you but to do justice and to love kindness and to walk humbly with your God?”

Society may seem too forgone to some, but “God will do what no other power — Holy Ghost power — can do,” said Bentley, adding with fervor, “Breathe on us, breath of God … that we may love the way you love and do what you would do.”

Ruling Elder Elona Street-Stewart, Co-Moderator of the 224th General Assembly, introduced a video about a way to take part in an economic equity initiative. For more information, go to restorativeactions.org.