Stated Clerk had determined all eight qualified for referral 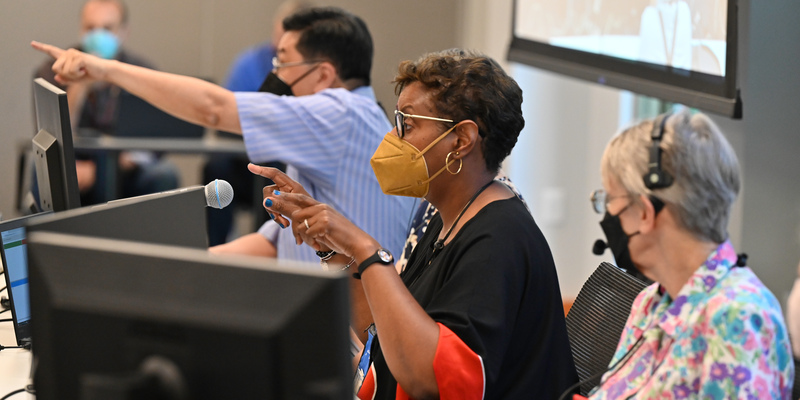 James Tse, Christi Scott Ligon, and Tricia Dykers-Koenig settle some final details before the Committee on Bills and Overtures meeting at the end of second day of the 225th General Assembly of the Presbyterian Church (U.S.A.) on June 19, 2022, at the Presbyterian Center in Louisville, Kentucky. (Photo by Rich Copley)

Meeting Sunday, the Bills and Overtures Committee voted 19-0 to refer eight commissioner resolutions to other committees of the 225th General Assembly for their consideration.

The Rev. Dr. J. Herbert Nelson, II, Stated Clerk of the General Assembly of the Presbyterian Church (U.S.A.), determined that all eight qualify for referral, Associate Stated Clerk Kerry Rice explained to the committee. Commissioner resolutions cannot amend the Book of Order, can’t already be before the Assembly for consideration, and can’t have been considered by either of the two previous assemblies, Rice said. “That’s why he brought these to you for your consideration,” Rice told the committee.

The commissioner resolutions and the committee they’re being referred to:

RGJ-14, On Violence and Hate Against Asian Americans and Pacific Islanders, to Race and Gender Justice.

ECU-08, On Solidarity with Palestinian Christians, to Ecumenical and Interfaith Engagement.

INT-19, On the Russian Military Invasion of Ukraine, to International Engagement.

HSB-10, On Addressing Mental Health Challenges at Every Level of the Church, to Health, Safety and Benefits.

GA-PAP-22, Updating the Memorandum of Agreement Between the Presbyterian Church (U.S.A.) and the Board of Pensions, to General Assembly Entity Policies and Procedures.

HSB-11, On Affirming Reproductive Justice, to Health, Safety and Benefits.

VIOL-11, On Directing MRTI to Place Gun-Related Companies on the Divestment List, to Addressing Violence in the USA.

MC-11, On Memorializing Non-Ordained Servants of the Church, to Mid Councils.

The committee also took these actions:

Cristi Scott Ligon of the Presbytery of Middle Tennessee moderates the committee. Iris Santoni Ortiz of the Presbiterio Del Noroeste is the vice-moderator.