Home News Isaiah and the call to 'do more'

Isaiah and the call to 'do more' 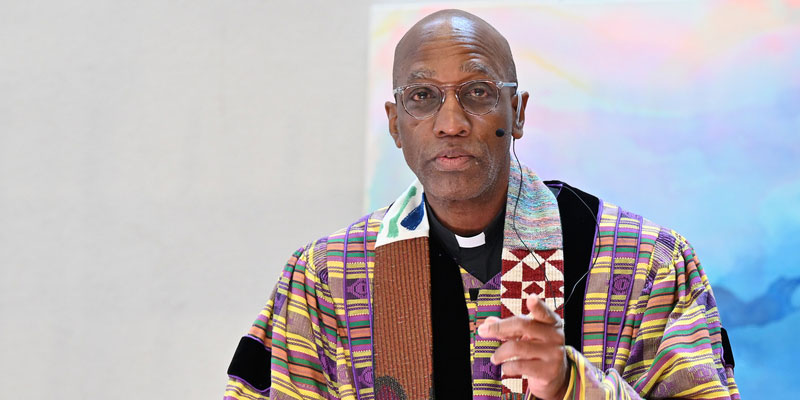 During today’s Juneteenth worship service inside the chapel of the Presbyterian Center, the Stated Clerk of the General Assembly preached from the Book of Isaiah, connecting the life of the prophet to the experiences of many Presbyterians in the past two years.

The service was livestreamed on the worship page of the GA225 website. Download the full Juneteenth worship bulletin here.

Throughout his sermon, the Rev. Dr. J. Herbert Nelson, II exhorted Presbyterians “to do more,” risking comfort and traditions —including their sense of what it is to be Presbyterian — to work toward liberation and justice for those most in need.

He began by recognizing the Juneteenth holiday, giving thanks that “there is repentance not just in Texas [site of the first Juneteenth commemorations celebrating the freeing of enslaved people after the Civil War], but across the USA.”

He preached from Isaiah 6:1-8, which was read earlier by Ruling Elder Purity Ruchago of Salem Presbytery (NRSV, from the Swahili), bringing laughter from the worshippers when he said “The prophet Isiah was in some ways weird … In some way most prophets are seen as being weird.”

Nelson said that many of us have been in a similar place as Isaiah was during Covid. “We thought we were going someplace joyous” and then disappointment arrived.

“Have you ever been there?” he asked to a chorus of amens. “When your joy turns to sorrow?”

The PC(USA) remains in that place now, even as the pandemic recedes from many attentions.

“The Lord has wiped away things we thought were full-proof,” Nelson said, forcing all of us to grapple with the “confusion and brokenness” of the world.

“I am convinced that the Church of Jesus Christ is in that mode now, just like Isiah …. Trying to figure out what to do in conditions we have never faced before.”

“That is a challenge for a denomination with a lot of rules,” he said to more amens and scattered applause. “It’s a challenge when we’re the frozen chosen.” 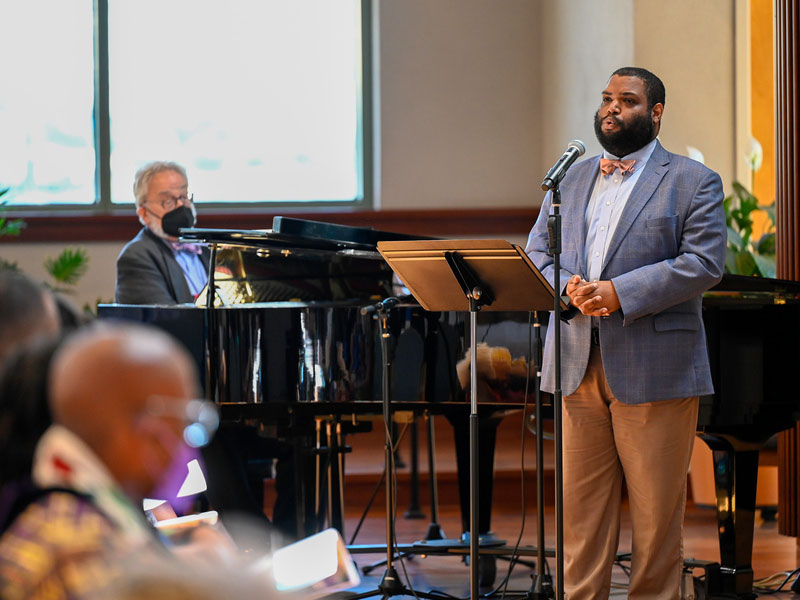 Phillip Morgan sings during the Juneteenth worship service at the 225th General Assembly on June 19, 2022, at the Presbyterian Center in Louisville, Kentucky. (Photo by Rich Copley)

Now is a time to embrace innovation, Nelson went on to say. And not just technological innovation, although he acknowledged how important that is to the current and future church.

“It’s time for us to find new ways of doing things that please the Lord. That is how we learn, by going to places where we are not comfortable.”

“We have to be willing to give something up to gain something,” Nelson said.

The amens continued, even if the applause were quieter.

“I’m not saying we have to become mean about it. But we have to be vigilant about our zeal for the gospel. It wasn’t just Isaiah, but Jesus who went to the cross for us. Thanks to God almighty, Jesus still lives with us.”

Nelson pivoted back to Juneteenth, saying he was worried the day could turn into what other national holidays have become. “Party over here, party over there.”

He called on people of faith to demonstrate the profoundness of the celebration, its implicit demand for universal liberation.

“I am convinced we can’t preach on Sunday about heaven and send people back to hell on Monday. We are called on in this day and age to be restorers of the breach.

“We have to be willing to risk something. Because it all comes from the Lord.”

Nelson asked Presbyterians, “How do we get engaged with transformation at every level we are living? How can we help other who can’t make it on their own?”

He turned to a personal story about his early years in ministry, which saw him move from a large congregation in Greensboro, North Carolina, to a new church development in Memphis.

“In many ways it was a relief, but it was also a journey I’d never taken before.” 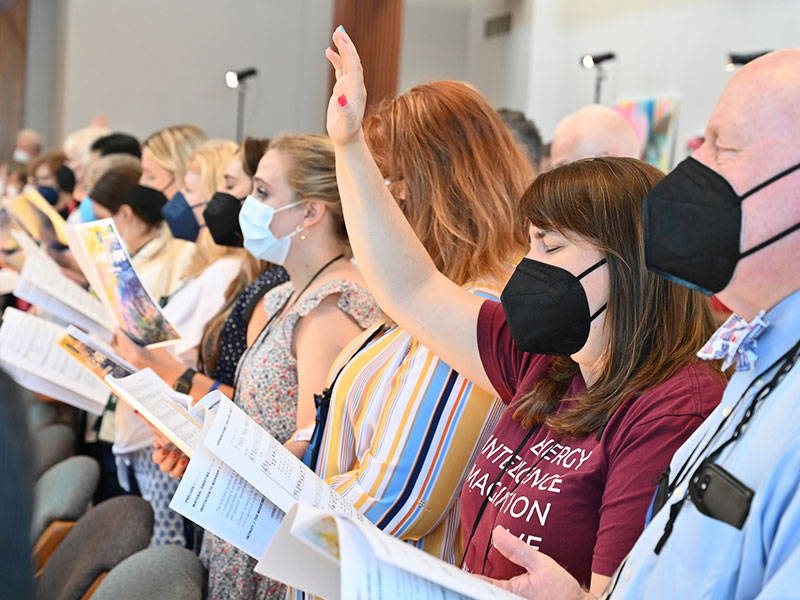 He talked about the children of that community, and his strong sense of ministry with that new call. Despite hardships, the community relationships kept him going, and his sense of being needed.

“We went through a lot, and the possibilities that the church would close. But I look at you today and say that church is still in existence, still working with poor people, still Presbyterian, and still walking by faith.

“We have to learn as a denomination that the work is not about our friends … it is about the world. Those who have been left behind.”

He said it is the job of mainline denominations “to recalibrate” toward that calling of service.

“I’m not here today saying we’re doing nothing. I’m saying we have to go deeper.”

“That’s what the prophet [Isaiah] was saying … Maybe the Lord can give me an impetus for going forward … and see the change is not out there, but in here.” The chapel of the Presbyterian Center, the Center itself.

“Thanks be to God the Presbyterian Church is respected in high places. The question is, do we use that for the betterment of humankind, as repairers of the breach?”

“I love this church,” Nelson said as he approached the end of his sermon. “I’m thankful for the celebration of Juneteenth. But I’m mindful this cannot be a flash in the pan moment. We must think through what the church has to be in our contextual realities. We must take seriously the charge that we are … not just church-goers but transformers of the present reality."

“We have to do more, Presbyterians,” he said, thinking “less of who we are” and more about “those we are called to serve.”

Before Nelson closed the worship service with a benediction, videos put together by the team planning and organizing the worship service, including recently elected Co-Moderator of the 225th General Assembly the Rev. Shavon Starling-Louis, were shown to those gathered in the chapel and online.

Learn more about worship participants and the full worship service from the bulletin. The Worship page of the GA225 website has additional information about worship at the Assembly.