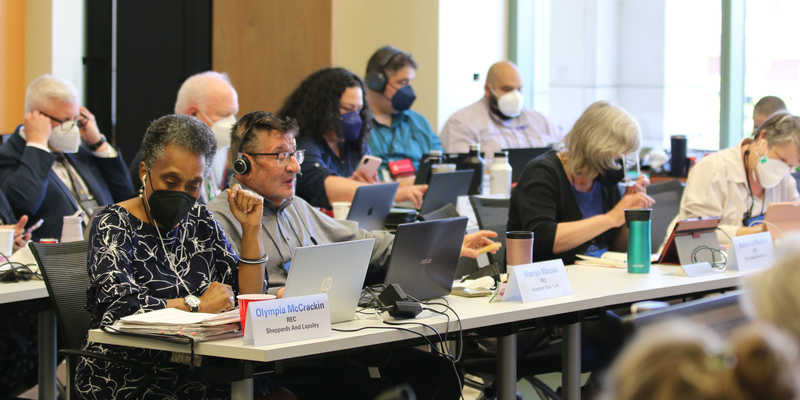 Commissioners Olympia McCrackin and Warren Marcus listen during the Rules of Discipline Committee meeting at the 225th General Assembly on June 20, 2022, at the Presbyterian Center in Louisville, Kentucky. (Photo by Randy Hobson)

On Monday the Rules of Discipline Committee turned down a recommendation by the Survivors of Sexual Misconduct Task Force but approved five other items, including one that will allow judicial processes to proceed against a person in ordered ministry who has renounced the jurisdiction of the church.

The recommendation the committee voted down, by a 19-5 count, was ROD-07, which tried to balance pastors and Christian educators keeping confidentiality with protecting children and vulnerable adults, the Rev. Carol Howard Merritt, who chaired the task force, told the committee. The task force heard stories about pastors who knew about a history of abuse and covered it up, she said. “We all love our church. We wouldn’t be here if we didn’t,” she told the committee. “We must work to ensure our love for an institution does not remove protection of the vulnerable.”

The committee did approve, by a 14-9 count, ROD-05, which will amend D-3.0106 regarding renunciation of jurisdiction. New Castle Presbytery proposed the overture, which states a judicial process does not end when a person in ordered ministry or a member renounces the jurisdiction of the church. “The accused has all the power to stop the process,” said the Rev. Joel Tolbert, overture advocate for New Castle Presbytery. “Our polity was not intended to give this much power to one person. The process is not just for the accused; it’s for the whole church.”

Also approved with an amendment was ROD-02, a proposal by the Rules of Discipline Task Force to revise the Rules of Discipline found in the Book of Order by removing time limits for filing allegations in disciplinary cases. In approving the proposed change by a 21-4 count, the committee amended the proposal to place a five-year time limit from the time the alleged offense was discovered, rather than committed.

ROD-01, which instructs the Office of the General Assembly to within one year create a resource guide that details the process of dealing with allegations of sexual misconduct, and ROD-06, which adds “receiving a disciplinary decision against a member of the congregation” to the list of proper business at congregational meetings, both received committee approval. The latter also allows congregations and their committees to meet electronically at the discretion of their sessions.

ROD-04, regarding an accused person’s rights to be notified when no charges are to be filed — an overture proposed by the Presbytery of Scioto Valley — won approval, 18-4.

In its rationale, the task force says the proposed revision is easier to understand and follow, stresses that church discipline is based on Scripture and the Constitution of the Presbyterian Church (U.S.A.), expands the role of mediation and alternate dispute resolution, and provides flexibility in crafting censures and remedies.

The Rules of Discipline Committee is scheduled to begin its second day of work at 9:20 a.m. Eastern Time on Tuesday. View the committee’s proceedings via livestream here.