TWE Committee members look back as well as forward to address the PC(USA)’s need for diversity, representation and reconciliation 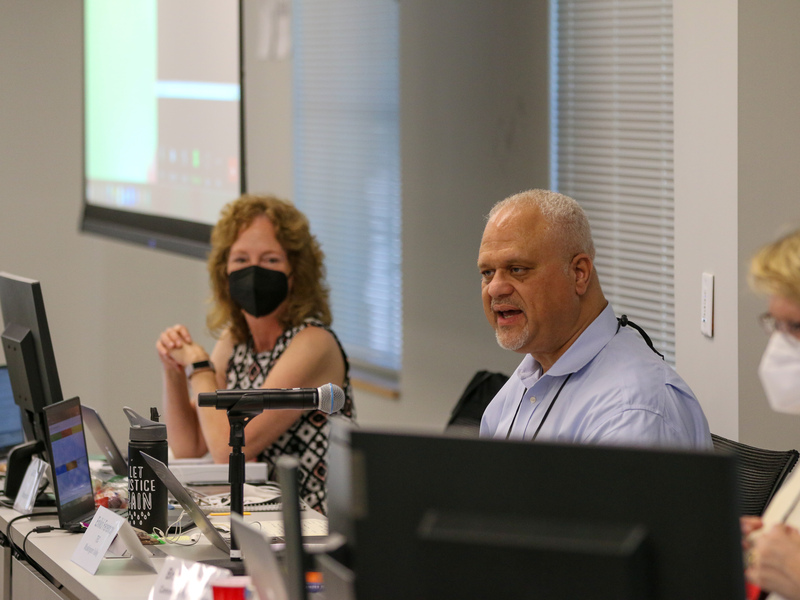 Committee moderator , Joseph Scrivner, speaks during the Committee on Theology, Worship, and Education meeting at the 225th General Assembly on June 20, 2022, at the Presbyterian Center in Louisville, Kentucky. (Photo by Randy Hobson)

Committee moderator , Joseph Scrivner, speaks during the Committee on Theology, Worship, and Education meeting at the 225th General Assembly on June 20, 2022, at the Presbyterian Center in Louisville, Kentucky. (Photo by Randy Hobson)

As if taking their cue from the Sankofa bird — the avian symbol adopted by the Co-Moderators of the 224th GA (2020) that flies forward while reaching back — members of the Theology, Worship and Education (TWE) Committee embarked upon their work with the repair of historic harms and the PC(USA)’s future wholeness and health squarely in mind.

The concern emerged clearly in their first two items of business, TWE-02 and TWE-18, two sets of recommendations for the Award for Excellence in Theological Education, both of which the committee approved unanimously.

“We have an opportunity to look back but also to look forward by righting a historic wrong this year by honoring the Rev. Dr. Gayraud S. Wilmore, who should have been honored in his lifetime,” said Dr. Saundra Tracy, chairperson of COTE. “Highlighting the Rev. Dr. Frank M. Yamada lets us look toward the future.”

Wilmore, a leading voice in founding the Black theology movement and the only Black member on the drafting committee of the PC(USA)’s Confession of 1967, died in 2020.

“How sad it is that we recognize [Wilmore] after his death,” said Teaching Elder Commissioner RJ Kang, Presbytery of Chicago. “I hope we can do better recognizing our colleagues while they are still alive. I hope our denomination is headed in a better direction on this.”

The committee’s subsequent approval of action TWE-15, a recommendation that the Assembly confirm the election of Dr. Asa Lee as president of Pittsburgh Theological Seminary, also passed unanimously. Lee, who assumed his duties as president on June 7, 2021, brought greetings to the committee via Zoom.

In recommending that the Assembly approve TWE-17, the confirmation of new trustees elected by Presbyterian Church (U.S.A.) theological institutions, the concern about the PC(USA)’s future was again raised.

“It’s appalling,” said Ruling Elder Commissioner Jeannie Dixon, Presbytery of Florida. “Our institutions need to do a better job of representation. They need to step it up.”

A comment was later added urging COTE “to discuss and make a priority the diversity and representation on the boards of trustees of related seminaries and to report back to the 226th General Assembly (2024).” 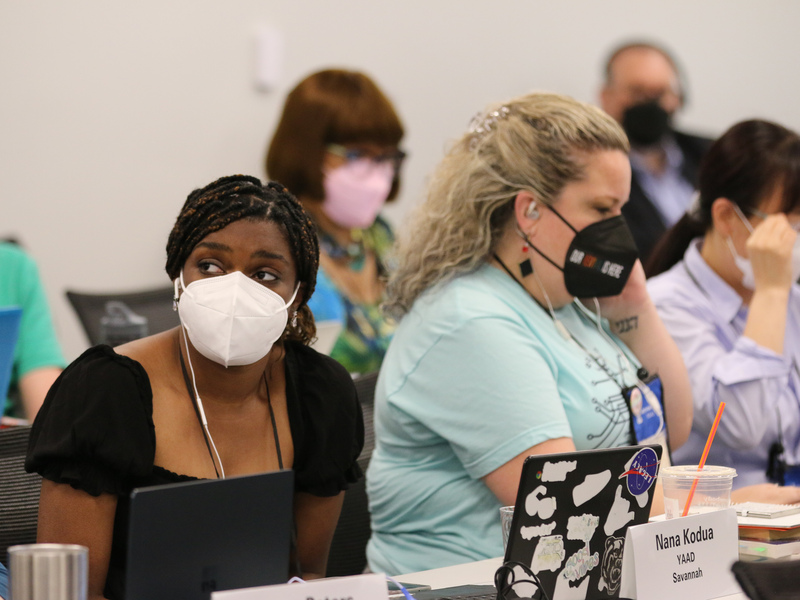 Young Adult Advisory Delegate Nana Kodua listens during the Committee on Theology, Worship, and Education meeting at the 225th General Assembly on June 20, 2022, at the Presbyterian Center in Louisville, Kentucky. (Photo by Randy Hobson)

Young Adult Advisory Delegate Nana Kodua listens during the Committee on Theology, Worship, and Education meeting at the 225th General Assembly on June 20, 2022, at the Presbyterian Center in Louisville, Kentucky. (Photo by Randy Hobson)

grant permission to theological institutions to celebrate the Lord’s Supper; and TWE-MIN-01, to receive COTE’s minutes.

Rada, in turn, introduced Auburn Seminary’s new president, the Rev. Dr. Emma Jordan-Simpson, who also addressed the committee via Zoom. “The covenant with the PC(USA) was the strongest selling point for me,” Jordan-Simpson said in describing her call to Auburn. “As God leads, I will do all that I can to steward this relationship and ensure that this covenant remains strong.”

In introducing the next item of business, Tracy said that COTE’s work with Auburn helped prepare them for their conversations with San Francisco Theological Seminary (SFTS), which was acquired by the University of Redlands in 2019.

The Rev. Dr. Christopher Ocker — who has already joined COTE by a verbal agreement made in late 2021 — was invited to speak to the proposed covenant between SFTS and the PC(USA), outlined in TWE-16. Following Ocker’s remarks, Tracy added that the covenant “grew out of good faith but also very difficult conversations.”

“We agreed that COTE and SFTS would use their best efforts to encourage the GA225 to approve the covenant between the PC(USA) and SFTS,” said Tracy. “I’m here before you to use my best efforts.”

After several commissioners rose to express their enthusiasm and commend the “spirit of reconciliation” inherent in this action, it was approved unanimously.

In other business Monday afternoon:

“This was a real team effort with all of us involved,” Ferenczy said at the conclusion of the committee’s first day. “It’s amazing what we can do decently and in order.”