1958 Union of the UPCNA and the PCUSA 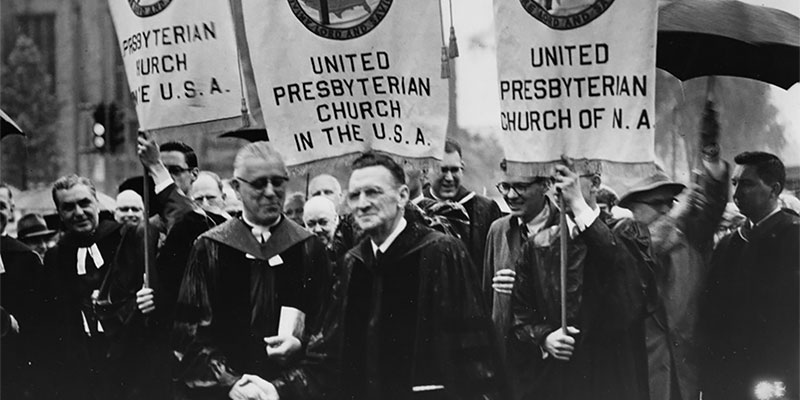 It was the last assembly for these two denominations because the very next day, May 28, the two groups joined forces for a momentous occasion: the very first General Assembly of the newly minted United Presbyterian Church in the U.S.A.

Prior to this, the UPCNA had around 250,000 members under the leadership of Stated Clerk Dr. Samuel W. Shane. The UPCNA traced its roots to the 1858 union of the Associate Presbyterians and the Reformed Presbyterians, two denominations with former ties to the Church of Scotland.

The PCUSA was much larger at the time, with well over 2 million members. It was established almost 70 years earlier than the UPCNA — it was the first Presbyterian denomination in the country, established in 1789. The stated clerk in 1958, Dr. Eugene Carson Blake, was passionate about this new union; he was determined to have a more powerful Church to live out the way of God. Having previously served as president of the National Council of Churches, Blake viewed ecumenicism as a priority for strengthening the ministry of the Church.

In the past, UPCNA leaders considered mergers with other Reformed churches, but none proved successful for the fiercely independent denomination. Even leading up to the 1958 union, not all UPCNA congregations and presbyteries were thrilled with the idea of joining with the PCUSA. A year prior, at their 99th Assembly, only 57% of commissioners voted in favor of the union. Nonetheless, this majority decision initiated the process to create the new United Presbyterian Church in the United States of America.

In anticipation of the union, the two denominations intentionally met in Pittsburgh for their final assemblies. The UPCNA gathered at Sixth United Church, with Rev. Robert N. Montgomery serving as moderator; the PCUSA held their assembly at East Liberty Church, with Rev. Harold R. Martin moderating.

The UPCNA observed their centennial assembly and celebrated the 75th anniversary of the Women’s Missionary Society. At the meeting, New York elder George W. Forsythe proposed a resolution that would permit a congregation to opt out of the merger and leave the denomination if two-thirds of its members voted in favor. Though six congregations petitioned to withdraw, in the end only one small New York congregation, with less than 50 members, was granted its independence. It was a remarkable feat to have every congregation — except one — support the historic union, when but a year prior 43 percent of commissioners were against it.

The Rev. Theophilus M. Taylor was elected as the first moderator. Taylor, a professor at Pittsburgh-Xenia Seminary and a retired UPCNA missionary, received support from members of both former churches. While on stage at the assembly, Moderator Taylor held together two Celtic crosses, signifying the two denominations joining as one. He proclaimed that he was waiting for the third cross — the Presbyterian Church in the United States (PCUS) — to join as well. 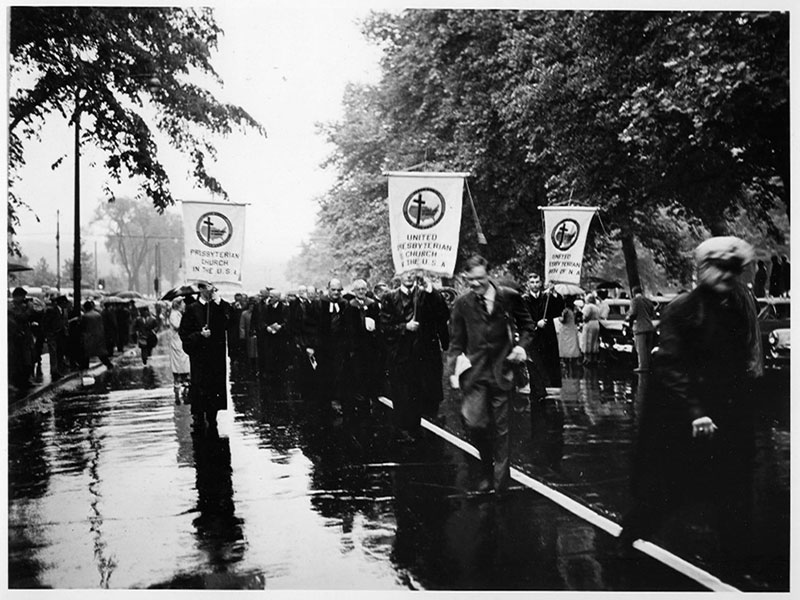 Procession with the three denominational banners on Bigelow Boulevard in Pittsburgh.

Of course, a merger of this scale came with careful planning. A Special Committee on Consolidations, with 40 representatives from both groups, had been given the daunting task of crafting recommendations for how to merge boards, national agencies, and mid councils. Over the course of a year leading to the union, the special committee worked together to consider the logistics.

Another big change that came with the union was the elimination of each entity’s Board of Foreign Missions. These two agencies were reformed and intermixed with three interchurch commissions to create the Commission on Ecumenical Mission and Relations. This transformation made the UPCUSA the first of America’s major Protestant denominations to embrace interchurch work rather than foreign mission work.

On that special day in May 1958, the general mood of the first meeting of the newly minted UPCUSA was one of optimism and strength, as the new denomination emerged with greater influence in both the religious and secular worlds. Under Blake's leadership, the UPCUSA entered an era of ecumenical and civil rights work, one that birthed the Confession of 1967.

Over time, disagreements in the UPCUSA emerged, leading to departures of some congregations in the years to follow. However, the feat of the 1958 union was impressive — and paved the way for the historic reunion with the Presbyterian Church in the United States (PCUS) in 1983.

To get a glimpse of this historic meeting of the UPCUSA, you can view images in Pearl, the Presbyterian Historical Society’s digital repository, including one of Dr. Martin Luther King, Jr. giving a speech at a breakfast for commissioners.