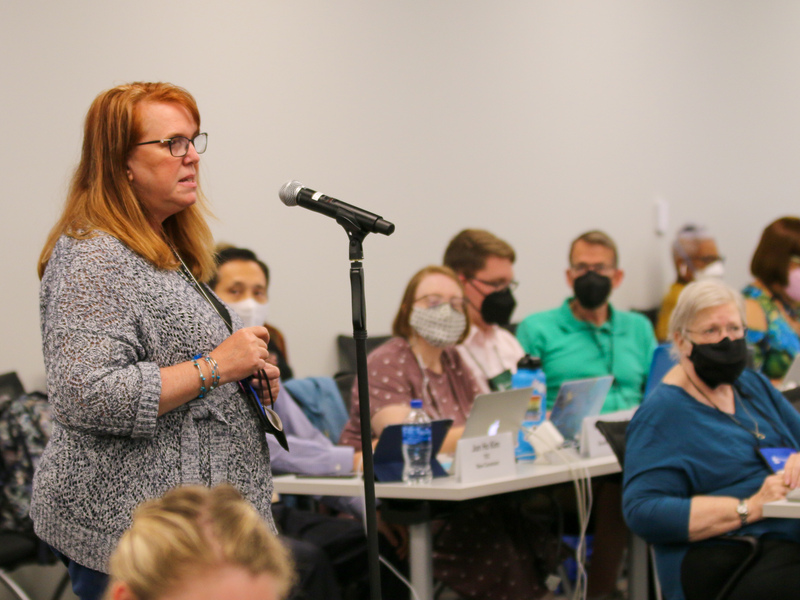 Commissioner Char Mace on the floor of the Committee on Theology, Worship, and Education meeting at the 225th General Assembly on June 20, 2022, at the Presbyterian Center in Louisville, Kentucky. (Photo by Randy Hobson)

Commissioner Char Mace on the floor of the Committee on Theology, Worship, and Education meeting at the 225th General Assembly on June 20, 2022, at the Presbyterian Center in Louisville, Kentucky. (Photo by Randy Hobson)

A spirited dialogue around three separate items calling for the possible addition of a new statement to the Book of Confessions dominated the Tuesday morning agenda of the Committee on Theology, Worship and Education, while a report and recommendations from the General Assembly Special Committee to Study the Reformed Perspective of Christian Education in the 21st Century took up the lion’s share of the afternoon.

The Rev. Dr. Barry Ensign-George, coordinator for Theology and Worship for the Presbyterian Mission Agency and staff liaison to the Committee on Theological Education, provided an informative presentation on the BOC, the documents that make it up, and the role they play in Presbyterian polity. The committee then considered the first of three actions, TWE-08, an overture from the Presbytery of Arkansas.

Addressing the committee, the Rev. Matt Bussell, overture advocate for TWE-08 — which calls for the development of a new confession that “would include the exploration of traditional theological topics such as the imago dei and sin, along with the very real contemporary theological topics such as race, gender, community, and technology”— said the presence of three related requests coming to the assembly “is the voice of the Holy Spirit calling the church to act.”

Overture advocate Jeniffer Rodriguez spoke to TWE-13, an overture from the Synod of the Northeast, that would ask the assembly to add “A Confession for Such a Time as This,” which she helped to draft. Rodriguez explained that she and other young ministry leaders saw the need “to express our feelings to church, community and world” around the church’s complicity with systems of justice and oppression.

The third item, TWE-01, a recommendation from the General Assembly Committee on Ecumenical and Interreligious Relations to add a new confession to “reject the sin of racism,” which impedes the PC(USA)’s ecumenical and interfaith work, was represented by GACEIR’s chairperson, the Rev. Amantha Barbee.

After hearing advice on the prescribed Book of Order process to amend the BOC from the Rev. Cathy Ulrich of the Advisory Committee on the Constitution, of which the BOC is Part 1 , and spending some time in small group discussions and a talk-back session, the committee chose to consider all three items together. Members then voted unanimously to approve TWE-08, on forming a special committee to write a new PC(USA) confession, as amended, and with the addition of three comments intended to honor the content and spirit of TWE-13 and TWE-01, both of which were answered by the committee’s action on TWE-08.

Upon concluding the items related to a possible new confession, the committee welcomed the Rev. Emily Chudy of Donegal Presbytery, co-moderator of the GA Special Committee to Study the Reformed Perspective of Christian Education in the 21st Century. Chudy gave a history of the special committee and a comprehensive overview of the report, which raises concerns about Christian education in the PC(USA) and proposes a series of recommendations for the church to move forward, as outlined in TWE-12.

Chudy explained that the work of the special committee, which was appointed by the Co-Moderators of the 222nd GA (2016), is already bearing fruit from the recommendations that were passed by the 224th GA (2018), namely that the Educator Certification Committee has expanded the accessibility of the Christian Education Associate (CEA), an entry level credentialing; intergenerational ministry is now a focus of the PMA; and the Presbyterian Publishing Corporation is now collaborating with the PMA.

Yet, as Chudy demonstrated, the challenges to Christian education and faith formation persist. “Overall, Christian formation looks different in most communities than it did 20 years ago,” said Chudy. “On Sunday morning … we fight against not only other activities, but we’re actually up against a cultural shift that is changing community. Because parents are the number-one influence, equipping parents to be followers of Christ at home has more impact than anything that any of our churches can offer. This requires new tools, new ways of thinking, and new ways of teaching.”

After spending some time in discussion and debate — and considering a series of amendments — the committee voted 33-2 to approve the special committee’s original set of recommendations as amended. The addition of a seventh recommendation related to New Worshiping Communities, introduced and moved by Teaching Elder Commissioner Martin Garcia, Whitewater Valley Presbytery, was also approved. As a church planter, Garcia wanted to “encourage 1001 New Worshiping Communities that every new worshiping community should think about including a Christian educator on their core team.”

In other business Tuesday, David Dobson, president and publisher of the Presbyterian Publishing Corporation (PPC) gave the committee an idea of the scope of the PPC’s work. After introducing several of his staff colleagues and the Rev. Dr. Cynthia Campbell, chair of the PPC board, Dobson showed a short video. The committee then received as information the PPC’s agency summary and approved two sets of its minutes from 2018–2019 and 2020–2021.