TWE Committee wrestles with theology, ecumenism in its concluding business 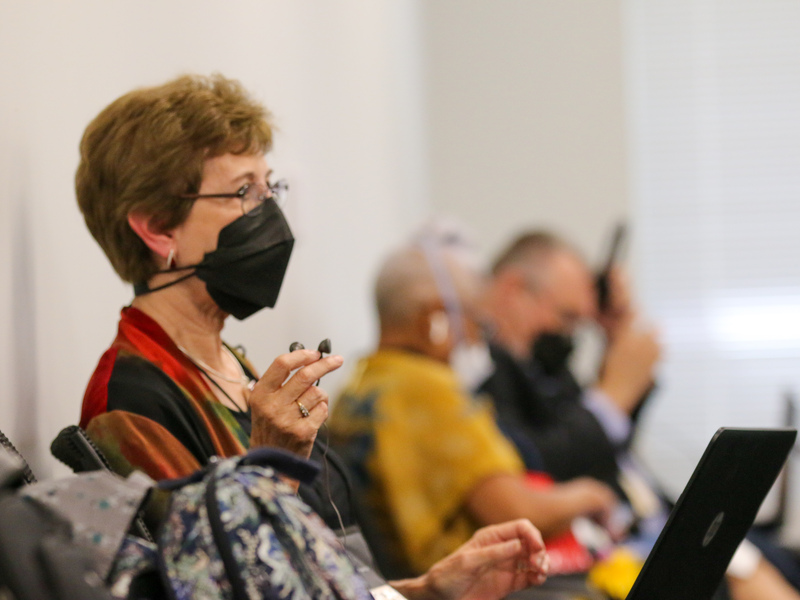 Saundra Tracy watches debate at the Committee on Theology, Worship, and Education meeting at the 225th General Assembly on June 20, 2022, at the Presbyterian Center in Louisville, Kentucky. (Photo by Randy Hobson)

Saundra Tracy watches debate at the Committee on Theology, Worship, and Education meeting at the 225th General Assembly on June 20, 2022, at the Presbyterian Center in Louisville, Kentucky. (Photo by Randy Hobson)

After completing two full days of committee business, the Theology, Worship and Education (TWE) Committee faced a lighter — if no less weighty — agenda on its concluding day of Assembly work.

Sharing his own call story to Air Force chaplaincy and now, in retirement, service to a small, rural farm church that couldn’t afford a pastor, Terrinoni laid bare the hard realities of the escalating mental health crisis and the growing number of deaths by suicide among veterans.

“When you’re deployed, the only real spiritual health adviser you have is the chaplain; in small communities, the pastor fills that same role,” Terrinoni explained, noting the lack of available mental health services for so many. “What I learned is that we need resources.”

Also on hand via Zoom to support the overture — which originally came to the 224th General Assembly (2020) — was Madison McKinney, co-moderator of the PC(USA)’s Advocacy Committee for Women’s Concerns.

Citing the even higher rates of suicide among women veterans, McKinney commended Blackhawk Presbytery for bringing its overture and, on behalf of women, further emphasized the urgent need for such resources.

In the discussion that ensued, several commissioners shared their own experiences with family members and ministry colleagues affected by trauma and moral injury.

Ruling Elder Commissioner Diane Ludington from the Presbytery of Great Rivers rose to remind the committee that many first responders who, like her husband, are also military veterans, experience further moral injury as they protect and serve here. A comment to that effect drafted by Ludington was approved by a vote of 24–7 and added to the original motion. A second comment related to conscientious objectors, which was offered by Teaching Elder Commissioner Will McGarvey, Presbytery of San Francisco, was also approved and added. The original motion, with comments, was subsequently approved 31–0.

In other business, the committee took up two items related to the Directory for Worship. The directory — part of the denomination’s Constitution — gives standards and norms for the ordering of worship in PC(USA) congregations and councils. It also lays out the theology that underlies Presbyterian worship, “outlines appropriate forms for worship and highlights connections between worship and Christian life, witness and service.”

TWE-05, an overture from the Presbytery of Santa Fe to the 223rd General Assembly (2018), which the Assembly referred to the Presbyterian Mission Agency’s (PMA) Office of Theology and Worship, proposes nine revisions, one of which has two parts, to the directory. The Office’s response, which was prepared for the 2020 General Assembly, was deferred until 2022.

The Rev. Forrest Claassen, moderator of the Advisory Committee on the Constitution (ACC), which had likewise offered advice — primarily to avoid such things as duplicative language and list making, wherever possible —  spoke to each of the recommendations separately as they came to the floor. The Rev. Dr. Barry Ensign-George, coordinator for Theology and Worship for the PMA and staff liaison to the Committee on Theological Education, rose on several occasions to highlight the PMA’s comments.

After entertaining a variety of motions and amendments, the committee hewed closely to the ACC’s advice by voting to recommend that the Assembly approve five of the recommendations as amended, approve one and disapprove the other part of the two-part recommendation, and approve three as submitted.

The committee then heard via Zoom from the Rev. Dr. Amy Parker, overture advocate as well as the initiator and writer of the overture from the Presbytery of West Virginia, who spoke to TWE-06. The overture, which was originally slated for the 224th General Assembly (2020), seeks to change the language in the directory regarding the laying on of hands at an installation.

After having researched the subject extensively, Parker said that her main concern is the directory’s prohibition of the laying on of hands at a service of installation.

“It felt to me that by limiting this act to ordinations only, there’s a risk in making it appear sacramental or signal a transfer of power,” Parker said.

The Rev. Dr. Christian Boyd, representing the ACC, explained that the advisory group’s rationale for recommending the overture’s disapproval relates to semantics and language, particularly as it concerns the PC(USA)’s ongoing ecumenical efforts. Boyd is also an elected member of the Presbyterian-Episcopal dialogue, which he referenced in responding to a question from Teaching Elder Commissioner Charlotte Mace from the Presbytery of the Cascades.

“How we word things in the directory can hang up an ecumenical dialogue for years,” said Boyd. “The laying on of hands must be for ordinations only. For a new ministry in a new place, there is a blessing [in the Episcopal tradition]. Otherwise, it looks like we are constantly reordaining people.”

Ensign-George and the Rev. Amantha Barbee, who also addressed the committee in her capacity as chairperson of the General Assembly Committee on Ecumenical and Interreligious Relations, similarly emphasized that because the laying on of hands is a practice shared by others in the wider Church, any change in the directory’s wording could be problematic for the PC(USA)’s ecumenical relationships.

“It takes years and years of work to work with our ecumenical partners,” Barbee said. “I would ask that we be very careful about barriers that we put in place that would set multiple years of work behind, or even have us start at the beginning. I have seen that in my six-year tenure.”

Ultimately the ACC’s advice to use broader language that would not explicitly prohibit the laying on of hands at an installation or commissioning — namely, “Signs and symbols of blessing may be conferred on the newly installed or commissioned person” — was adopted by the committee as an amendment.

The amended proposal, which was then approved by a vote of 27–3, will be the language that will be recommended to the full Assembly.