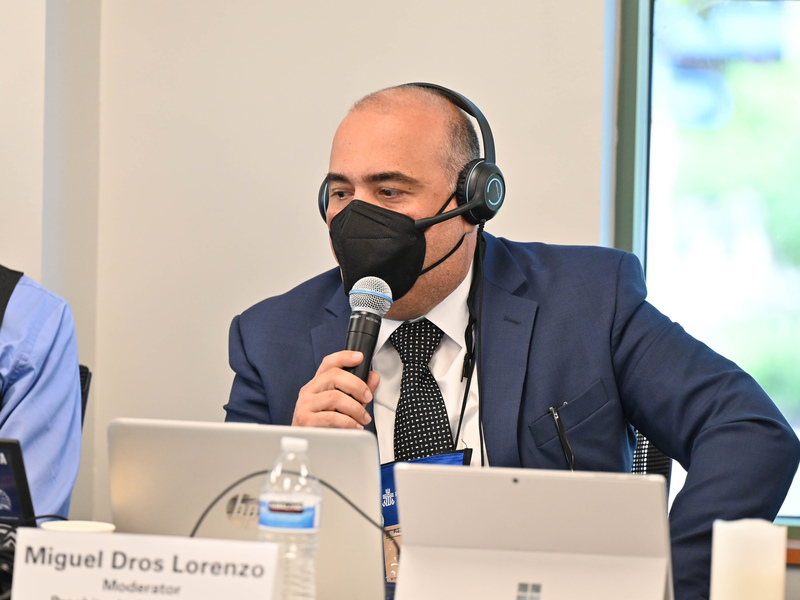 Miguel Dros Lorenzo moderated the Environmental Justice Committee meeting on June 23, 2022, in his native Spanish, with real time English and Korean translations available for those who needed it. (Photo by Rich Copley)

Miguel Dros Lorenzo moderated the Environmental Justice Committee meeting on June 23, 2022, in his native Spanish, with real time English and Korean translations available for those who needed it. (Photo by Rich Copley)

The Environmental Justice Committee voted Thursday in favor of a proposal that the Presbyterian Church (U.S.A.) divest from five fossil fuel companies, following the failure of a motion that would have postponed action until a group of other divestment overtures are taken up on Friday.

The 30-7 vote came after a roughly 30-minute presentation by the Presbyterian Committee on Mission Responsibility Through Investment (MRTI) explaining why it’s recommending that Chevron, ExxonMobil, Marathon Petroleum, Phillips 66 and Valero Energy be placed on the General Assembly’s Divestment/Proscription List.

In ENV-10, MRTI is recommending selective divestment, rather than complete or categorical divestment from fossil few companies, because, among other things, it believes that selective divestment has a greater impact on companies that are lagging behind when it comes to meeting GA standards, said the Rev. Kerri Allen, who chairs MRTI.

Furthermore, the recommendation, which is also a climate change measure, “follows GA policy and is responsive to the 223rd General Assembly's directive to our committee,” Allen said during the presentation. “If approved by the 225th General Assembly, the recommendation can be implemented by the investing agencies of the PC(USA), the Board of Pensions and the Presbyterian Foundation.”

Prior to ENV-10’s passage, much of the discussion focused on whether MRTI’s proposal is compatible with or clashes with other divestment overtures, such as ENV-07 from the Hudson River Presbytery, ENV-01 from the Arkansas Presbytery and ENV-08 from the Presbytery of Mid-Kentucky, that have not been presented yet.

Rob Fohr, Director of Faith-Based Investing and Corporate Engagement for the Presbyterian Church (U.S.A.), maintained that ENV-01 and ENV-08, as currently written, would circumvent the MRTI process, and therefore, wouldn’t meet the standards of the investment agencies on how they implement divestment recommendations, so no divestment would occur. However, ENV-07 is more “aspirational” in terms of the language that’s used and therefore could co-exist with ENV-10, he said.

A motion to hold off on ENV-10 was made but failed after Commissioner Andrew Kukla of Boise Presbyery said he’d rather act on ENV-10 than “overtures attempting to supersede” MRTI’s process, “especially when we know we can go backwards if we absolutely have to.”

MRTI’s recommendation, which had been forwarded from the Presbyterian Mission Agency Board, also prompted discussion about the potential impact of divestment on communities where fossil fuel companies are economic powerhouses.

Commissioner Nathan Sobers of Kendall Presbytery said what MRTI is proposing would “chase companies away from towns” where they’re the only source of livelihood.

Commissioner Peggy Casteel Huston of the Lake Michigan Presbytery questioned whether MRTI has to name the companies that it’s pursuing, and recounted how an acquaintance had lost their church “because so many people worked for the corporation that the MRTI people divested from, and when they left the church, the church could no longer afford to pay the pastor.”

In other business, the committee approved an amended version of ENV-04 for the Presbyterian Mission Agency to receive carbon offset donations and grant tree-planting and other greenhouse gas sequestration projects.

The committee also approved an amended version of ENV-05, directing PMA to create and implement a plan to survey Presbyterian Church (U.S.A.) buildings to estimate and, ultimately, reduce the carbon footprint by 25 percent.

It also passed ENV-11, which relates to striving to protect “30% of lands and waters by 2030 to address environmental challenges impacting climate and biodiversity.”