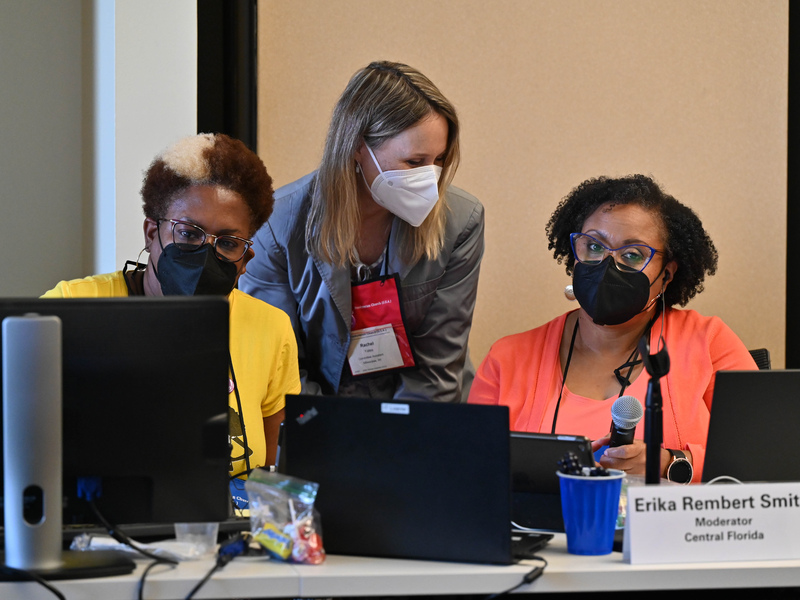 Vice-Moderator Angela Madison, Committee Assistant Rachel Yates, and Moderator Erika Rembert Smith confer during a meeting of the Addressing Violence in the USA Committee on June 23, 2022, at the 225th General Assembly of the Presbyterian Church (U.S.A.) in Louisville, Kentucky. (Photo by Rich Copley)

Vice-Moderator Angela Madison, Committee Assistant Rachel Yates, and Moderator Erika Rembert Smith confer during a meeting of the Addressing Violence in the U.S.A. Committee on June 23, 2022, at the 225th General Assembly of the Presbyterian Church (U.S.A.) in Louisville, Kentucky. (Photo by Rich Copley)

The Committee on Addressing Violence in the U.S.A. spent its second day of business addressing VIOL-01, VIOL-05 and VIOL-07.

[VIOL-07] Gun Violence Report and Recommendations was sent to the assembly by the Advisory Committee on Social Witness Policy (ACSWP). Sue Trigger, teaching elder from Heartland Presbytery and a resource person for ACSWP, served as the facilitator for the writing team. She outlined the details of the report.

She said much has changed since 2010, when “Gun Violence, Gospel Values” was adopted by the General Assembly, so it was especially important to create an update. The latest report shows that firearm fatalities have increased dramatically, from about 31,000 deaths in 2010 to more than 43,000 in 2020.

ACSWP believes the church can become a critical, accessible source of information, training, and pastoral care and support for people in crisis, working toward reducing the number of deaths. They asked for approval of the report as a way of “speaking with a prophetic voice to our nation and a significant step toward living into this call,” Trigger said.

The report calls for an effort called “The Decade to End Gun Violence,” devoted to awareness, reflection, advocacy and partnership among all entities of the church.

The committee was set to review [VIOL-01] Regarding Our Commitment to Gun Violence Prevention and [VIOL-05] On Advocating for Reduction of Firearm Violence later in the afternoon, but a group of commissioners banded together during a committee break, intending to create one comprehensive overture.

Jason Clapper, teaching elder commissioner from Northumberland Presbytery, suggested combining sections of VIOL-01 and VIOL-05 with the entirety of VIOL-07.

Along the way amendments were added to address the connection between guns and suicide and advocate for policies that address intimate partner violence, especially as it relates to gun violence. Other amendments included the call for additional access to mental health care and the need to encourage the entertainment industry to reduce depictions of gun violence and glorification of gun violence in movies, television, video games and music.

The amended resolution passed unanimously and advances to the assembly.

Running ahead of schedule, the group decided to move into its Saturday agenda, beginning discussions around [VIOL-11] On Directing MRTI to Place Gun-Related Companies on the Divestment List.

The resolution asked to direct Mission Responsibility Through Investment to suspend the corporate engagement process of their investment policy and immediately place all companies engaging in the manufacture, sales and retail distribution of firearms and components (such as bullets) on the PC(USA) divestment list.

Representatives from MRTI, the Presbyterian Foundation and the Board of Pensions explained to the committee why the overture could not be enacted as written, so an alternate resolution was developed.

Semi-automatic and assault-based weapons are already on the divestment/proscription list. The resolution was amended, asking the General Assembly to “direct MRTI to engage with Walmart, Dick’s Sporting Goods and Kroger, three publicly traded retail companies held by either the Board of Pensions or Presbyterian Foundation, that sell guns not classified as semi-automatic and assault-based weapons.”

On Saturday morning, after worship, the committee will meet to discuss [VIOL-09] On Commending and Recommending the Guns to Gardens Movement and [VIOL-08] On Living in Healthy Relationships Free of Violence and Coercion.

Tags: 225th general assembly (2022), the committee on addressing violence in the u.s.a.