Committee votes in favor of ‘Investing in a Green Future’ 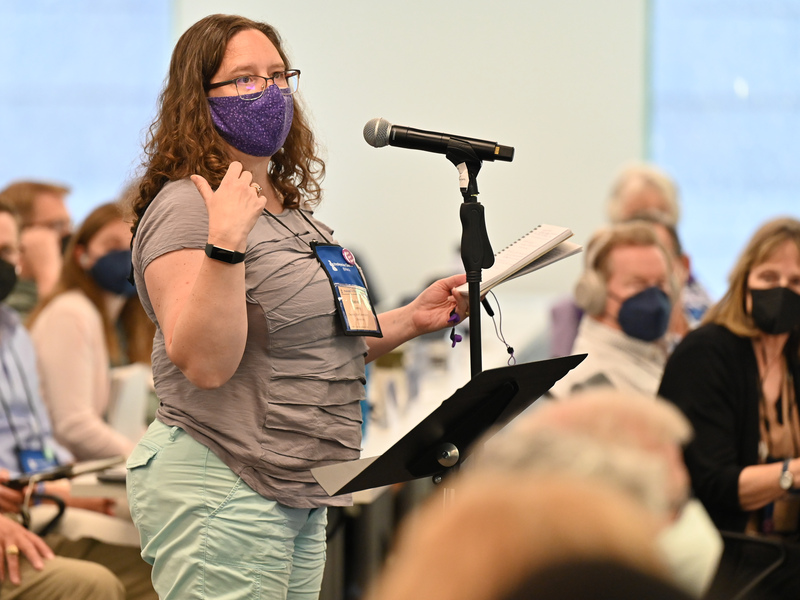 Commissioner Rachel Crumley of Shenandoah Presbytery speaks during the Environmental Justice Committee session on June 23, 2022, at the the 225th General Assembly of the Presbyterian Church (U.S.A.). (Photo by Rich Copley).

Commissioner Rachel Crumley of Shenandoah Presbytery speaks during the Environmental Justice Committee session on June 23, 2022, at the the 225th General Assembly of the Presbyterian Church (U.S.A.). (Photo by Rich Copley).

The Environmental Justice Committee of the 225th General Assembly heard multiple presentations and opinions on Friday about whether and how the Presbyterian Church (U.S.A.) should divest from fossil fuels, but it wrapped for the night after deciding more time is needed to think things through and devise a strategy for moving forward.

Prior to the divestment debate, the committee spent much of its time discussing and ultimately approving an amended version of ENV-02, which recommends that the General Assembly approve the study and recommendations in the Advisory Committee on Social Witness Policy’s “Investing in a Green Future: A Vision for a Renewed Creation,” which covers topics related to environmental justice, environmental racism and economic justice. Amendments included wording changes related to the need for pipelines to be properly maintained and for waste streams related to fracking to be cleaned and detoxified. There also was a directive added that ACSWP study the impact of lithium mining and other mining activity, paying particular attention to Indigenous lands and communities in South America and the western United States.

Later, discussion turned to divestment, just one day after the Environmental Justice Committee had voted to approve ENV-10, a recommendation from the Presbyterian Committee on Mission Responsibility Through Investment (MRTI) to divest from five fossil fuel companies to address concerns related to climate change. Taking that step would be a form of selective divestment.

However, after hearing proponents of complete or categorical divestment from fossil fuel companies and additional comments from other sources, such as representatives from MRTI, the Board of Pensions and the Presbyterian Foundation, the landscape was as clear as mud.

“I am totally overwhelmed; I don’t even know where to begin,” said Commissioner Danelle McKinney, a teaching elder from Dakota Presbytery who had spoken to others in the room who felt the same way. Some people are more talented “at getting us to the right answer,” she added, calling on the “big picture” members of the committee to provide assistance.

Some of the discussion hinted that pieces of various overtures might be combined into one acceptable overture to move forward along with ENV-10. The committee also talked about the need to determine which list of companies to use should it decide to approve a recommendation for categorical divestment.

Young Adult Advisory Delegate Hayley Hershenson from John Calvin Presbytery spoke about the need to map things out better to determine where there is overlap in the overtures and to examine the pros and cons. “There are common threads of desire in all of the different overtures, but of course, the method by which all of them are going for the same things is different,” she said. It’s important to “carefully understand and communicate the effects of the things that we’re trying to do in the different overtures.”

Vice moderator Aaron Ochart sent the group off with homework to do, hoping aloud that the group would return with fresh ideas and fresh perspective.

“I’m not going to take a straw poll right now, but consider where do you stand? Where do we need to be?” he said. Also, “acknowledge where you have maybe some proclivities, where you have some bias, and do some reading from folks on the other side.”