Committee approves resolution on racism as a public health crisis

Day 3 at the Race and Gender Justice Committee 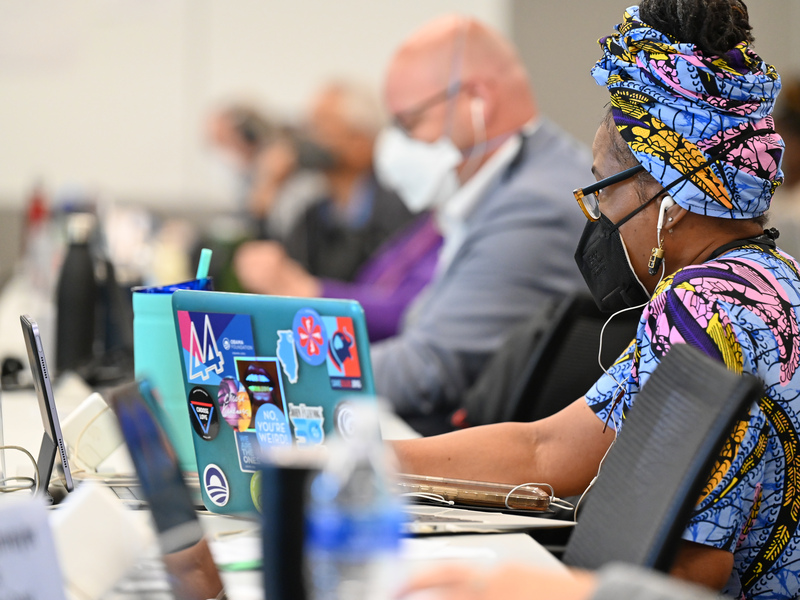 Cheryl Barnes, a Mission Advisory Delegate from Malawi, listens during the Race and Gender Justice Committee meeting on June 23, 2022, during the 225th General Assembly in Louisville, Kentucky. (Photo by Rich Copley)

Cheryl Barnes, a Mission Advisory Delegate from Malawi, listens during the Race and Gender Justice Committee meeting on June 23, 2022, during the 225th General Assembly in Louisville, Kentucky. (Photo by Rich Copley)

The Committee on Race and Gender Justice finished its work on Saturday, approving three resolutions that reflected the committee’s intersecting focuses: disparities experienced by Black women and girls, racism as a public health crisis, and violence and hate against Asian Americans, Native Hawaiians and Pacific Islanders (AA, NH, PI).

The morning’s work began with [RGJ-13] Report from the Disparities Experienced by Black Women and Girls Task Force. The lightly amended report directs the Presbyterian Mission Agency and the Presbyterian Publishing Corporation to create “education resources for congregations to identify and interrupt practices and policies that perpetuate the adultification of Black girls and criminalization of adolescent behavior.”

It also calls on other national agencies, including the Office of the General Assembly, Board of Pensions and Presbyterian Foundation, to identify and invest in antiracist and gender justice trainings “and/or to hire facilitators that center Black women and girls in diversity and inclusion training and that provide a geographically accessible and affordable network for congregations and mid councils.”

Expenditures identified in the resolution create opportunities for groups and individuals, including funding for LGBTQIA+ community grants, sex education training event grants, a Research Services survey and focus group and the creation of scholarships and funding to increase the number of Black Presbyterian women scholars.

The only amendment changed language stipulating which agencies will do investment work, including “encouraging” the Board of Pension instead of “directing” it. As with other questions before committees, the Rev. Dr. Frank Spence, president of the Board of Pensions, said BOP’s independent charter precludes it being directed by the assembly, even though BOP is broadly supportive of the intent of items of business.

The Rev. Dr. Kerri Allen and the Rev. Ashley DeTar Birt, task force members, spoke to the recommendations and the historic and contemporary impetuses for the resolution.

Allen discussed the report’s added immediacy on the day after the Supreme Court’s ruling overturning Roe v. Wade, which will disproportionately harm Black women and girls. She said this resolution “moves beyond apology to the ongoing work of repair,” work with added necessity following the all-online General Assembly in 2020, when the concerns of Black women and girls were seen as relegated in favor of procedural expediency and other minimizing actions.

DeTar Birt said the church needs to do much more to meet the needs of Black women and girls, including trans women and girls. Those communities have collective interests and shared history but consist of individuals who “are not a monolith. We need to be recognized fully as individuals.”

Developing theology and worship resources that educate congregations in Rites of Passage and a primer/introduction to Black women and other women of color, as well as providing resources for awareness and sensitivity around intersections of race/gender/sexual orientation, are some of the recommendations DeTar Birt addressed. 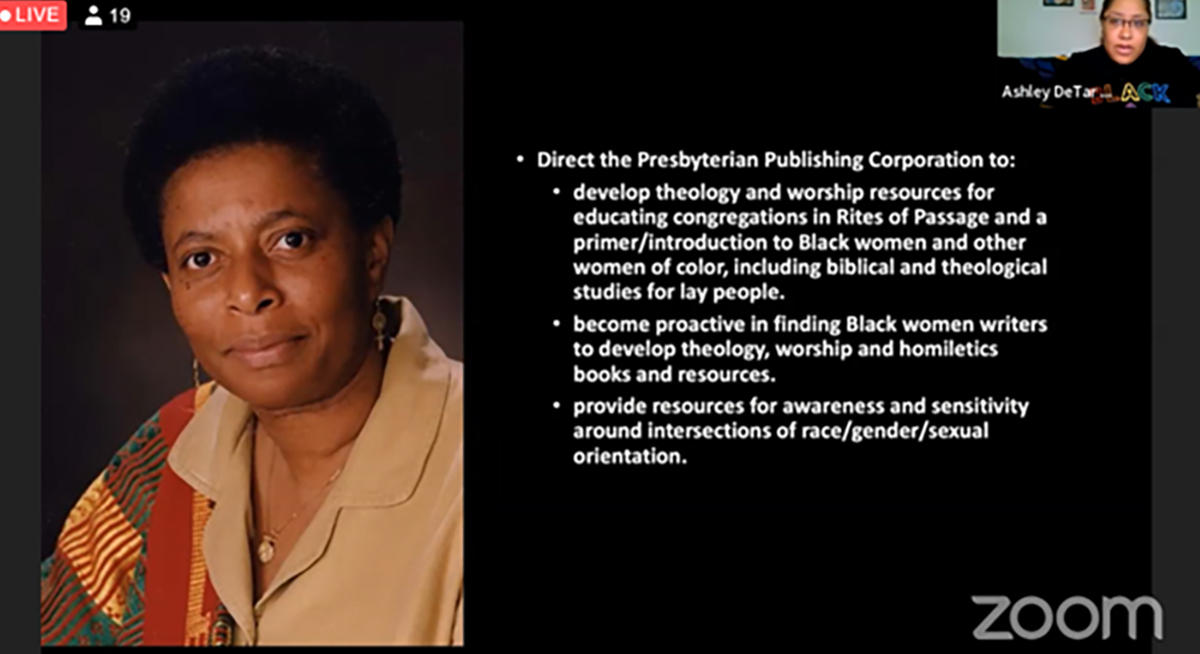 After discussion by commissioners and advisory delegates and the approval of the amended language to Recommendation 2, the committee voted unanimously to approve the resolution with 32 yes votes.

The committee moved to [RGJ-11] A Resolution on Racism as a Public Health Crisis. Flora Wilson Bridges, from the Racial Equity Advocacy Committee, introduced the resolution, citing a “need for the PC(USA) to claim and reclaim the ministry of health and healing.”

“Racial discrimination continues to persist in medicine,” Bridges said, going on to discuss the connection between racism and agism, which has been especially harmful in Black and Native communities during the pandemic. Like Allen, Bridges spoke about Roe v. Wade and its wide and disproportionate impact on the public health of communities of color.

RGJ-11 directs PMA to raise the church’s consciousness about racism as a public health crisis. It also directs investment in healthy public policies and divestment in unhealthy ones.

Madison McKinney, of the Advocacy Committee for Women’s Concerns, also spoke in support of the resolution. “This is about race playing a huge part in the statistics of death” specific to Black and Native communities, she said.

A committee member from Minneapolis-St. Paul connected the resolution to the deaths of George Floyd and Daunte Wright, saying that if those killings didn’t point to the public health crisis the resolution addresses, nothing does.

After one minor amendment, the committee voted unanimously to approve the main motion, with 33 yes votes.

Later in the morning it was time for [RGJ-14] On Violence and Hate Against Asian Americans and Pacific Islanders, the last item of business. 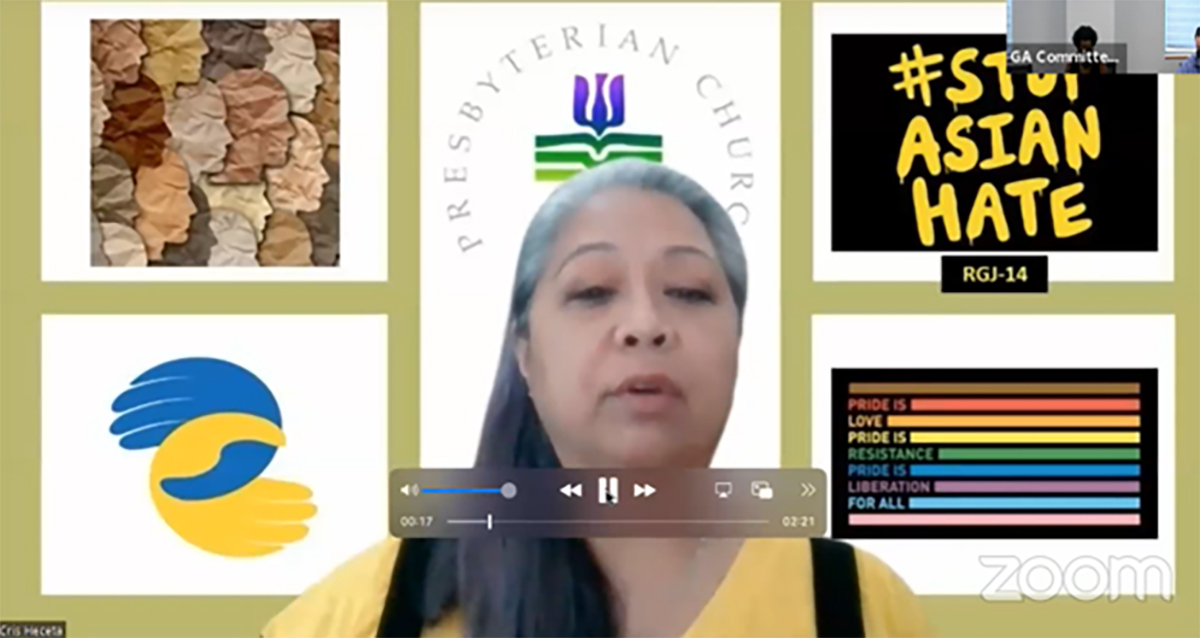 She continued, “We are considered the model minority. So much of what happens to us gets swept under the rug.” Heceta said the PC(USA)’s response to acts of violence against the Asian American, Native Hawaiian and Pacific Islander (AA, NH, PI) community is quiet compared to its stances following acts against other groups.

Donald Hammond, co-sponsor of the commissioners resolution from San Francisco Presbytery, talked about the church he serves in San Francisco’s Chinatown, and also of the “model minority myth,” which he said contributes to the violence perpetuated against Asian American community members.

A commissioner spoke about the increase of Asian hate since the pandemic, and asked for a “clear call of honesty” regarding the resolution, which connects to the other work the committee had approved to address the sin of racism. Another committee member spoke about his fear traveling to Louisville — not because of the pandemic but because of his being Asian.

Committee vice-moderator Lori Yamauchi, a cosponsor of the commissioners resolution, reviewed many of the 15 recommendations, including hiring AANHPI ministry leaders at congregations to respond to the spike in violence and understanding the model minority myth as a falsehood that presents the diverse communities as monolithic.

One point of discussion was the best way to refer to the impacted community in the resolution, with resource staff and resolution presenters and supporters discussing reasons to “decouple” the groups — Asian American, Native Hawaiian and Pacific Islander. In the end the committee inserted commas between AA, NH and PI. Another amendment replaced “condemn” (the PC(USA)’s unwillingness to lead on addressing anti AA, NH, PI racism) with “confess and acknowledge.”

The Rev. Dr. Neal Presa, moderator of the 220th General Assembly, addressed the group during the amendment process, asking it to tell the full assembly during plenary that different communities named in the resolution, while distinct, have suffered a shared history of violence.

When the time came to vote on the amended RGJ-14, the committee approved it with 31 yes votes. The final motion before the committee carried unanimously.

Committee moderator Willye Bryan encouraged committee members to congratulate each other for completing their work ahead of schedule. Vice Moderator Yamauchi passed out parting gifts.

“They are goodie bags from San Francisco,” she said to woos. “They’re really not that big a deal,” she added to laughter.

Inside the bags were fortune cookies with messages thanking the members for their work on the Race and Gender Justice Committee.

Commissioners, advisory delegates and resource staff cracked their cookies or saved them for later, after closing worship.