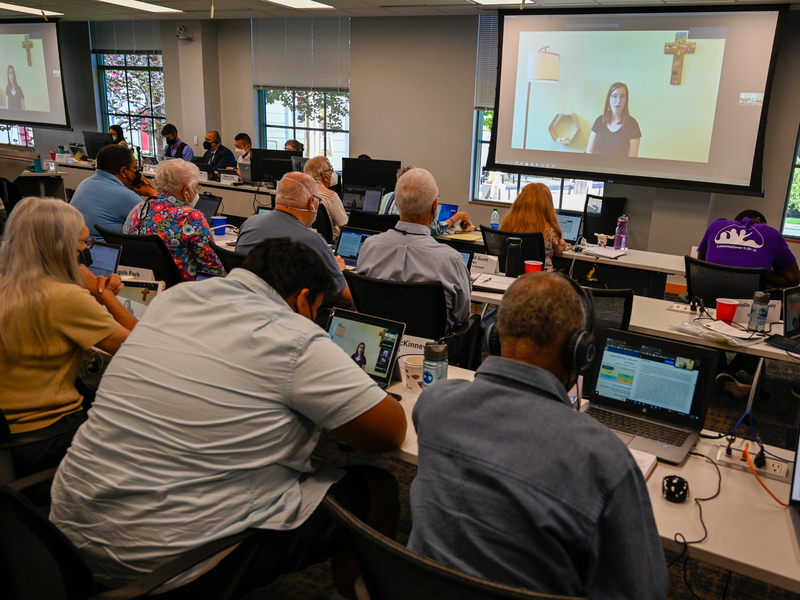 The Environmental Justice Committee observes an overture advocate presentation during its hybrid meeting on June 23, 2022, at the 225th General Assembly in Louisville, Kentucky. (Photo by Rich Copley)

The Environmental Justice Committee observes an overture advocate presentation during its hybrid meeting on June 23, 2022, at the 225th General Assembly in Louisville, Kentucky. (Photo by Rich Copley)

The Environmental Justice Committee of the 225th General Assembly concluded its business on Saturday after creating a revised version of ENV-09 that embraces selective divestment as “the most effective leverage” for holding companies responsible when it comes to protecting the planet through “active engagement.”

But the Rev. Jed Koball, a mission advisory delegate from Peru, cautioned the committee, before the final vote, that it might get pushback on the floor of the General Assembly floor for clinging to a process that has been criticized as too slow. “We don’t have the time to be debating these things and going through a yearslong process,” he said. “We gotta move.”

The 33–2 approval of Seattle Presbytery’s ENV-09, On Actions in Support of an Energy Transition, followed an arduous day of discussion on Friday about whether the Presbyterian Church (U.S.A.) should go with  selective divestment or opt for complete or categorical divestment from fossil fuels, or something closer to that.

The committee departed Friday without acting on several overtures related to the topic, but a work group forged ahead and brought back draft language to the whole committee Saturday morning to address ENV-01, ENV-07, ENV-08, ENV-09 and ENV-06.

“The work group that got together last night was amazing,” said the Rev. Rachel Crumley, a commissioner from Shenandoah Presbytery, who summarized their efforts to the committee. “We had fun and worked hard, and I just thank you,” including “those of you that participated, those of you who gave input, and all of that.”

The committee could have chosen to create a whole new overture but decided to amend ENV-09 to incorporate proposed changes from overnight and come up with the ultimate version of the overture, which answers ENV-06, 01, 07 and 08, with comment.

The document says, in part, “The Environmental Justice Committee of the 225th General Assembly recognizes the faithful conviction, passion, and work from over 40 presbyteries which resulted in resolutions and concurrences presented to the Committee. We pray that the amended Resolution ENV-09 ‘On Actions in Support of an Energy Transition’ will address the urgent and critical environmental issues raised in the resolutions which it seeks to answer. We also affirm and underscore the biblical mandate to care for the Earth and all of God’s creatures especially in this critical time, and we believe the amended Resolution ENV-09 supports selected divestment while also continuing to apply pressure as advocates with corporations in need of reform.”

The approval was in line with action taken by the committee on Thursday night when it approved ENV-10, a recommendation from the Presbyterian Committee on Mission Responsibility Through Investment (MRTI) that five companies — Chevron, ExxonMobil, Marathon Petroleum, Phillips 66 and Valero Energy — be added to the General Assembly’s Divestment/Proscription List for failing to meet standards aimed at protecting the planet from climate change.

ENV-09 directs the Presbyterian Mission Agency to equip pastors with an easy-to-understand resource on MRTI’s process to help the pastors communicate with their congregations and perhaps reduce the chances of division.

MRTI recommends divestment only after it works to engage with what are known as Climate Action 100+ companies to encourage them to adopt better environmental and human rights policies and practices. By that point, MRTI no longer believes that meaningful progress will occur through continued shareholder engagement, though monitoring can occur to see if the companies improve.

Some presbyteries, however, have wanted the church to go further. For example, Hudson River Presbytery brought forth ENV-07, which had 29 concurrences and called for the PC(USA), the Presbyterian Foundation, the Board of Pensions, and the Presbyterian Investment and Loan Program to divest from the fossil fuel industry, using the Carbon Underground 200 and the S&P Global Industry Classification Standard’s list of publicly traded companies engaged in coal, oil and gas exploration, extraction and production as the criteria to identify which companies that are considered to be fossil fuel companies.

Although the committee opted not to go that route, ENV-09 does request that the Stated Clerk, in partnership with MRTI, reach out to the top 50 historic emitters to reflect on and acknowledge their emission contributions to global warming and become a proportional part of the energy transition to clean fuels and align with the Paris Agreement.

ENV-09 also includes a disclaimer, of sorts, that says, “We acknowledge that these measures are inadequate to the urgency and level of crisis before us and we therefore urge our congregations and members to become the needed, faithful change we seek by being carbon neutral, net-zero, or even climate positive by 2030.” Further steps include encouraging “congregations with historic or landmark buildings to retrofit their structures to the furthest extent possible” and a reference to “continuing at a faster pace towards a world divested from fossil fuels.”

Making sure that a sense of urgency was communicated was important to people like Marta Pumroy, a theological student advisory delegate from Austin Presbyterian Theological Seminary.

“The urgency is what a lot of the people who have brought these overtures to us are asking for,” she said during the proceeding, “and I’ve experienced in my hometown of Cedar Rapids, Iowa, two natural disasters within 15 years, and there are many people who need this work done yesterday and not today,” so it’s important for “everyone to know that we do know that this is an urgent matter and we're not moving fast enough.”