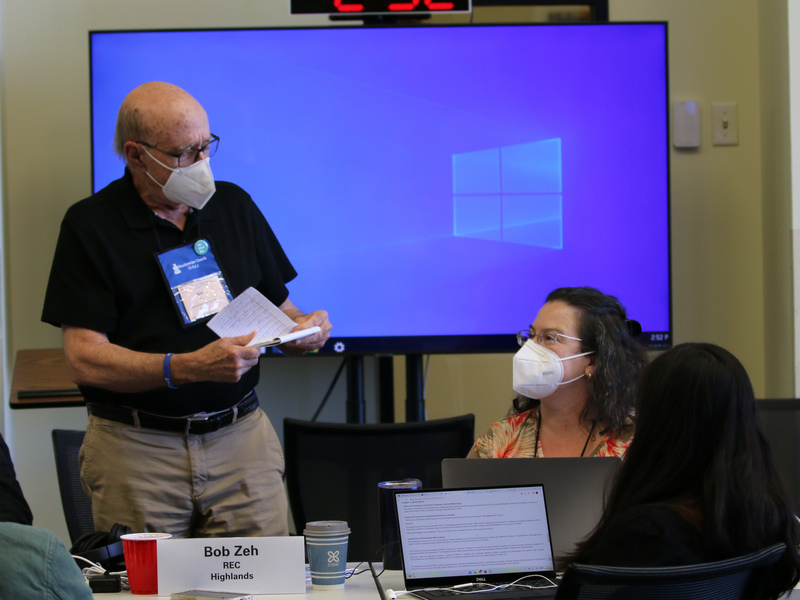 Ruling Elder Bob Zeh presents during the Committee on Ecumenical and Interfaith Engagement meeting on June 27, 2022, at the 225th General Assembly of the Presbyterian Church (U.S.A.) in Louisville, Kentucky. (Photo by Randy Hobson)

Ruling Elder Bob Zeh presents during the Committee on Ecumenical and Interfaith Engagement meeting on June 27, 2022, at the 225th General Assembly of the Presbyterian Church (U.S.A.) in Louisville, Kentucky. (Photo by Randy Hobson)

As the Ecumenical and Interfaith Engagement Committee sped toward its final vote Monday, an hour ahead of schedule, Moderator Frances Lin observed, “You guys are very agreeable.”

In its first day of business at the 225th General Assembly of the Presbyterian Church (U.S.A.), the committee approved three overtures and several information items. They included:

Presbyterian World Mission and WCC representatives, including former Presbyterian Ministry at the United Nations coordinator Ryan Smith, spoke to the challenges faced by Palestinian Christians, including harassment and threats of violence.

“I do welcome this initiative,” said Peter Prove, director of the WCC Commission of the Churches on International Affairs. “But I think that what we especially need is wisdom, and suggestions, and advice, and support, and resources from the global fellowship of churches around the world to actually do something beyond statements.

“Because indeed, in terms of sustaining the Christian presence in the Holy Land, what is most important to support are the institutions of the Church, of the Christian communities, the schools, the training facilities, the employment opportunities that will sustain their presence. And the larger context in which this must be addressed is, of course, the political situation, the ongoing occupation, which is itself an important driver of Christian exodus from the Holy Land.”

The committee stalled a bit after lunch and quickly approving minutes from the General Assembly Committee on Ecumenical and Interreligious Relations with comment. There was some discussion and study of ECU-02, which is about exploring a formula for establishing relationships with denominations around the world, and ECU-03, which is about exploring the same type of relationship with a Ghanaian church. Several committee leaders and members commented that 03 could be answered by 02, but the committee was unable to move forward on the overtures because overture advocates were not scheduled to speak to the group until Wednesday.

On Tuesday, the committee is slated to address two overtures:

The Ecumenical and Interfaith Engagement Committee begins work at 9:30 a.m. ET Tuesday, and you can watch the meeting by clicking here.

As the committee departed for an early break, Lin joked, “Please come back tomorrow.”