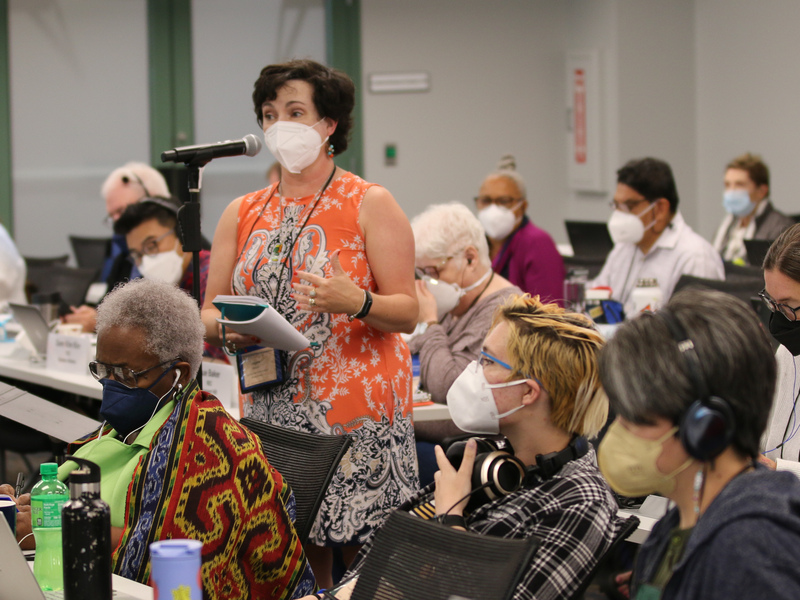 The tragic deaths of at least 51 immigrants in a trailer in San Antonio loomed large Tuesday for the General Assembly’s Immigration Committee, which prayed for the victims before beginning its formal business and expressed deep sadness.

“I imagine that each of us is horrified and as heartbroken as I am to hear the story,” Moderator Virginia “Ginna” Bairby as the committee’s work was just beginning. “Please feel that heartbreak, that horror, that rage. Let it move you to tears. Let it take your breath away. Holy anger and grief are the fire that makes our work possible, so let's conduct our business today with renewed commitment to the urgency and importance of this work.

She continued, “In worship this morning and throughout the day, we will pray for these siblings of ours who died along the journey and for all who grieve them, and may we go into this … empowered by the Holy Spirit. And knowing that the work we do is truly a matter of life or death.”

By the conclusion of the day, the committee had wrapped up the rest of its business — a day early — and passed three items as amended:

IMM-09: A Resolution Supporting Immigration/Refugee Justice Work in the PC(USA), which encourages continued collaboration between the Presbyterian Mission Agency and the Office of General Assembly to maintain and strengthen the work of the church as well as partners. This includes ecumenical and interfaith partners working on the border, including those working “in countries of origin and transit.” (Vote: 39-0)

IMM-08: Regarding the Treatment of Refugees (Vote: 38-0) which encourages the Stated Clerk, Office of Public Witness and Office of Immigration Issues to advocate for immigration officials to release detainees, during the pandemic and similar situations, who are not indicted for violent felonies and to make a budget increase of $250,000 for improved staffing and resources.

IMM-06: On Declaring the Presbyterian Church (U.S.A.) to Be a Sanctuary and Accompaniment Church (Vote: 36-3)

Perhaps the heaviest discussion occurred as the committee was debating about what should be the final form of IMM-06. The discussion hinged on whether to stick close to the original language of the overture or to go with different language that some committee members didn’t think was strong enough.

The committee ultimately decided to retain this language: “We do hereby declare the Presbyterian Church (U.S.A.) to be a ‘Sanctuary and Accompaniment Church’ that supports and encourages its congregations, mid councils, and members to support immigrants, refugees, asylum seekers, and their children, and to resist efforts by the government to separate families.”

New language was inserted that calls for the churches and other local entities to be informed of “the legal risks associated with doing so,” while serving as places of welcome, refuge, accompaniment and healing.

Other new language talks about advising “congregations that become sanctuary churches that they may need extra, external financial assistance, especially if providing sanctuary embroils them unavoidably in legal difficulties.”

In response to some questions, the committee was assured that local churches would not be required to become sanctuary churches. However, multiple people still expressed trepidation.

One of them, Commissioner Julie Allport of Donegal Presbytery, noted that it’s important to “think about the perception” that might result.

“Even though we have been assured by our legal advisors that the church cannot force any congregations or mid councils or presbyteries to engage in something that they do not feel comfortable with,” the more declarative language “could cause discord,” she said, adding, “Remember that saying about catching more flies with honey than with vinegar?” She noted that it would be “a bit more encouraging” to go with an amendment that was being considered with language about embracing the principles and actions associated with accompaniment.

Kymberlaine Banks, commissioner from Grace Presbytery in Texas, spoke strongly in favor of the original language.

“I identify as a Black, cisgendered female Baby Boomer,” she said. “I live in a nation that was built on stolen land, with stolen labor. … The immigration laws that we've been talking about, we all understand to be disproportionately impactful to Black, Indigenous and People of Color. The need to protect those that we know to be vulnerable shouldn't be watered down. This is not about honey; this is about people's lives. Fifty people are dead in the state I live in today. Watering this down, in this way — and it softens it very much — is offensive.”

In a similar vein, earlier, the Rev. Dr. Neddy Astudillo, a commissioner from Tampa Bay Presbytery, said softening the language would not protect the people the church is called to protect.

“We are protecting perhaps ourselves as a church, trying to figure out how to survive in the midst of a world in crisis or an immigration crisis,” she said. “I was a pastor for 14 years of a Latino congregation” and the stronger language would have been helpful (to her).

It also would benefit those pastors who need the denomination’s support “to figure out how to have these conversations on immigration with a community that perhaps is very conservative and does not want to talk about … root causes of the immigration crisis” nor the U.S. role in it, she said. “I think we are being called to protect the vulnerable, the voiceless — and we're being called to be a prophetic church.”