Israel and Palestine dominate the attention of the International Engagement Committee 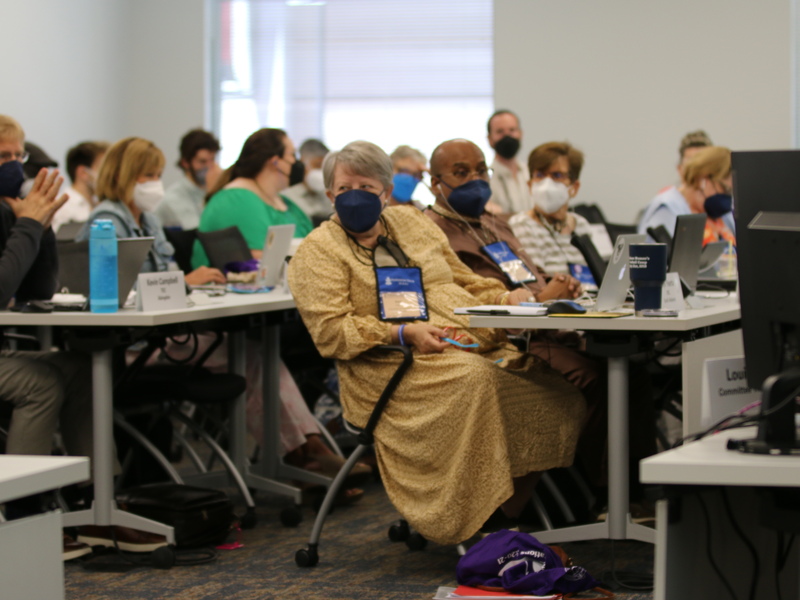 When the Committee on International Engagement kicked off its second day of business on Tuesday, the initial focus was two overtures related to the Korean Peninsula and Presbyterian efforts to engage with partners, both faith-based and secular, toward creating a peace treaty.

INT-12: Regarding a Korean Peace Treaty was answered with action on INT-15: On Advocating for a Peace Agreement in the Korean Peninsula, which passed unanimously as written. Sponsored by Cayuga-Syracuse Presbytery, INT-15 calls for an endorsement of the Korea Peace Appeal and for individual Presbyterians, presbyteries and synods to add their signature to the campaign. A financial commitment of $7,350 is attached to the overture for the Presbyterian Mission Agency to update existing resources and create new ones, including a video, that articulate the realities of the 70-year-old Korean conflict.

The committee moved on to INT-16: Resolution on Sanctions—From the Advisory Committee on Social Witness Policy, which directs relevant PC(USA) agencies to review all current policies endorsing the use of sanctions and determine that the sanctions do not cause undue harm to civilian populations. It also requests that the assembly support legislation that provides more oversight and analysis about the effects of sanctions on populations.

An amendment was offered that would “encourage the Office of Public Witness to advocate with both the executive and legislative branches of the United States government for policies in support of the goals outlined in the above recommendations.” The amended overture passed unanimously.

Four overture advocates spoke to INT-11: Responding to the Human Needs of Those Affected by the Crisis in Syria. In a vein similar to INT-16, the recommendations from INT-11 included working to end sanctions in Syria. It also recommended promoting reconstruction in Syria and working toward the safe return of refugees and internally displaced people.

Pauline Coffman, overture advocate from Chicago Presbytery, called for negotiation instead of sanctions in her support of INT-11 and referenced an extraordinarily successful post-World War II policy as an example.

“Overture 11 calls for negotiation to settle disputes, not war and not sanctions. Sanctions in effect are another form of war. Remember the Marshall Plan? The Marshall Plan sent millions of dollars of aid to Germany after World War II to help them recover. Certainly, the moral rightness of helping instead of exacerbating need is what our faith calls us to do,” said Coffman.

The Rev. Dr. Laurie Kraus, associate mission director of the Compassion, Peace, and Justice ministry and director of Presbyterian Disaster Assistance, urged the church to continue to be generous in their giving and support of our siblings in Lebanon and Syria. Kraus noted the church has been more than generous in support of Ukraine, but that it is a struggle to continue to raise money for a war that has gone on 11 years.

“There are still 1.5 million refugees from Syria in Lebanon,” said Kraus. “Both countries desperately need our continued fidelity in partnership.”

The day’s heavy lifting commenced after lunch with four overtures about Israel and Palestine. INT-04: Jerusalem 3,2,1: Three Faiths, Two Peoples, and One Human Family—From the Advisory Committee on Social Witness Policy was first. The overture recommendation consisted of two items: “Summary Statement of Concern: For the Peace of Jerusalem” and the approval of 13 action items.

There was considerable discussion over the definition of apartheid and how to condemn oppressive parties and human rights violations without condemning an entire population.

The Rev. Kathy Lee-Cornell, commissioner from Grace Presbytery, summarized her small group’s discussion about the issues before them. “We recognize that there is most certainly a rise in antisemitism in our country during these times. So how do we condemn oppressive practices and human rights violations without condemning a whole people group? Does the language before us distinguish claims about behavior from claims about people?”

After continued discussion, the committee passed the overture unanimously without amendment.

INT-02: On Recognition That Israel’s Laws, Policies, and Practices Constitute Apartheid Against the Palestinian People was discussed extensively, with debate centered again on the legal definition of apartheid and whether its language was clear enough about admonishing Israeli government policies — and not the Israeli people. The discussion got bogged down in parliamentary procedure when a substitute motion was offered to replace the original overture language. Nicole Wilkinson, from Southern New Jersey Presbytery, recommended new language that viewed the suffering of Palestinians and the Israel-Palestine conflict from the lens or perspective of the United States’ own history with racism and inequity.

“In consultation with several of my colleagues, we thought it might be helpful [to add] an introductory paragraph saying we understand what racism looks like and what apartheid looks like because of our own experience in the United States, and also saying that gives us a perspective to know what it looks like and we do see it here,” said Wilkinson.

But the idea to add that paragraph received pushback and was deemed as “watering down” the work of Grace Presbytery, overture sponsor, so it was voted down. INT-02 was approved with an amended version of the original overture, which recognizes that the “government of” Israel’s laws, policies, and practices regarding the Palestinian people fulfill the international legal definition of apartheid.

INT-13: On Designating May 15 as the Palestinian Nakba Remembrance Day was approved with an amendment to the motion directing the Presbyterian Mission Agency, and not the Stated Clerk, to make the designation. It also added the comment that Palestinian Nakba Remembrance Day was included in the 2021–2022 Presbyterian Planning Calendar and will appear in future versions.

INT-10: A Call for Ending the Siege of Gaza and Collective Punishment of Innocent Palestinian and Israeli Citizens passed unanimously with no amendments or comments added to the overture.

The committee closed its business in prayer and reflection and will address two remaining overtures during its final day of business on Wednesday.