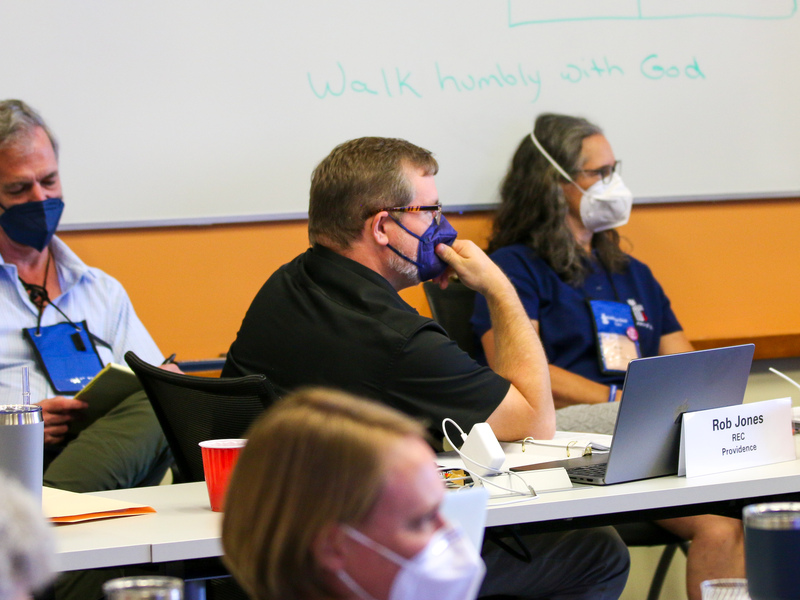 Ruling Elder Rob Jones of Providence Presbtyery watches presentations from small groups during the Committee on Ecumenical and Interfaith Engagement meeting on June 27, 2022 at the 225th General Assembly of the Presbyterian Church (U.S.A.) in Louisville, Kentucky. (Photo by Randy Hobson)

Ruling Elder Rob Jones of Providence Presbtyery watches presentations from small groups during the Committee on Ecumenical and Interfaith Engagement meeting on June 27, 2022 at the 225th General Assembly of the Presbyterian Church (U.S.A.) in Louisville, Kentucky. (Photo by Randy Hobson)

The Ecumenical and Interfaith Engagement Committee approved resolutions denouncing antisemitism and Islamophobia and affirming Interfaith/Interreligious relationships on its second day of business at the 225th General Assembly of the Presbyterian Church (U.S.A.).

The committee’s morning work was largely devoted to ECU-06, Distribution of Study Document on Denouncing Antisemitism and Islamophobia.

The Rev. Anne Weirich, a member of the General Assembly Committee on Ecumenical and Interreligious Relations (GACEIR), which sponsored the overture, said the statement emerged in the aftermath of the 2018 shooting at the Tree of Life Synagogue in Pittsburgh, which killed 11 people and wounded six, including several Holocaust survivors.

“It really came from that place of saying, ‘I don't know what to do right here in my community after this horrible thing has happened. How can I approach the situation in a way that is not invasive and harmful?’” Weirich said. “We hoped that by beginning this conversation among ourselves and then for the rest of the church and our ecumenical and interreligious partners that we could find a way to become closer.”

The statement was presented by the Rev. Whitney Wilkinson Arreche, who said it came about because people who are Jewish and Muslim continue to be targeted with violence and hatred because of who they are, and many people causing harm “claim the name Christian.” It is important for Presbyterians to make this statement, she said, because:

Wilkinson Arreche emphasized that the document is not a complete work but a first step, and noted that it had been created in consultation with interfaith partners and acknowledges that though both groups experience violence and hatred, their experiences are different and necessitate different statements and actions. She and other committee members said the documents had been circulated and critiqued by partners in the Jewish and Muslim communities.

The presentation also offered a distinction between antisemitism and denunciation of the Israeli government’s abuses of Palestinians in occupied lands.

Reading from the statement, Wilkinson Arreche said, “We can hold our previously asserted commitments for Palestinian self-determination. We can critique human rights abuses by the government of Israel, and we can repent of our antisemitism. These are in no way mutually exclusive.”

The primary critique of the document by committee members centered on its presentation of history, and what was left in and out. GACEIR members noted that edits were made to meet General Assembly submission requirements and said they encouraged people who studied the document to dive deeper into the history that has led to antisemitism, Islamophobia and the church’s role in them. Moderator Frances Lin emphasized this vote was to recommend that the General Assembly receive it as a study document and distribute it to mid councils and churches for study and reflection. It was not a final statement. The overture was approved by a vote of 25 to 2.

In the late morning and afternoon, the Ecumenical and Interfaith Committee did recommend to the full Assembly that the Theological Rationale for Interreligious/Interfaith Relationships (ECU-01) become an official statement of the PC(USA), also by a 25 to 2 vote.

Despite Lin having the committee consider the statement’s eight sections individually, the committee made relatively quick work of the statement, finishing work before the committee’s scheduled afternoon break. The major discussions of the statement, which builds on the Interreligious Stance of the Presbyterian Church (U.S.A.) approved at the 221st General Assembly in 2014, focused on defining the terms interfaith and interreligious, which are used interchangeably in the document, and some rewording of the conclusion.

On Wednesday, the committee’s final day, it is set to consider:

The Ecumenical and Interfaith Engagement Committee begins work at 9:30 a.m. ET Wednesday, and you can watch the meeting by clicking here.