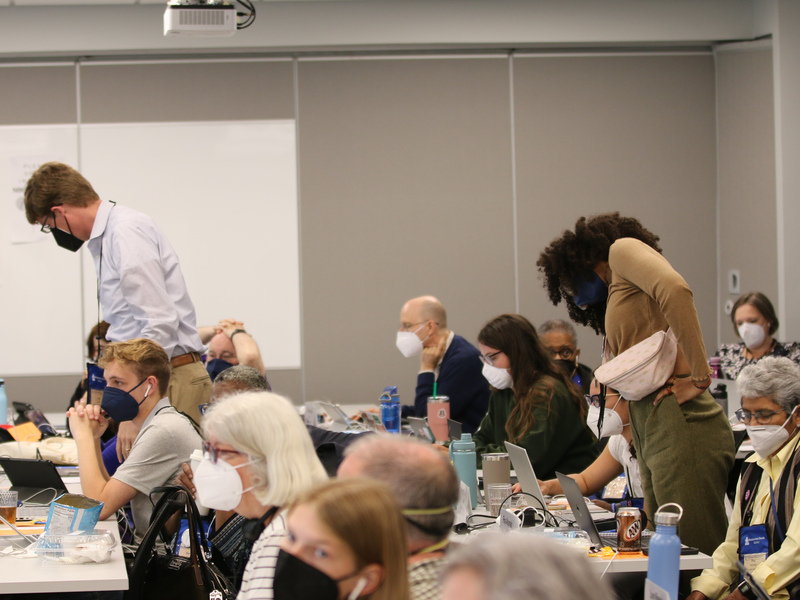 The Standing Rules of the General Assembly Committee debated two items of business at length Tuesday, recommending one for disapproval while approving another.

The long-discussed item that received the committee’s endorsement, STAN-38, regards committee moderators and vice moderators and came from the Committee on the Office of the General Assembly. If approved in plenary, it will require GA co-moderators to give consideration when appointing committee leadership to all gender identities, with women comprising at least half of the moderator positions.

In a comment also receiving approval, committee members said they’d “considered over a two-day period how to be intentionally inclusive of people of all gender identities … They discussed that when only women and men are explicitly named in the Standing Rules, those who do not identify as women or men may not feel included in the work and leadership of the General Assembly.”

Also receiving hours of discussion was STAN-07, on which the committee voted 30-2 to recommend disapproval. That COGA proposal would have changed the Standing Rules to allow the actions of the General Assembly to be carried out by standing committees, commissions and entities. COGA wanted the change in part because the 223rd General Assembly (2018) approved no less than 19 special committees or commissions. Not all could even get to work because there weren’t enough people to fill all the slots. Funding and finding national staff to serve each of those special committees and commissions also proved to be difficult.

The Racial Equity Advocacy Committee recommended disapproval. “If special committees and task forces are eliminated then people with power and of the majority culture will have more access to the decision-making process,” the committee wrote in a comment. “Financial reasons for eliminating and/or disregarding programs and policies that affect people of color continue to be an excuse to prevent people of color and communities of color from obtaining any degree of equity.”

“We know white supremacy is the air we breathe,” the Rev. Michelle Hwang, REAC chair, told the committee. “If we are going to live into the call to work toward racial justice, we can’t assume any of our siblings will have the self-awareness to take in the marginalized.”

“Having heard your conversations and from colleagues, our sense is you will want to disapprove this item,” said the Rev. Stephanie Anthony, COGA moderator, who proved to be prescient.

The bigger issue, said the Rev. Andy James, a COGA member, “has been we’re unable to find people to serve on special committees.”

STAN-06, regarding the creation of special committees and commissions.

STAN-33, regarding electronic meetings. This item enables meetings of the General Assembly to be conducted by means of electronic communications equipment, by gathering in a central location, or both.

STAN-14, regarding limits on debate. Limits to debate apply to all people recognized by the moderator for any purpose, including resource persons and corresponding members.

STAN-15, regarding the presentation of the per capita budget. If on the final day of the assembly commissioners approve a budget that does not adequately fund the estimated financial implications of new actions, all new items will be “scaled in proportion” to the amended per capita budget.

STAN-17, regarding the coordination of presentations. Under this proposed change to the Standing Rules, the presenters of a committee’s recommendation and the minority report are to coordinate their presentations so that the assembly can “best understand the particular issues at hand and keep them as equal in length as possible.”

STAN-18, regarding financial implications. This change authorizes GA entities to “set a budget and/or scale the work mandated by the assembly to fit the budget approved by the assembly in consultation with their elected boards/committees.”